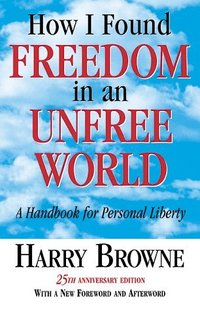 Source of book image: Amazon.com.
Harry Browne died Wednesday, on March 1, 2006, of Lou Gehrig’s disease.
Every semester I mention Browne to students in most of my classes. I tell them of his bestseller, How I Found Freedom in an Unfree World.
I have not read the book for many years. My memory is that Browne tells of how he was unhappy in a high-paying investment career because he did not like having to report to the job on set days, at set times, and to take orders he sometimes did not agree with, from bosses he did not always respect.
He did not feel free, and he he felt that being unfree was making him unhappy. So he quit, his job, divorced his wife, and headed west to write best-selling self-help books.
I tell my students that we don’t have to go as far as Browne did in order to sympathize with his wishing he was not constrained by the firm that had employed him. So I ask my students: given the appeal of Browne’s sentiments, why do we have firms? Why don’t we all just become independent contractors?
The answer, I tell them, is to be found in Ronald Coase’s article “The Theory of the Firm,” in which Coase suggests that firms reduce the transaction costs of team production activities.
I also mention, though, that developments in information technology and the internet, are reducing the transactions costs of creating production teams on a project-by-project basis, and hence are increasing the feasibility of more and more of us becoming independent contractors, or at least working for small firms.
In this regard, I refer them to an article co-authored by Brynjolfsson that argues that IT has differentailly benefitted the small firm, and I refer them to Daniel Pink’s Free Agent Nation. I also mention web sites like guru.com that make it possible for those who want to work as free-agents to find firms that want to hire them on a project-by-project basis. I tell them about the movie industry, that already pretty much assembles teams on a project-by-project basis.
The world may never be the way Harry Browne wanted it to be. But it may be possible to come closer to Browne’s vision, than Browne’s detractors imagined.
Besides his book Harry Browne served the cause of freedom in other ways as well, running for President in 1996 and 2000 on the Libertarian Party ticket.
I do not completely share Browne’s views: sometimes he seems to treat personal commitments too cavalierly. But he wrote well, he stimulated thought, and he sought to make the world a better place. Harry Browne, rest in peace.

Environmentalists have hypothesized that there is a link between harvesting old-growth forests and declines in owl populations. But there is reason to believe that the hypothesis may be false, and apparently environmentalists and the federal government do not have much interest in testing it:

. . . , we know little about the relationship between harvesting and owl populations. One such study — privately funded — infers an inverse relationship between harvesting and owls. In other words, in areas where some harvesting has occurred, owl numbers are increasing a bit, or at least holding their own, while numbers are declining in areas where no harvesting has occurred.
This news will come as no surprise to Oregon, Washington and California timberland owners who are legally required to provide habitat for owls. Their actively managed lands are home to the highest reproductive rates ever recorded for spotted owls. Why is this?
One possible answer is that the anecdotal evidence on which the listing decision was based is incomplete. No one denies the presence of owls in old-growth forests, but what about the owls that are prospering in managed forests and in forests where little old growth remains? Could it be that spotted owls are more resourceful than we think?
We don’t know — and the reason we don’t know is that 16 years ago federal scientists chose to politicize their hypothesis rather than test it rigorously, to flatly reject critiques from biometricians who questioned the statistical validity of the evidence on which the listing decision was based, and to declare with by-god certainty that once the old-growth harvest stopped owl populations would begin to recover. 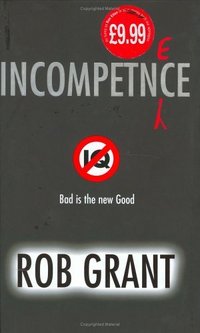 The source for the book cover image is: Amazon.com.
The brief book description on Amazon. com:

Bad is the new good. In the not too distant future the European Union enacts its most far reaching human rights legislation ever. The incompetent have been persecuted for too long. After all it’s not their fault they can’t do it right, is it? So it is made illegal to sack or otherwise discriminate against anyone for being incompetent. And now a murder has been committed and our possibly incompetent detective must find out who the murderer is. As long as he can find directions to get him through the mean streets.