Mr. Koch’s latest crusade to spread the ideas of liberty has been his sponsorship of a twice-yearly conference that gathers together many of the most successful American entrepreneurs, from T. Boone Pickens to former Circuit City CEO Rick Sharp.  The objective is to encourage these captains of industry to help fund free-market groups devoted to protecting the fragile infrastructure of liberty.  That task seems especially critical given that so many of the global superrich, like George Soros and Warren Buffett, finance institutions that undermine the very system of capitalism that made their success possible.  Isn’t this just the usual rich liberal guilt, I ask.  "No," he says, "I think they simply haven’t been sufficiently exposed to the ideas of liberty." 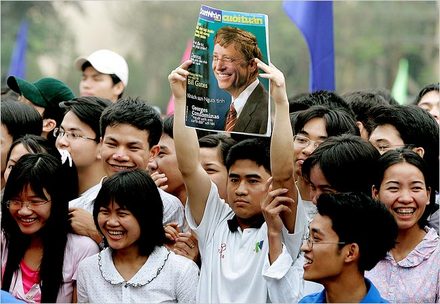 HANOI, Vietnam, April 26 — It was Lenin’s birthday.  The most important Communist Party meeting in five years was under way. And the star of the show was the world’s most famous capitalist, Bill Gates.

The president, the prime minister and the deputy prime minister all excused themselves from the party meeting on Saturday to have their pictures taken with Mr. Gates, who has more star power in Vietnam than any of them.

When people heard he was in town, hundreds climbed trees and pushed through police lines to get a glimpse of him.  He was the subject of the lead article in the next day’s newspapers.

This is where Vietnam stands today, moving cautiously toward a new version of communism while the people and their leaders lunge eagerly for the brass ring of capitalist development.

"That was very symbolic," said Le Dang Doanh, an official in the Ministry of Planning, speaking of the reception for Mr. Gates.  "It is a very clear sign of the new mood of society and the people.  Everybody wants to be like Bill Gates."

Note:  the version of the article above corrects an error in the print version that had misidentified the day of Lenin’s birth, and Gates visit as a Sunday (it was a Saturday).