JACQUELINE NOVOGRATZ, a veteran of the Rockefeller Foundation and a former consultant to the World Bank, talks enthusiastically about the development of a company in Africa where some 2,000 women earn, on average, $1.80 a day producing antimalarial bed netting.  With the assistance of a $350,000 loan from an American investor, the business started making the nets nearly three years ago and is likely to add 1,000 more jobs within the next year.

”They’re in the process of building a real company town there,” Ms. Novogratz said.

Ms. Novogratz is not an outsourcing executive at a multinational company.  Rather, she is the chief executive of the Acumen Fund, a philanthropic start-up based in New York that uses donations to make equity investments and loans in both for-profit and nonprofit companies in impoverished countries.  One of the stars of her small portfolio is the bed-netting maker, A to Z Manufacturing, a family-owned company in Tanzania — a country where 80 percent of the population makes less than $2 a day.

”To put it in the baldest possible terms, the more sweatshops the better,” said William Easterly, professor of economics at New York University and author of ”The White Man’s Burden:  Why the West’s Efforts to Aid the Rest Have Done So Much Ill and So Little Good.”  Professor Easterly is not advocating the deliberate creation of workplaces with miserable conditions.  ”As you increase the number of factories demanding labor, wages will be driven up,” he said, and eventually such factories will not be sweatshops.

Ms. Novogratz says it can be difficult to tell well-off, philanthropy-minded Westerners that what Africa really needs is more $2-a-day jobs.  But when they understand the alternatives, she said, such concerns tend to melt away.  Before they found work at the netting factory in Tanzania, for example, many of the women were street vendors or domestic workers and earned less than $1 a day.  A to Z’s wages place the women in Tanzania’s top quartile of earners, Ms. Novogratz said.

(p. 1)  New research from around the world has begun to reveal a picture of humans today that is so different from what it was in the past that scientists say they are startled.  Over the past 100 years, says one researcher, Robert W. Fogel of the University of Chicago, humans in the industrialized world have undergone “a form of evolution that is unique not only to humankind, but unique among the 7,000 or so generations of humans who have ever inhabited the earth.”

People would work until they died or were so disabled that they could not continue, Dr. Fogel said. “In 1890, nearly everyone died on the job, and if they lived long enough not to die on the job, the average age of retirement was 85,” he said. Now the average age is 62.

A century ago, most people were farmers, laborers or artisans who were exposed constantly to dust and fumes, Dr. Costa said. “I think there is just this long-term scarring.”

Source of graphic:  online version of the NYT article cited above. 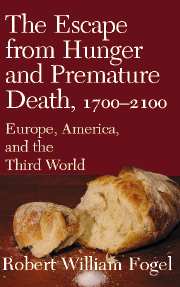 Source of graphic:  online version of the NYT article cited above.  Source of book image:  http://www.cambridge.org/us/catalogue/catalogue.asp?isbn=0521808782

Fogel’s book is a primary academic source for much of what is interesting in the New York Times article.  Fogel predicts that if we don’t screw things up, half of today’s college students will live to be 100.  He shows that academics in the past have consistently and significantly underestimated the maximum lifespans that would be attainable in the future.

The full reference for the Fogel book is:

Residents of El Estor, a small Q’eqchi community of 40,000 people located in northeast Guatemala, cheered when they heard that Vancouver-based Skye Resources was interested in reopening a local abandoned nickel mine.  According to local press, the town’s mayor and several community leaders led a rally last September in favor of the mine with a banner that read, "El Estor says yes to responsible mining."

It’s easy to see why there was such excitement. Skye Resources estimates that it will employ 1,000 people and create four indirect jobs in the community for every new mining job.  That plus an overall investment of at least $539 million is not irrelevant for an impoverished town with one of the highest illiteracy rates in the country — over 40% for indigenous men and 35% for indigenous women.

The festive mood didn’t last long.  Within months, opposition to the project began to swell.  Well-organized protesters were soon demanding that the Guatemalan government withdraw the mining license it had issued, alleging environmental risks and inadequate consultation with the community.

In a country with such dire needs for capital and technology to lessen the want of the poor, it is worth exploring whether such anti-mine activism truly expresses the will of the people.  Looking behind the scenes, the funding and instigation of the activism appears heavily driven by international nongovernmental organizations that end up discouraging development while trying to fulfill their own mission.