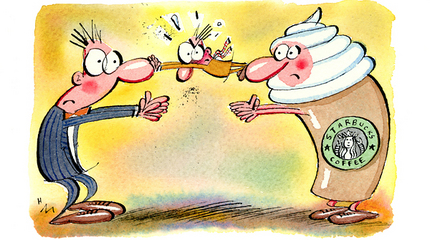 Source of illustration:  online version of the NYT article cited below.

APPARENTLY, I’m an idiot.  Every financial advice columnist seems to be telling me so.

My crime:  buying morning coffee from Starbucks for my wife and me.

Avoiding the regular cup of overpriced coffee has become an easy cliché for financial advisers, a symbol of money frittered away.  The advice has appeared just about everywhere.  Drop the caramel mocha frappu-whatever, they say, or you’ll spend your retirement testing recipes that combine Hamburger Helper and dog food.  David Bach, the author of “The Automatic Millionaire,” pushes what he calls the Latte Factor, which he has defined as “the daily extravagances that drain your resources.”  Another guru, Paul Farrell, has estimated that skipping Starbucks and compounding the savings could save you an eye-popping $500,000 by retirement.  At my own newspaper, Damon Darlin, a financial columnist, has repeatedly brought up this issue.

Before bringing up a point of disagreement — what logicians call the “Big But” — it is common to bestow a few compliments to ease the sting.  So, as a preface to the Big But, let me say that Mr. Darlin is a fine journalist and, for all I know, a swell dancer besides.

Still, I disagree.  Buy the damned coffee, if it makes you happy.  When I show up back at the house after dropping off my high schooler in the morning and I have that latte in hand for my wife, she will sometimes refer to me as “my hero!”  After more than 30 years together, this is about the only time I am called that.

(p. W4) Though scarcely known today, Andrew W. Mellon was a colossus in late 19th-century and early 20th-century America.  He would come to play a major role in the management of the American economy, but first he built one of the country’s great fortunes, one that would rank him today with Bill Gates and Warren Buffett.  He is now the subject of a comprehensive, if slightly grudging, biography by David Cannadine, the distinguished British historian.

Mellon is not associated with any single industry, in the way that Andrew Carnegie and John D. Rockefeller are.  He was a venture and equity-fund capitalist, one of the first to function on a major scale.  He and his younger brother, Dick, took over their father’s Pittsburgh-based investment and coal-mining business and expanded it into many fields, including copper, oil,  petrochemicals and aluminum (Alcoa).

No banker was as gimlet-eyed; Mr. Cannadine shows Mellon shrewdly and coldly calculating every investment prospect.  Yet few venture capitalists were as daring.  In the 1890s, when Rockefeller was ruthlessly monopolizing the petroleum industry, Mellon didn’t flinch from setting up a competing refinery.  When Mellon finally sold out to Rockefeller, he did so at a considerable profit.  Several years later he came back to oil and eventually built Gulf into an industry giant.

But Mellon was more than an entrepreneurial industrialist.  In his mid-60s he became a famous — and infamous — public servant, performing as Treasury secretary under three presidents, from 1921 to 1932.  He was the original supply-sider, pushing tax cuts under Presidents Harding and Coolidge.  He argued that the high tax rates left over from World War I were depressing economic activity; that lower rates would turn the economy around; that high-income earners would end up paying more and that low-income earners would be removed from the tax roles entirely.

His program was a fantastic success.  The top rate was cut to 25% from 77%.  The rich did indeed pay more, while low- and middle-income earners saw their tax bills shrink to nothing or next to nothing.  The economy boomed.  The U.S. outstripped more heavily taxed nations, such as Britain and France.  Mellon also pushed painstakingly for the creation of an international monetary system to replace the one shattered by World War I.  The big challenge was huge Allied war debts to the U.S. and onerous German reparations.  Mellon negotiated the easiest terms that were politically possible so that trade and economies could revive.

We sometimes forget just how dynamic the 1920s were in America.  The automobile became a commonplace item for working Americans; labor-saving devices, such as the washing machine, grew ever more common as well; movies and radio provided mass entertainment as never before (an experimental television broadcast was carried out in 1927); and stock ownership widened to include more members of the middle class.

It was a time of great innovation and inventiveness, and in a sense Mellon presided over it all by allowing it to happen without intrusive government policies.

Reference for the book: 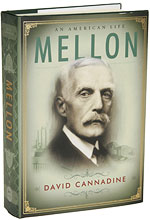 Source of book image:  online version of the WSJ article cited above.