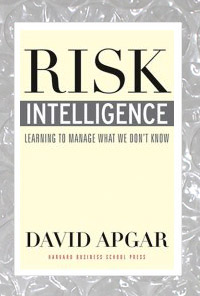 According to Mr. Apgar, managing director of the Corporate Executive Board and a former McKinsey consultant, the problem is that our traditional tool set deals only with random risk.  Equity prices, interest rates, natural catastrophes — all operate, more or less, as perfect markets, distributing risk with equal probability among all the players.  No one consistently knows more about what drives these phenomena than anyone else.  We can bear or hedge these risks in the secure sense that competitors don’t have an inside lead on the future.

In real business, though, many of the risks that can potentially wipe us out are non-random — what Mr. Apgar calls "learnable risks" — involving customers, technologies, marketing strategies, supplier relationships and so on.  The challenge is not just to learn, quickly, enough about them to survive but to determine whether someone else can learn about them even faster and thus put us out of business.

. . .   Mr. Apgar also explains how to perform a "risk audit," judging a company’s current projects by how they diversify total risk or demonstrate risk intelligence.  Here is where his program differs most widely from conventional wisdom — because, as he notes, risk diversification is no virtue if the risks are non-random and we have little intelligence of any of them.  If you don’t know much about poisonous snakes, keeping several different species won’t make you any safer.

Like liberty, risk intelligence demands eternal vigilance — and for the same reason:  threats evolve.  Mr. Apgar’s analysis of the life cycle of a business risk is particularly fruitful.  He notes that a successful company needs to maintain a risk pipeline, constantly probing into areas where it has higher risk intelligence and opportunities for real diversification — just as technology and pharmaceutical companies need a proportion of blue-sky research to innovate into the future.

Most people have of a clear image of how atherosclerosis, popularly known as hardening of the arteries, causes a heart attack — fatty deposits called plaque build up in a coronary artery until the day the blood flow that sustains the heart is blocked.

If only they were right.  In reality, severe coronary artery blockages almost always cause chest pain known as angina and other symptoms as they form.  But among those who suffer heart attacks, half of the men and two-thirds of the women report never experiencing a warning symptom.  And autopsies of such victims frequently show blood clots jammed into arteries that have been only modestly narrowed.

Standard atherosclerosis therapies include bypass surgery to route blood around blockages, angioplasty and stenting to clear blockages from inside the artery, and drugs like statins that reduce cholesterol levels to slow the formation of plaque.  But they have not been enough to prevent 200,000 to 500,000 American deaths annually from what doctors refer to as coronary artery disease.

As a result, many researchers have turned their attention from atherosclerosis in general to the tendency of some patients to develop a form of plaque prone to inflammation and rupture, which can spill a stew of cells into the bloodstream that can incite rapid clotting.  Such plaques have been called ”vulnerable” plaque.

According to the article excerpted below, Iranian tyrant Mahmoud Ahmadinejad appointed Alireza Rahai to be chancellor of Amirkabir University.  Apparently Mr. Ahmadinejad supports discussions of his doubts about the holocaust, but is not so fond of discussions of his own activities as an enemy of the open society.

Since Mr. Ahmadinejad took office, government pressure has increased on Iranians who have actively promoted changes to create a more open society.  As part of the crackdown, dozens of university students around the country have been barred from taking classes this year, and a substantial number of professors have been demoted or forced to resign.

A major reformist newspaper, Shargh, was shut down in September and several of its veteran journalists were barred from working.  The government has blocked thousands of news Web sites and blogs in an effort to limit the access of Internet users to independent news outlets.

Over the summer, Mr. Rahai, the university chancellor, had the office of a reformist student group, the Islamic Association, leveled by a bulldozer.

See also, an article on the same page:

For years, patients and many doctors assumed that a colonoscopy was a colonoscopy.  Patients who had one seldom questioned how well it was done.  The expectation was that the doctor conducting the exam would find and cut out any polyps, which are the source of most colon cancer.

But a new study, published today in The New England Journal of Medicine, provides a graphic illustration of how wrong that assumption can be, gastroenterologists say.  The study, of 12 highly experienced board-certified gastroenterologists in private practice, found some were 10 times better than others at finding adenomas, the polyps that can turn into cancer.

One factor distinguishing the physicians who found many adenomas from those who found few was the amount of time spent examining the colon, according to the study, in which the gastroenterologists kept track of the time for each exam and how many polyps they found.

They discovered that those who slowed down and took their time found more polyps.

The Rockford study was preceded by other signs that colonoscopies are by no means foolproof.   But as problems have been pointed out, they have all too often been met with disbelief among doctors, Dr. Rex said.

The first indication that colonoscopies were not as effective as widely believed came with two studies, one in 1991 and a larger one, in 1997, in which patients had two colonoscopies on the same day.  Those studies showed that doctors were missing 15 to 27 percent of adenomas, including 6 percent of large adenomas.

Dr. Schoen, for one, said he was a believer.  The conclusions of the adenoma detection studies were reinforced, he said, by studies finding that colonoscopies missed not just polyps but actual cancers.

That finding emerged from studies testing ideas about how to prevent polyps, like taking beta carotene or calcium pills or sticking to a low fat, high-fiber diet.

The patients in all the studies had at least one adenoma detected on colonoscopy but did not have cancer.  They developed cancer in the next few years, however, at the same rate as would be expected in the general population without screening.

The study by the group in Rockford suggests a way to improve colonoscopy:  by slowing down.  “If you rush things, you miss things,” Dr. Schoen said.

That happens in part because reimbursement rates for colonoscopies have fallen in recent years, and some doctors are doing the exams faster than ever, Dr. Schoen and others say.