(p. 129) Developing leaders begins with interviewing and assessing candidates. I’m not talking about overseeing the HR department and interviewing finalists; I’m talking about hands-on hiring. Most interview processes are deeply flawed. Some people interview well, and some people don’t. A person who doesn’t interview well may nonetheless be the best choice for the job. That’s why it’s so important to probe deeply, know what to listen for, and get supplemental data. It takes time and effort to drill down further, but it’s always worth the trouble. 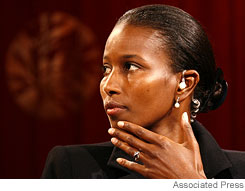 “Marked for death: Ayaan Hirsi Ali.” Source of caption and photo: online version of the WSJ commentary quoted and cited below.

(p. A15) Criticism of Islam, however, has led to violence and murder world-wide. Ayatollah Khomeini issued a fatwa calling for Muslims to kill Salman Rushdie over his 1988 book, “The Satanic Verses.” Although Mr. Rushdie has survived, two people associated with the book were stabbed, one fatally. The 2005 Danish editorial cartoons lampooning the prophet Muhammad led to numerous deaths. Dutch director Theodoor van Gogh was killed in 2004, several months after he made the film “Submission,” which described violence against women in Islamic societies. Ayaan Hirsi Ali, a former Dutch member of parliament who wrote the script for “Submission,” received death threats over the film and fled the country for the United States.
The violence Dutch officials are anticipating now is part of a broad and determined effort by the radical jihadist movement to reject the basic values of modern civilization and replace them with an extreme form of Shariah. Shariah, the legal code of Islam, governed the Muslim world in medieval times and is used to varying degrees in many nations today, especially in Saudi Arabia.
Radical jihadists are prepared to use violence against individuals to stop them from exercising their free speech rights. In some countries, converting a Muslim to another faith is a crime punishable by death. While Muslim clerics are free to preach and proselytize in the West, some Muslim nations severely restrict or forbid other faiths to do so. In addition, moderate Muslims around the world have been deemed apostates and enemies by radical jihadists.

The method of the Chicago School is often thought to be the method outlined in Friedman’s famous essay “The Methodology of Positive Economics.” It can be (and has been) persuasively argued that the actual methodology practiced by Friedman is broader, and more eclectic than that advocated in his early essay.
His practice continued to exemplify a kind of empiricism, but it was a kind of empiricism that included, not only ‘rigorous’ econometrics, but also economic history, case studies, and ‘stylized facts.’
I believe that the method of Friedman’s practice is sounder than the method of his essay. So it is unfortunate that the Institute founded in Friedman’s name will probably only support those who practice the formal method of the essay.

(p. B5) The University of Chicago will announce Thursday that it plans to establish a center for economics honoring the late economist Milton Friedman.
The school plans to raise an endowment of $200 million to support the Milton Friedman Institute.
. . .
. . . his approach to economics embodies what has come to be known as the Chicago School. He defined that as “an approach that insists on the empirical testing of theoretical generalizations and that rejects alike facts without theory and theory without facts.”
It is that approach, and the intellectual rigor that Mr. Friedman brought to it, that the Friedman Institute is meant to advocate, rather than any ideology, says Chicago economist Gary Becker, a Nobel Prize-winning former student of Mr. Friedman’s who was on the faculty committee that recommended the institute.