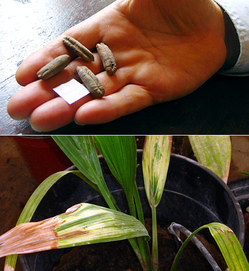 “One of a handful of 2,000-year-old seeds (top) from the fortress of Masada in present-day Israel grew into a date palm plant (bottom) called Methuselah in 2005.” Source of caption and photos: online article quoted and cited below.

The oldest-sprouted seed in the world is a 2,000-year-old plant from Jerusalem, a new study confirms.
“Methuselah,” a 4-foot-tall (1.2-meter-tall) ancestor of the modern date palm, is being grown at a protected laboratory in the Israeli capital.
In 2005 the young plant was coaxed out of a seed recovered in 1963 from Masada, a fortress in present-day Israel where Jewish zealots killed themselves to avoid capture by the Romans in A.D. 70.

(p. C6) The American Medical Association is hulking mad at Marvel Studios.
Last week, the advocacy arm of the powerful physicians’ group unleashed a tsk-tsk campaign against “The Incredible Hulk,” a Marvel film that opened on Friday and is distributed by Universal Pictures. The complaint was of “gratuitous depictions of smoking.”
In the movie, which drew a PG-13 rating from the Motion Picture Association of America, Gen. Thunderbolt Ross, a bad guy played by William Hurt, is rarely seen without a smoke-spewing cigar. (Presumably, the physicians’ association worries that children who identify with the authoritarian general — who wants to annihilate the Hulk, played by Edward Norton — may be tempted to pick up the habit.) 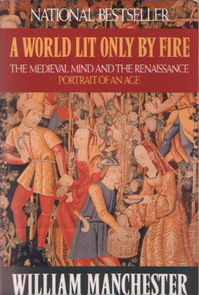 William Manchester was better known for other books, but I recommend A World Lit Only by Fire. It is not always pleasant reading, but it is often fascinating, and sometimes amusing or edifying. Unlike some historians, who are afraid to call the Dark Ages dark because they are afraid to make value judgments, Manchester details just how ‘brutish, nasty and short’ life was during the centuries from 400 AD to 1000 AD (and to a large extent even up to 1600).
He also exposes the failings of institutions and historical individuals who are now revered, including martial Popes who lived ostentatiously with funds extracted from starving peasants, and Protestant ‘reformers’ who burned books and murdered those they considered heretics.
Only a few hundred years separates us from the times that Manchester chronicles. It is useful to contemplate how far we have come, and how far we may fall, if we do not recognize and defend the values upon which civilization depends.

Reference:
Manchester, William. A World Lit Only by Fire: The Medieval Mind and the Renaissance, Portrait of an Age. Back Bay Publishers, 1993.