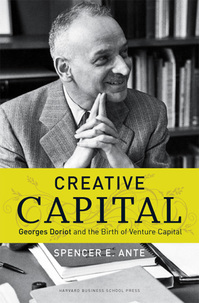 Doriot taught at Harvard during the whole time that Joseph Schumpeter taught at Harvard. Given that their interests apparently overlapped, it is surprising that there are no references to Schumpeter or to “creative destruction” in Ante’s book.
There are also no references to Doriot in McCraw’s recent comprehensive intellectual biography of Schumpeter.
(Scherer in his essay “An Accidental Schumpeterian” mentions taking a useful course from Doriot, but does not illuminate the relationship, if any, between Doriot and Schumpeter.)

(p. A17) Before Sand Hill Road near Stanford University became the center of the venture-capital universe – before Google and Pets.com – the modern market for financing risky startup companies took shape far from Silicon Valley in the years after World War II.

ARD was the first to raise what was then known as “risk capital” from outsiders at a time when investors’ wounds were still fresh from the stock-market crash of 1929 and the Depression of the 1930s. The high failure rate of start-ups had generally precluded raising money from average investors. And so ARD’s chief competitors in the postwar years were the Rockefellers and another old-money operation, J.H. Whitney & Co.
. . .
The company would hardly merit attention except for its one grand slam, Digital Equipment Corp., which helped establish the East Coast high-tech stronghold along Route 128 outside Boston.
Digital, a minicomputer maker co-founded by former Massachusetts Institute of Technology engineer Ken Olsen, received $70,000 from ARD in 1957 in return for a 70% stake, which eventually grew in value to hundreds of millions of dollars. Mr. Ante calculates the investment’s return at 70,000%.
. . .
Doriot, who taught at Harvard for 40 years, beginning in 1926, offered a popular class that was ostensibly about manufacturing but was more a seminar in his business philosophy. “He stressed common sense themes such as self-improvement, teamwork, and contributing to society,” Mr. Ante writes. Doriot was known for “spicing up his philosophy with practical and pithy words of advice.” Among them: “Always remember that someone somewhere is making a product that will make your product obsolete.”

From McCraw’s summary of Schumpeter’s History of Economic Analysis:

(p. 453) During the mid-nineteenth century, universities were beginning to teach economics, but “the demand for courses and textbooks produced courses and textbooks and not much else. Does this not show that there is something to one of the theses of this book, namely, that need is not the necessary and sufficient condition of analytic advance and that demand for teaching produces teaching and not necessarily scientific achievement?”