From McCraw’s summary of an article entitled “The Function of Entrepreneurs and the Interest of the Worker” that Schumpeter published in 1927 in a labor magazine :

(p. 384) By the end of the war, every nation in Eastern Europe and most in Central Europe had fallen under the control of the Soviets. They stripped industrial machinery, works of art, gold, and other movable assets from many of those countries and shipped them all to Russia. The total amount stolen equaled in value the aid to Western Europe under the American-sponsored Marshall Plan, the largest foreign aid program in history. 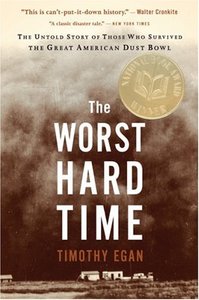 Timothy Egan’s book presents an engrossing picture of what life was like in a particular time and place in U.S. history. The time is the 1920s and 1930s, and the place is the lower “high” plains, mainly of Oklahoma and Texas. Egan is a master of telling us meaningful stories about the goals and struggles of particular people, so that we care when the land blows away from them, and they suffer.
You will need, however, to look elsewhere for a deep understanding of the causes of what happened. Egan mainly aims at describing, not explaining. And when he explains, he mainly rounds up the usual suspects one would expect a New York Times reporter to round up (e.g., Herbert Hoover).
(For deeper and more illuminating explanations of what was going on during the worst of the period, you’d do better by consulting Amity Shlaes’s The Forgotten Man.)

A few people have asked me for my views on the current financial turmoil. Below, is an email that I sent this morning (10/1/08) to my brother Eric.

Hi Eric,
I’m with Abby in the ‘stewing’ department. I’m way conflicted.
On the one hand I believe that the least government is usually the best. On the other hand, I’ve read a couple of books recently about the Great Depression, and I’d rather keep that title in the “history” folder than in the “personal experience” folder.
I’m mad about the irresponsible home loans taken on by irresponsible consumers, and encouraged by irresponsible, and sometimes dishonest, mortgage pushers, and government and quasi-governmental agencies (aka Fannie Mae and Freddie Mac).
I’m also mad at investment bankers who created totally nontransparent securities based on these mortgages, garnering huge bonuses for themselves, without creating any value for consumers.
And I’m most mad that the fallout from this will almost certainly result in more government, and more taxes, that will reduce innovation, economic progress, and freedom.
In the long-run, I think we need to get the government out of the business of encouraging, and selling mortgage loans. And investment banks need to change the incentive structure for their high flyers, to make surer that they’re rewarding good judgment, rather than rewarding opacity and unjustified risk-taking.
But the short-run gives me trouble. I have no sympathy for the investment banks. They deserve to go down.
The problem is the claim that the investment banks are an integral part of the financial infrastructure of the country. If that is true, then letting them totally fail, will take down many firms and taxpayers, who had no responsibility for the problems.
One crucial question is whether in fact, letting the investment banks fail would result in systemic collapse of the financial infrastructure. And I do not know the answer. This is a difficult question, outside my area of specialization.
But in the Great Depression, something sort of like that happened. And historians/economists have blamed Mellon/Hoover for adopting a position something akin to what the rebel house Republicans are adopting.
I have never met Ben Bernanke, and have never read any of his articles. But my impression is that he is a conscientious, serious scholar, who is generally friendly to free markets, and whose main research focus was the economics of the Great Depression. So when he looks worried, and says that something major needs to be done, I give that credibility.
I don’t like growing the government in this way. But if we don’t act, and if the collapse comes, then the proposed growth in government in the Paulson proposal will look petty ante, compared to what will follow.
I believe the government should provide national defense, police and courts. On infrastructure I’ve always been conflicted. I think a lot of infrastructure can be usefully privatized, and when it can, I favor it (although when I’m talking to Mom, I try not to mention my admiration for Mitch Daniels ;).
On the other hand I usually don’t lose much sleep about government infrastructure like the Omaha streets and FDIC insurance.
It’s a stretch, but maybe you can kind of think of what they are proposing as an emergency extension of infrastructure?
I didn’t mean to write a long message. But I couldn’t think of a good short one.
Cheers,
Art