(p. A17) Bertrand de Jouvenel, writing in 1951 about popular attitudes toward income inequality in “The Ethics of Redistribution”: 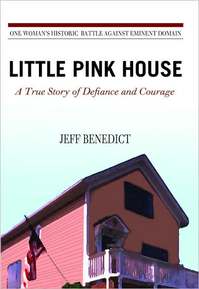 (p. A13) Roughly 70% of Americans own their own homes, a statistic that goes a long way toward explaining why the Supreme Court’s ruling in 2005 in Kelo v. City of New London was so widely reviled. Before Kelo, most Americans probably took it for granted that their home was their castle, protected by the Constitution from arbitrary seizure by government. The Fifth Amendment’s takings clause says: ” . . . nor shall private property be taken for public use, without just compensation.”

In Kelo, a majority of five justices came up with an extremely broad interpretation of “public use.” The high court’s four liberal members, joined by the ever-changeable Anthony Kennedy, ruled that government has the right to seize a private home for virtually any purpose — including handing it over to private developers.
. . .
“Little Pink House” is a modern morality tale. It shows how the politically powerful can use eminent domain as an instrument against the weak. Justice Sandra Day O’Connor said it best in her dissent in Kelo: “The fallout from this decision will not be random.” She predicted that “the government now has license to transfer property from those with fewer resources to those with more.” The beneficiaries, she wrote, are likely to be those citizens “with disproportionate influence and power in the political process.”
Owning property is one of Americans’ most basic constitutional rights. It’s too bad Susette Kelo didn’t get to exercise hers.

For the full review, see:
MELANIE KIRKPATRICK. “Bookshelf; Evicted, But Not Without a Fight; The government took her home. The Supreme Court approved.” Wall Street Journal (Mon., Jan. 26, 2009): A13.
(Note: ellipsis in first paragraph quote was in original; ellipsis between paragraphs was added.)

(p. 5) Far from being greedy, America’s leading entrepreneurs– with some unrepresentative exceptions–display discipline and self-control, hard work and austerity that excel that in any college of social work, Washington think tank, or congregation of bishops. They are a strange riffraff, to be sure, because they are chosen not according to blood, credentials, education, or services rendered to the establishment. They are chosen for performance alone, for service to the people as consumers.