(p. A15) . . . , a compassionate judge would tend to base his or her decisions on sympathy for the unfortunate; an empathetic judge on how the people directly affected by the decision would think and feel. What could be wrong with that?

Frederic Bastiat answered that question in his famous 1850 essay, “What is Seen and What is Not Seen.” There the economist and member of the French parliament pointed out that law “produces not only one effect, but a series of effects. Of these effects, the first alone is immediate; it appears simultaneously with its cause; it is seen. The other effects emerge only subsequently; they are not seen; we are fortunate if we foresee them.” Bastiat further noted that “[t]here is only one difference between a bad economist and a good one: The bad economist confines himself to the visible effect; the good economist takes into account both the effect that can be seen and those effects that must be foreseen.”
This observation is just as true for judges as it is for economists. As important as compassion and empathy are, one can have these feelings only for people that exist and that one knows about — that is, for those who are “seen.”
One can have compassion for workers who lose their jobs when a plant closes. They can be seen. One cannot have compassion for unknown persons in other industries who do not receive job offers when a compassionate government subsidizes an unprofitable plant. The potential employees not hired are unseen. 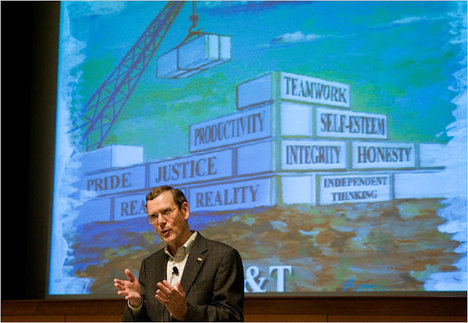 “John A. Allison IV, chairman of the banking company BB&T, is a devoted follower of Ayn Rand’s antigovernment views.” Source of photo and caption: online version of the NYT article quoted and cited below.

(p. 1) OVER much of the last four decades, John A. Allison IV built BB&T from a local bank in North Carolina into a regional powerhouse that has weathered the economic crisis far better than many of its troubled rivals — largely by avoiding financial gimmickry.

And in his spare time, Mr. Allison travels the country making speeches about his bank’s distinctive philosophy.
Speaking at a recent convention in Boston to a group of like-minded business people and students, Mr. Allison tells a story: A boy is playing in a sandbox, only to have his truck taken by another child. A fight ensues, and the boy’s mother tells him to stop being selfish and to share.
“You learned in that sandbox at some really deep level that it’s bad to be selfish,” says Mr. Allison, adding that the mother has taught a horrible lesson. “To say man is bad because he is selfish is to say it’s bad because he’s alive.”
If Mr. Allison’s speech sounds vaguely familiar, it’s because it’s based on the philosophy of Ayn Rand, who celebrated the virtues of reason, self-interest and laissez-faire capitalism while maintaining that altruism is a destructive force. In Ms. Rand’s world, nothing is more heroic — and sexy — than a hard-working businessman free to pursue his wealth. And nothing is worse than a pesky bureaucrat trying to restrict business and redistribute wealth.
Or, as Mr. Allison explained, “put balls and chains on good people, and bad things happen.”
Ms. Rand, who died in 1982, has all sorts of admirers on Wall Street, in corporate boardrooms and in the entertainment industry, including the hedge fund manager Clifford Asness, the former baseball great Cal Ripken Jr. and the Whole Foods chief executive, John Mackey.
But Mr. Allison, who remains BB&T’s chairman after retiring as chief executive in December, has emerged as perhaps the most vocal proponent of Ms. Rand’s ideas and of the dangers of government meddling in the markets. For a dedicated Randian like him, the government’s headlong rush to try to rescue and fix the economy is a horrifying re-(p. 6)alization of his worst fears.