(p. 160) My style with projects has always been to spend a lot of time getting ready to build it. Now that I saw my own computer could be a reality, I started collecting information on all the components and chips that might apply to a computer design.

I would drive to work in the morning–sometimes as early as 6:30 a.m.–and there, alone in the early morning, I would quickly read over engineering magazines and chip manuals. I’d study the specifications and timing diagrams of the chips I was interested in, like the $40 Motorola 6800 Myron had told me about. All the while, I’d be preparing the design in my head. 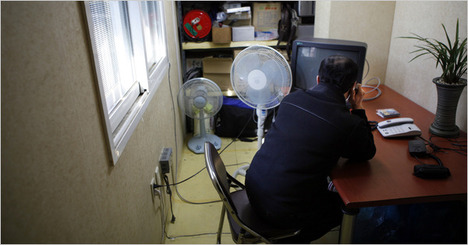 “Mun Seong-hwi, a North Korean defector, speaking to someone in North Korea to gather information at his office in Seoul.” Source of caption and photo: online version of the NYT article quoted and cited below.

I have long believed, but cannot prove, that on balance technology improves human freedom more than it endangers it.
The case of cellphones in North Korea supports my belief.

(p. A1) SEOUL, South Korea — North Korea, one of the world’s most impenetrable nations, is facing a new threat: networks of its own citizens feeding information about life there to South Korea and its Western allies.

The networks are the creation of a handful of North Korean defectors and South Korean human rights activists using cellphones to pierce North Korea’s near-total news blackout. To build the networks, recruiters slip into China to woo the few North Koreans allowed to travel there, provide cellphones to smuggle across the border, then post informers’ phoned and texted reports on Web sites.
The work is risky. Recruiters spend months identifying and coaxing potential informants, all the while evading agents from the North and the Chinese police bent on stopping their work. The North Koreans face even greater danger; exposure could lead to imprisonment — or death.

(p. A9) A National Oceanic and Atmospheric Administration scientist says he believes most of the dead turtles that have been examined since the Gulf of Mexico oil spill died not from the oil or the chemical dispersants put into the water after the disaster, but from being caught in shrimping nets, though further testing may show otherwise.

Dr. Brian Stacy, a veterinary pathologist who specializes in reptiles, said that more than half the turtles dissected so far, most of which were found shortly after the spill, had sediment in their lungs or airways, which indicated they might have been caught in nets and drowned.
“The only plausible scenario where you would have high numbers of animals forcibly submerged would be fishery interaction,” he said. “That is the primary consideration for this event.”
Many times the usual number of turtles have been found stranded this year, but NOAA has cautioned from the beginning that the oil spill is not necessarily to blame.