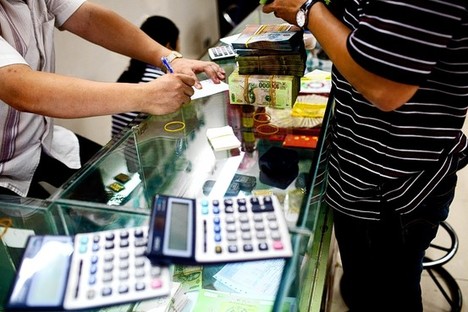 “A black-market money exchange in Hanoi trades dong for dollars.” Source of caption and photo: online version of the WSJ article quoted and cited below.

They say that for children, ‘a spoonful of sugar helps the medicine go down.’ Maybe for adults, a spoonful of irony helps the zeitgeist go down?
America lost the war in Vietnam to the Communist Vietcong. Now, the Vietnam government, consisting of the linear descendants of the Communist Vietcong, has so run their currency (the dong) into the ground, that Vietnam’s proletariat are choosing to use the American dollar instead of the Vietnamese dong.

(p. C1) HO CHI MINH CITY, Vietnam–At a time when many emerging markets are trying to stem a destabilizing rise in their local currencies against the dollar, up-and-coming Vietnam is grappling with a rather different problem: Residents can’t get enough of the U.S. greenback, as their own currency, the dong, threatens to spiral lower.
. . .
. . . the Communist-run government’s determination to hit persistently high growth targets, coupled with state-directed lending growth of more than 30% annually in recent years, have flooded Vietnam’s economy with money and created a raft of problems for the local currency. The excess capital has triggered a sharper uptick in inflation than has been seen in other emerging markets, stripping confidence in the dong as residents doubt their government can manage rising costs in the months ahead.
. . .
. . . , the government is projecting an inflation rate of at least 7% a year for the next five years, far higher than its neighbors, in a sign that it intends to pursue its target-driven, growth-at-all-costs policies.
“This isn’t a sustainable way to run an economy,” says Nguyen Quang A, an economist who ran Vietnam’s only independent economic think tank until its founders opted to close it amid tightening government censorship.

(p. 138) . . . , the Cistercians’ proven ability to produce substantial quantities of high-quality iron not only fails to prove that they were about to ignite an Industrial Revolution when they were suppressed in the early sixteenth century, it actually demonstrates the opposite–and for two reasons. First, the iron of Laskill and Fontenoy was evidence not of industrialization, but of industriousness. The Cistercians owed their factories’ efficiency to their disciplined and cheap workforce rather than any technological innovation; there’s nothing like a monastic brotherhood that labors twelve hours a day for bread and water to keep costs down. The sixteenth-century monks were still using thirteenth-century technology, and they neither embraced, nor contributed to, the Scientific Revolution of Galileo and Descartes.

The second reason is even more telling: For centuries, the Cistercian monasteries (and other ironmakers; the Cistercians were leaders of medieval iron manufacturing, but they scarcely monopolized it) had been able to supply all the high-quality iron that anyone could use, but all that iron still failed to ignite a technological revolution. Until something happened to increase demand for iron, smelters and forges, like the waterpower that drove them, sounded a lot like one hand clapping. It would sound like nothing else for–what else?–two hundred years. 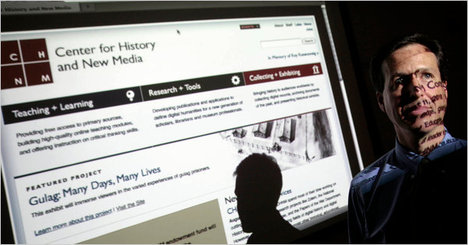 “Dan Cohen, director of the Center for History and New Media at George Mason University, is among the academics who advocate a more open, Web-based approach to reviewing scholarly works.” Source of caption and photo: online version of the NYT article quoted and cited below.

(p. A1) For professors, publishing in elite journals is an unavoidable part of university life. The grueling process of subjecting work to the up-or-down judgment of credentialed scholarly peers has been a cornerstone of academic culture since at least the mid-20th century.

. . .
“What we’re experiencing now is the most important transformation in our reading and writing tools since the invention of movable type,” said Katherine Rowe, a Renaissance specialist and media historian at Bryn Mawr College. “The way scholarly exchange is moving is radical, and we need to think about what it means for our fields.”
. . .
(p. A3) Today a small vanguard of digitally adept scholars is rethinking how knowledge is understood and judged by inviting online readers to comment on books in progress, compiling journals from blog posts and sometimes successfully petitioning their universities to grant promotions and tenure on the basis of non-peer-reviewed projects.
. . .
Each type of review has benefits and drawbacks.
The traditional method, in which independent experts evaluate a submission, often under a veil of anonymity, can take months, even years.
Clubby exclusiveness, sloppy editing and fraud have all marred peer review on occasion. Anonymity can help prevent personal bias, but it can also make reviewers less accountable; exclusiveness can help ensure quality control but can also narrow the range of feedback and participants. Open review more closely resembles Wikipedia behind the scenes, where anyone with an interest can post a comment. This open-door policy has made Wikipedia, on balance, a crucial reference resource.
Ms. Rowe said the goal is not necessarily to replace peer review but to use other, more open methods as well.
In some respects scientists and economists who have created online repositories for unpublished working papers, like repec.org, have more quickly adapted to digital life. Just this month, mathematicians used blogs and wikis to evaluate a supposed mathematical proof in the space of a week — the scholarly equivalent of warp speed.