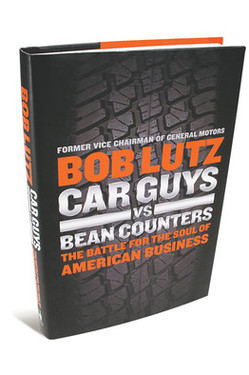 (p. B1) . . . , General Motors embarked on a series of initiatives to overcome both the perception and reality of the growing import threat. The 1950s and ’60s marked the decline of the “product guy” at GM and the ascendancy of “professional management,” often individuals with a strong financial background.

It’s not that senior GM management disliked cars. It was more an atmosphere of “benign neglect,” a generalized consensus that we were, after all, primarily in the business of making money, and cars were merely a transitory form of money: put a certain quantity in at the front end, transform it into vehicles, and sell them for more money at the other (p. B12) end. The company cared about “the other two ends”–minimizing cost and maximizing revenue–but assumed that customer desire for the product was a given.
Responsibility for creation of the right product was delegated to lower levels in the organization, often to people with little understanding of quality design or great driving characteristics. I maintain that without a passionate focus on great products from the top of the company on down, the “low cost” part will be assured but the “high revenue” part won’t happen, just as it didn’t at GM for so many years.

The excerpt is excerpted from:
Lutz, Bob. Car Guys Vs. Bean Counters: The Battle for the Soul of American Business. New York: Portfolio, 2011.

(p. 67) . . . : The Nature of Bread, Honestly and Dishonestly Made, by Joseph Manning, M.D., . . . reported that it was common for bakers to add bean meal, chalk, white lead, slaked lime, and bone ash to every loaf they made.

These assertions are routinely reported as fact, even though it was demonstrated pretty conclusively over seventy years ago by Frederick A. Filby, in his classic work Food Adulteration (1934), that the claims could not possibly be true. Filby took the interesting and obvious step of baking loaves of bread using the accused adulterants in the manner and proportions described. In every case but one the bread was either as hard as (p. 68) concrete or failed to set at all, and nearly all the loaves smelled or tasted disgusting. Several needed more baking time than conventional loaves and so were actually more expensive to produce. Not one of the adulterated loaves was edible.

Mr. Nader isn’t calling for a router recall or claiming the company’s networks are unsafe at any speed. Instead, he wants the tech company to pay a bigger dividend to boost its shares.
The consumer advocate’s motives are far from altruistic. He is a longtime disgruntled Cisco investor who called the company’s share performance “appalling.” In a private letter to Cisco Chief Executive John Chambers sent June 13, Mr. Nader blasted the CEO for not doing enough to lift shares of the technology company and said “it is time for a long overdue Cisco shareholder revolt against a management that is oblivious to building or even maintaining shareholder value,” according to the letter.
. . .
The 77-year-old Mr. Nader, who rose to fame in the 1960s on his claims that American automobiles were unsafe, admitted the letter is a departure from his typical antibusiness stance. He said he has been an “adversary of corporate capitalism,” but he is a believer in capitalism, so long as shareholders have a voice. He wrote the letter to Mr. Chambers, he said, because he objects to the “powerlessness of owner shareholders.”