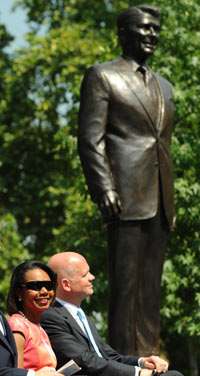 The McCarthy mentioned in the passage quoted below is a California representative who also serves as majority whip.

(p. A9) The statue of a smiling Reagan, dressed in a crisp suit, was paid for by the Ronald Reagan Presidential Foundation as part of a worldwide effort to promote his legacy, according to the organization’s executive director.
. . .
Though Mrs. Thatcher is in poor health and did not attend, she provided a statement that was read by Mr. Hague. “Through his strength and conviction,” she wrote, “he brought millions of people to freedom as the Iron Curtain finally came down.”
In a speech, Mr. McCarthy described Mr. Reagan’s fight not only against the forces of Communism, but against the “tyranny” of debt and big government. He and Mrs. Thatcher, he said, “did not move to the center to gather votes, they moved the center to them.”

For the full story, see:
RAVI SOMAIYA. “Finding a New Perch, Americana Takes a Stand in London.” The New York Times (Tues., July 5, 2011): A9.
(Note: ellipsis added.)
(Note: the online version of the article is dated July 4, 2011 and has the title “Statue of Reagan Is Unveiled in London.”)