(p. 237) If we apply the ubiquity test–what happens if everyone does it?–to the Amish way, the optimization of choice collapses. By constraining the suite of acceptable occupations and narrowing education, the Amish are holding back possibilities not just for their children but indirectly for all.
If you are a web designer today, it is only because many tens of thousands of other people around you and before you have been expanding the realm of possibilities. They have gone beyond farms and home shops to invent a complex ecology of electronic devices that require new expertise and new ways of thinking. If you are an accountant, untold numbers of creative people in the past devised the logic and tools of accounting for you. If you do science, your instruments and field of study have been created by others. If you are a photographer, or an extreme sports athlete, or a baker, or an auto mechanic, or a nurse–then your potential has been given an opportunity by the work of others. You are being expanded as others expand themselves.
. . .
. . . as you embrace new technologies, you are indirectly working for future generations of Amish, and for the minimite homesteaders, even though they are not doing as much for you. Most of what you adopt they will ignore. But every once in a while your adoption of “something that doesn’t quite work yet” (Danny Hillis’s definition of technology) will evolve into an appropriate tool they can use. It might be a solar grain dyer; it might be a cure for cancer. 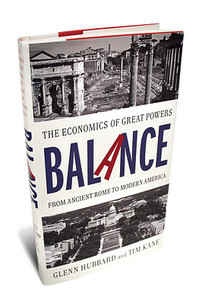 (p. A11) Messrs. Hubbard and Kane argue, as do others, that certain policies and core principles are the key: property rights, flexible work rules, open markets. For the authors, such matters explain economic growth entirely.

To those who would cite the primacy of technological breakthroughs, Messrs. Hubbard and Kane assert that inventions only spark growth if there are systems in place (such as intellectual-property rights) that enable inventions to flourish and their value to spread. “The wheel and the windmill were invented many times,” they write, “then forgotten, until finally one society had the institutional framework to implement them widely and pass them on permanently.” In short, “institutions explain innovation.”

For the full review, see:
Matthew Rees. “BOOKSHELF; How the Mighty Fall; The Roman empire eventually lost its economic vitality thanks to price controls, heavy taxes and state-sponsored debt relief.” The Wall Street Journal (Fri., June 21, 2013): A11.
(Note: ellipses added.)
(Note: the online version of the review has the date June 20, 2013.)

The book under review, is:
Hubbard, Glenn, and Tim Kane. Balance: The Economics of Great Powers from Ancient Rome to Modern America. New York: Simon & Schuster, 2013.

(p. D1) Since 1896, scientists have been trying to answer a deceptively simple question: What will happen to the temperature of the earth if the amount of carbon dioxide in the atmosphere doubles?
Some recent scientific papers have made a splash by claiming that the answer might not be as bad as previously feared. This work — if it holds up — offers the tantalizing possibility that climate change might be slow and limited enough that human society could adapt to it without major trauma.
. . .
In 1979, after two decades of meticulous measurements had made it clear that the carbon dioxide level was indeed rising, scientists used computers and a much deeper understanding of the climate to calculate a likely range of warming. They found that the response to a doubling of carbon dioxide would not be much below three degrees Fahrenheit, nor was it likely to exceed eight degrees.
In the years since, scientists have been (p. D6) pushing and pulling within that range, trying to settle on a most likely value. Most of those who are expert in climatology subscribe to a best-estimate figure of just over five degrees Fahrenheit.
. . .
What’s new is that several recent papers have offered best estimates for climate sensitivity that are below four degrees Fahrenheit, rather than the previous best estimate of just above five degrees, and they have also suggested that the highest estimates are pretty implausible.
Notice that these recent calculations fall well within the long-accepted range — just on the lower end of it.