(p. 1D) Even the oldest and most established companies were once a back-of-the-envelope glimmer of an idea.
That was the message Wednesday night from First National Bank’s Clark Lauritzen, president of the company’s FNN Wealth Management.
. . .
TD Ameritrade founder Joe Ricketts, Lauritzen said, started his company in 1975 with a First National loan secured by his car and house; the first office was in the bank’s basement. Now, the online stock brokerage employs 2,000 people in Omaha and is an industry leader.
“Joe reinvested his profits in the business year after year,” Lauritzen said. 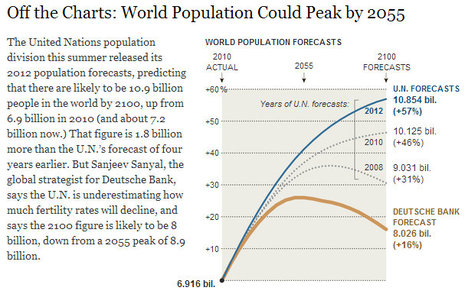 (p. B3) An analysis of population trends by Sanjeev Sanyal, the global strategist for Deutsche Bank, concludes that population growth is likely to be much slower than the U.N.’s estimate.

“In our view, global fertility will fall to the replacement rate in less than 15 years,” Mr. Sanyal wrote. “Population may keep growing for a few more decades from rising longevity but, reproductively speaking, our species will no longer be expanding.” He forecasts that world population will peak in around 2055, at 8.7 billion, and decline to 8 billion by the end of the century.
The fertility replacement rate — the number of children per woman needed to keep the population level over time — is usually considered to be 2.1. Mr. Sanyal says that in the developing world, it is higher, because of higher infant mortality and maternal death in childbirth. For the world as a whole, he thinks the current replacement rate is about 2.27, a figure that will come down gradually over time.
The spread between the latest U.N. forecast and Deutsche Bank’s for 2100 — 2.8 billion people — is greater than the entire population of the world in 1955.

(p. 150) . . . , the Securities and Exchange Commission was unimpressed by the charms of Page’s “Owner’s Manual.” “Please revise or delete the statements about providing ‘a great service to the world,’ ‘to do things that matter,’ ‘greater positive impact on the world, don’t be evil’ and ‘making the world a better place,'” they wrote. (Google would not revise the letter.) The commission also had a problem with Page’s description of the lawsuit that Overture (by then owned by Yahoo) had filed against Google as “without merit.” Eventually, to resolve this issue before the IPO date, (p. 151) Google would settle the lawsuit by paying Yahoo 2.7 million shares, at an estimated value of between $ 260 and $ 290 million.
That set a contentious tone that ran through the entire process. The SEC cited Google’s irregularities on a frequent basis, whether it was a failure to properly register employee stock options, inadequate reporting of financial results to stakeholders, or the use of only first names of employees in official documents. It acted toward Google like a junior high school vice principal who’d identified an unruly kid as a bad seed, requiring constant detentions.