(p. B1) SAN FRANCISCO — Shortly after Twitter’s board of directors began its search for a new chief executive in June [2015], it said it would only accept someone willing to commit to the job full time. It was a not-so-subtle message to Twitter’s co-founder and interim boss, Jack Dorsey, that he would have to give up his job running Square, a mobile payments start-up, if he wanted to run Twitter on a permanent basis.
On Monday [Oct. 5, 2015], the eight-member board reversed itself, announcing that it had decided to allow Mr. Dorsey, its chairman, to head both companies after all.
. . .
(p. B8) This is Mr. Dorsey’s second go-round as Twitter’s chief executive.
Evan Williams, a board member and co-founder of Twitter who was instrumental in firing him in 2008, noted that the board considered many candidates before settling on Mr. Dorsey.
“I honestly didn’t think we’d land on Jack when we started unless he could step away from Square,” Mr. Williams wrote in a post on Medium, the social media site he now runs. “But ultimately, we decided it was worth it.”
In the end, Mr. Dorsey made a compelling case that he had matured and grown as a leader and that only a founder would have the moral authority to truly shake up a company that has been struggling to attract new users and compete for advertising dollars.

On Sat., Jan. 17, 2016 I caught the re-broadcast of an interview with Mei Fong that C-SPAN’s web site suggests was first broadcast on Jan. 11, 2016. The interview focused on Fong’s book on the history, causes and effects of China’s one child laws. Fong is understated in her style, but it is clear that the Chinese communist government violated the rights of many Chinese citizens by forcing them to have unwanted abortions, and to undergo unwanted sterilizations. In many cases, when their “one child” died in a disaster, or of natural causes, parents desperately rushed to try to have the forced sterilization reversed.

Fong’s book, that she discussed on C-SPAN, is:
Fong, Mei. One Child: The Story of China’s Most Radical Experiment. Boston, MA: Houghton Mifflin Harcourt, 2016.

(p. B3) PARIS — Angry workers stormed Air France headquarters on Monday [October 5, 2016] as top managers were meeting to discuss plans to shed more than 2,900 jobs, forcing two executives to flee over a fence and in the process ripping the shirts from their backs.
The violence at the Air France offices near Charles de Gaulle Airport broke out shortly after 9:30 a.m. Officials, including the chief executive officer, Frédéric Gagey, had informed the company’s workers council that 900 flight attendants, 1,700 ground crew members and 300 pilots could be laid off as the airline strives to return to profitability.
The talks at the company, which is facing headwinds from an economic downturn and competition from low-cost carriers, had been tense for more than a year. While violence had not marred previous negotiations, the protests Monday were the latest in a series of incidents in France in which workers have held company bosses hostage or damaged property to make their point.
As the Air France executives detailed the latest restructuring plan, union activists swarmed into the room, waving flags and chanting protests, prompting Mr. Gagey to make a hasty exit. 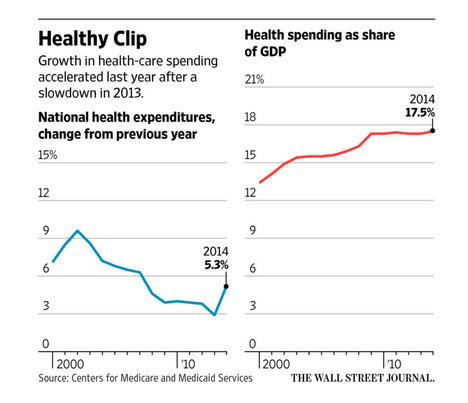 (p. A3) WASHINGTON–Growth in U.S. health-care spending is accelerating after reaching historic lows, a pickup largely attributed to the millions of Americans who have gotten health coverage under the Affordable Care Act.

Spending on all health care increased 5.3% in 2014, according to a report Wednesday [Dec. 2, 2015] from actuaries at the Centers for Medicare and Medicaid Services. That compares with the 2.9% growth in 2013, which marked the lowest rate since the government began tracking the gains 55 years ago.
The return to more robust growth after a slowdown in spending had been anticipated by economists. Still, it is likely to add to criticism that the 2010 health law isn’t doing enough to rein in costs. The report, based on 2014 government numbers and published in the journal Health Affairs, follows five consecutive years where average spending growth was less than 4% annually.

(p. A3) The Food and Drug Administration and leading cardiologists are warning that aortic heart valves from animal tissue–implanted surgically in thousands of patients world-wide–can develop tiny blood clots, causing the valves to function improperly.
The findings hit the field of cardiology as something of a shock, as these valves from pig and cow tissue have been used for three decades in patients with malfunctioning valves. In addition, the tissue valves have been regarded as less likely to produce blood clots than mechanical valves made of synthetic materials.
. . .
Cardiologist Eric Topol, chief academic officer at Scripps Health in San Diego, called it “remarkable” that such a finding could emerge after three decades of use of the animal-tissue valves. The idea that they lead to less clotting, he said, was “accepted dogma that wasn’t looked at.”

Eric Topol, quoted above, has written persuasively for more medical innovation, in his:
Topol, Eric. The Creative Destruction of Medicine: How the Digital Revolution Will Create Better Health Care. New York: Basic Books, 2012.

C-SPAN on Sat., Jan. 17, 2016 broadcast a thought-provoking presentation by Courtney Jung on her book Lactivism. Jung argues that an unusual array of groups strongly advocate breast-feeding for reasons that are independent of the fairly modest health benefits, for baby and mother, that result from breast-feeding.

Jung’s book, that she discussed on C-SPAN, is:
Jung, Courtney. Lactivism: How Feminists and Fundamentalists, Hippies and Yuppies, and Physicians and Politicians Made Breastfeeding Big Business and Bad Policy. New York: Basic Books, 2015.

(p. B2) Biotechnology startup Spark Therapeutics Inc. said its experimental gene therapy improved vision among patients with hereditary vision impairment in a clinical trial, without the serious safety problems that have dogged the emerging field of gene therapy in the past.
. . .
Spark said it plans to seek U.S. Food and Drug Administration approval to market its treatment next year, which could make it the first gene therapy to reach the U.S. market if regulators approve it for sale. . . .
Gene therapy involves the injection of genetic material into a person’s cells to treat or prevent a disease. The research stalled after some study participants died or developed cancer after receiving gene therapies in the late 1990s and 2000s.
But gene therapy is gaining ground again. In 2012, the European Commission approved the Western world’s first gene therapy, UniQure NV’s Glybera, for the treatment of patients with a rare enzyme deficiency. The therapy hasn’t been approved for sale in the U.S.