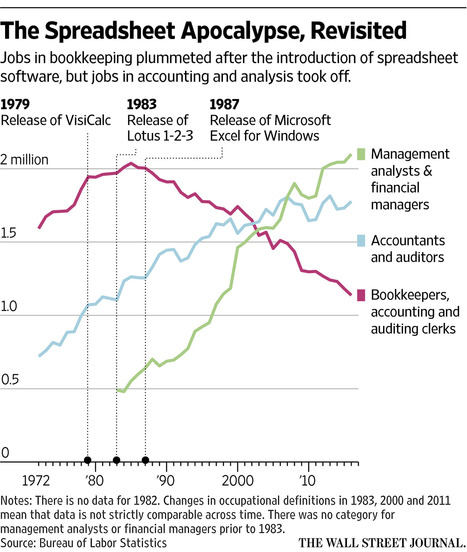 (p. A2) Whether truck drivers or marketing executives, all workers consider intelligence intrinsic to how they do their jobs. No wonder the rise of “artificial intelligence” is uniquely terrifying. From Stephen Hawking to Elon Musk, we are told almost daily our jobs will soon be done more cheaply by AI.
. . .
Until the 1980s, manipulating large quantities of data–for example, calculating how higher interest rates changed a company’s future profits–was time-consuming and error-prone. Then along came personal computers and spreadsheet programs VisiCalc in 1979, Lotus 1-2-3 in 1983 and Microsoft Excel a few years later. Suddenly, you could change one number–say, this year’s rent–and instantly recalculate costs, revenues and profits years into the future. This simplified routine bookkeeping while making many tasks possible, such as modeling alternate scenarios.
. . .
The new technology pummeled demand for bookkeepers: their ranks have shrunk 44% from two million in 1985, according to the Bureau of Labor Statistics. Yet people who could run numbers on the new software became hot commodities. Since 1985, the ranks of accountants and auditors have grown 41%, to 1.8 million, while financial managers and management analysts, which the BLS didn’t even track before 1983, have nearly quadrupled to 2.1 million.

(p. A21) If you read Google’s public statement about Google Duplex, you’ll discover that the initial scope of the project is surprisingly limited. It encompasses just three tasks: helping users “make restaurant reservations, schedule hair salon appointments, and get holiday hours.”
Schedule hair salon appointments? The dream of artificial intelligence was supposed to be grander than this — to help revolutionize medicine, say, or to produce trustworthy robot helpers for the home.
The reason Google Duplex is so narrow in scope isn’t that it represents a small but important first step toward such goals. The reason is that the field of A.I. doesn’t yet have a clue how to do any better.
. . .
The narrower the scope of a conversation, the easier it is to have. If your interlocutor is more or less following a script, it is not hard to build a computer program that, with the help of simple phrase-book-like templates, can recognize a few variations on a theme. (“What time does your establishment close?” “I would like a reservation for four people at 7 p.m.”) But mastering a Berlitz phrase book doesn’t make you a fluent speaker of a foreign language. Sooner or later the non sequiturs start flowing.
. . .
To be fair, Google Duplex doesn’t literally use phrase-book-like templates. It uses “machine learning” techniques to extract a range of possible phrases drawn from an enormous data set of recordings of human conversations. But the basic problem remains the same: No matter how much data you have and how many patterns you discern, your data will never match the creativity of human beings or the fluidity of the real world. The universe of possible sentences is too complex. There is no end to the variety of life — or to the ways in which we can talk about that variety.
. . .
Today’s dominant approach to A.I. has not worked out. Yes, some remarkable applications have been built from it, including Google Translate and Google Duplex. But the limitations of these applications as a form of intelligence should be a wake-up call. If machine learning and big data can’t get us any further than a restaurant reservation, even in the hands of the world’s most capable A.I. company, it is time to reconsider that strategy.