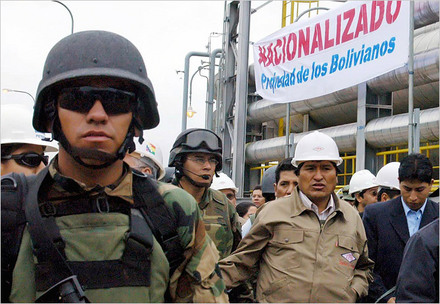 Bolivia’s nationalization of its energy industry, announced Monday by President Evo Morales, was a vivid illustration that the populist policies, championed most prominently by Venezuela, were spreading.

. . .  while Brazil might feel tremors from Bolivia’s decision, it is Bolivia that may be risking its potential as a major natural gas exporter.

Companies had been holding off on investments in Bolivia for some time, unnerved by growing talk of precisely the kind of step that Mr. Morales took this week.  Foreign direct investment, much of which goes to energy and mining, fell to $103 million in 2005, from $1 billion in 1999.

What is more, unlike oil, natural gas is not easily exportable, with costly liquefaction facilities, customized tankers or pipelines needed to take the fuel to markets.  Chile, a potential market for Bolivian gas, may choose instead a project to import the fuel from as far away as Africa.

Even Brazil, while now reliant on Bolivian gas, has recently discovered large offshore gas reserves of its own.  Thus the window of opportunity for Bolivia to become a leading gas exporter may be closing, even as it grows more courageous in its dealings with foreigners.

"If Brazil decides to give the cold shoulder to Bolivia," said Carlos Alberto López, an independent consultant for oil companies in La Paz, "Bolivia will be left with its gas underground." 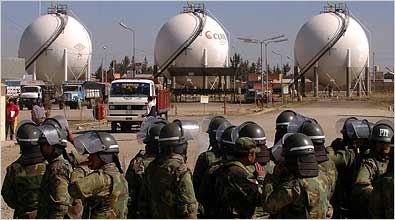 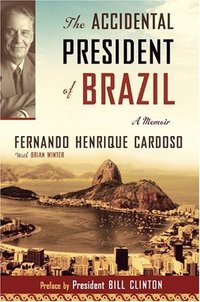 Fernando Cardosa is the former Brazilian President who is best known for having temporarily tamed Brazil’s runaway inflation.  Although not a principled believer in the free market, Cardoso made some efforts to reduce the damage the Brazilian government was doing to the economy.  The following startling passage is from a useful review of a new memoir by Cardoso:

. . . ,  Mr. Cardoso mentions a telling moment at a 1999 summit meeting in Havana.  When the heads of state were alone at a luncheon, one said to Castro:  "Damn it Fidel!  What are you going to do about this lousy, piece-of-**** island of yours?   We’re sick of apologizing for you all the time, Fidel.  It’s getting embarrassing."   The anecdote shows how disingenuous Latin governments can be when they remain silent about the Cuban dictatorship.

Here is the full reference to Cardoso’s memoir:

(p. 85) ". . . in March 1911 Nebraskan Representative George W. Norris sponsored a congressional resolution asking the Attorney General to investigate "a monopoly in the coffee industry."  Wickersham replied that he indeed was conducting an ongoing investigation.

(p. 86) In April, Norris lambasted the coffee trust from the floor of the House, summarizing the valorization loan process.  He concluded that "this gigantic combination [has been able] to control the supply and the sale of coffee throughout the civilized world.  [They] sold only in such quantities as would not break the market."  Frustrated by Brazil’s involvement, he observed that when a conspiracy to monopolize a product involved a domestic corporation, it was termed a trust and could be broken.  "But if the combination has behind it the power and influence of a great nation, it is dignified with the new term ‘valorization.’  Reduced to common language, it is simply a hold-up of the people by a combination."