In his comprehensive history of coffee, Mark Pendergrast discusses efforts of the coffee-producing nations to raise the price of coffee in 1977:

(p. 332) Quota restrictions without consumer country participation never worked in the past, since someone always cheated.

(p. 263) In the middle of this fierce competition, with its low quality standards and apparent market saturation, a New York nut vendor and restaurateur proved that a new brand stressing quality could triumph.

By August 1954, less than a year after its debut, Chock full o’ Nuts had grabbed third place among vacuum-packed coffees in New York City.

We tend to romanticize the country store, and to deride chain stores and name brands. But maybe coffee lovers should think twice.

(p. 116, footnote 1) "The air was thick with an all-embracing odor," wrote Gerald Carson in The Old Country Store, "an aroma composed of dry herbs and wet dogs, [of] strong tobacco, green hides and raw humanity."  Bulk roasted coffee absorbed all such smells.

(Note: the “of” in brackets in the Carson quote is the word Carson used in his book; Pendergrast mistakenly substitutes the word “or”; I have corrected Pendergrast’s mistake.) 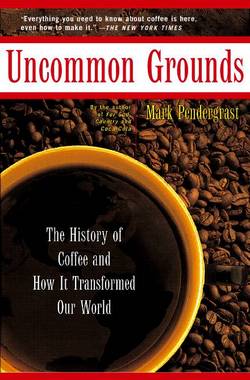 The source for the image of the book is: http://nasw.org/users/markp/grounds.html

But even on the endowment theory’s own terms, it would seem that an initial comparative advantage can be squandered. Consider Ethiopia, which is the country in which coffee beans were first discovered, many centuries ago.

(p. 153) . . . Ethiopia, the birthplace of coffee, now exported a negligible amount of the bean, largely due to graft and corruption extending from King Menelik down to the country’s customs agents, . . .

The quotation is from:

(p. 85) ". . . in March 1911 Nebraskan Representative George W. Norris sponsored a congressional resolution asking the Attorney General to investigate "a monopoly in the coffee industry."  Wickersham replied that he indeed was conducting an ongoing investigation.

(p. 86) In April, Norris lambasted the coffee trust from the floor of the House, summarizing the valorization loan process.  He concluded that "this gigantic combination [has been able] to control the supply and the sale of coffee throughout the civilized world.  [They] sold only in such quantities as would not break the market."  Frustrated by Brazil’s involvement, he observed that when a conspiracy to monopolize a product involved a domestic corporation, it was termed a trust and could be broken.  "But if the combination has behind it the power and influence of a great nation, it is dignified with the new term ‘valorization.’  Reduced to common language, it is simply a hold-up of the people by a combination."