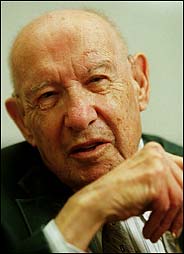 1999 photo of Drucker from NYT online article cited below.

Peter F. Drucker, the political economist and author, whose view that big business and nonprofit enterprises were the defining innovation of the 20th century led him to pioneering social and management theories, died yesterday at his home in Claremont, Calif. He was 95.

Peter Drucker is sometimes given credit for helping keep the ideas of Schumpeter alive, and helping spur their revival in the 1980s. See Drucker’s article:
Drucker, Peter F. “Modern Prophets: Schumpeter or Keynes?” Reprinted as Ch. 12 in The Frontiers of Management. New York: Penguin Putnam, Inc., 1986, pp. 104-115 (originally published as: “Schumpeter and Keynes.” Forbes (May 23, 1983): 124-128). 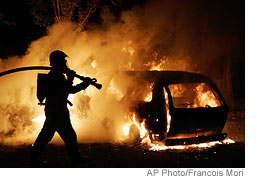 Source of photo: WSJ online version of article quoted and cited below.

The French rioters face very high unemployment. French restrictions on the labor market, and the economy more generally, cause the high unemployment. For example, the French make it hard for firms to fire employees, so as a result, firms are more reluctant to hire workers in the first place, resulting in higher unemployment. Although they do not know it, the rioters are rioting because France is closed to creative destruction. The following commentary is on point:

(p. A16) Like other Americans, immigrants often dramatically improve their quality of life and economic prospects by moving out to less dense, faster growing areas. They can also take advantage of more business-friendly government. Perhaps the most extreme case is Houston, a low-cost, low-tax haven where immigrant entrepreneurship has exploded in recent decades. Much of this has taken place in the city itself. Looser regulations and a lack of zoning lower land and rental costs, providing opportunities to build businesses and acquire property.

It is almost inconceivable to see such flowerings of ethnic entrepreneurship in Continental Europe. Economic and regulatory policy plays a central role in stifling enterprise. Heavy-handed central planning tends to make property markets expensive and difficult to penetrate. Add to this an overall regulatory regime that makes it hard for small business to start or expand, and you have a recipe for economic stagnation and social turmoil. What would help France most now would be to stimulate economic growth and lessen onerous regulation. Most critically, this would also open up entrepreneurial and employment opportunity for those now suffering more of a nightmare of closed options than anything resembling a European dream.

For the full commentary, see:
Joel Kotkin. “Our Immigrants, Their Immigrants.” The Wall Street Journal (November 8, 2005): A16.

Perhaps these observations are relevant to the claim by what I call the “left Schumpeterians” (e.g., Tom Friedman) that a substantial labor safety net is necessary for creative destruction to work.

(p. 271) In Warsaw, from 1978 onward, he had directed what became known as “the Balcerowicz group,” a long-running study group that was devoted to analyzing the “problems” of socialism and the question of how to reform the Polish economy. It focused on such basic questions as property rights, the proper role of the state in the economy, inflation, and what was increasingly becoming the true hallmark of socialism-shortages. All of this convinced Balcerowicz that “gradualism” was doomed to failure. Unless enough changes were combined and applied rapidly, the necessary “critical mass” would not be reached. Unlike many economists, he also dabbled in social psychology. He was particularly impressed by the theory of cognitive dissonance. As Balcerowicz summed up its significance for economic reform: “People are more likely to change their attitudes and their behavior if they are faced with radical changes in their environment, which they consider irreversible, than if those changes are only gradual.”


Source:
Yergin, Daniel, and Joseph Stanislaw. The Commanding Heights: The Battle Between Government and the Marketplace that is Remaking the Modern World.. New York: Simon & Schuster, 1998.

(Source: downloaded graphic from online version of WSJ see below, p. A13)

Booz Allen Hamilton Inc., a consulting firm, analyzed six years of financial results by 1,000 publicly traded companies responsible for the bulk of R&D spending globally. The firm found the companies that spent proportionately greater sums than their industry peers didn’t enjoy greater revenue gains or better profits.
The finding flies in the face of academic studies and accepted wisdom on the value of corporate research. It also comes as researchers warn that U.S. companies need to increase spending or risk falling behind rivals in China and India, which are rapidly industrializing.
Booz Allen concluded that once a minimum level of research and development spending is achieved, better oversight and culture were more significant factors in determining financial results. The study calculated the percentage of a company’s revenue spent on R&D and compared it with sales growth, gross profit, operating profit, market capitalization and total shareholder result.

McWilliams, Gary. “In R&D, Brains Beat Spending In Boosting Profit.” The Wall Street Journal
(Weds., October 11, 2005): A2 & A13.
Ah, so maybe the entrepreneur or R&D manager, can make a difference after all? (This is not a surprise, if you believe, as I do, that Clayton Christensen is on to something important.) Or, though less interesting, the results might just be due to diminishing returns to R&D.

This morning, Alan Greenspan delivered an excellent speech on “Economic Flexibility” at Georgetown before the National Italian American Foundation, Washington, D.C. Here is the part of the speech most directly relevant to the process of creative destruction:

Starting in the 1970s, U.S. Presidents, supported by bipartisan majorities in the Congress, responded to the growing recognition of the distortions created by regulation, by deregulating large segments of the transportation, communications, energy, and financial services industries. The stated purpose of this deregulation was to enhance competition, which had come to be seen as a significant spur to productivity growth and elevated standards of living. Assisting in the dismantling of economic restraints was the persistent, albeit slow, lowering of barriers to cross-border trade and finance.
As a consequence, the United States, then widely seen as a once-great economic power that had lost its way, gradually moved back to the forefront of what Joseph Schumpeter, the renowned Harvard professor, had called “creative destruction”–the continual scrapping of old technologies to make way for the innovative. In that paradigm, standards of living rise because depreciation and other cash flows of industries employing older, increasingly obsolescent technologies are marshaled, along with new savings, to finance the production of capital assets that almost always embody cutting-edge technologies. Workers, of necessity, migrate with the capital.
Through this process, wealth is created, incremental step by incremental step, as high levels of productivity associated with innovative technologies displace less-efficient productive capacity. The model presupposes the continuous churning of a flexible competitive economy in which the new displaces the old.
As the 1980s progressed, the success of that strategy confirmed the earlier views that a loosening of regulatory restraint on business would improve the flexibility of our economy. No specific program encompassed and coordinated initiatives to enhance flexibility, but there was a growing recognition that a market economy could best withstand and recover from shocks when provided maximum flexibility.

The full speech is available at the Federal Reserve web site at: http://www.federalreserve.gov/boarddocs/speeches/2005/20051012/default.htm

Speaking of the invention of a practical, affordable sewing machine:

It was a democratizing influence. James Parton was exaggerating only a little when he wrote in the Atlantic Monthly in 1867 that it was “one of the means by which the industrious laborer is as well clad as any millionaire.” (p. 84)

Thomas Friedman’s claim here is plausible, but I find it surprising, given his strong push for a worker safety net when the worker loses a job to creative destruction. The safety net Friedman proposes, in this book anyway, is one that does incorporate some incentives to find a job, but sounds like it could be ‘gamed’ to delay the tough decisions that might need to be made. Hayek had some useful observations on this issue way back in his Road to Serfdom.