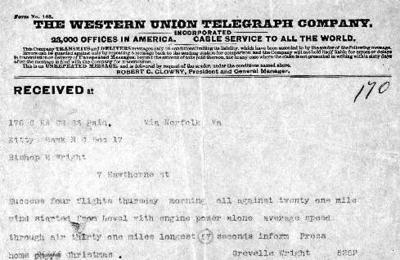 A telegram. Source of image: online version of article cited below.

BLOOMBERG NEWS
After 155 years in the telegraph business, Western Union has cabled its final dispatch.
The service that in the mid-1800s displaced pony-borne messengers has itself been supplanted over the last half-century by cheap long-distance telephone service, faxes and e-mail.
In a final bit of irony, Western Union informed customers last week in a message on its Web site. 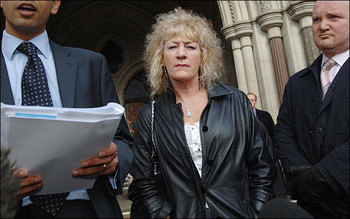 (p. A6) LONDON, Feb. 15 — When her local health service refused to treat her breast cancer with the drug Herceptin, 54-year-old Ann Marie Rogers sued. But on Wednesday, a High Court judge ruled against her.
In his decision the judge, David Bean, said that although he sympathized with Ms. Rogers’s predicament, the health service in Swindon, where she lives, had been justified in withholding the drug.
“The question for me is whether Swindon’s policy is irrational and thus unlawful,” Justice Bean wrote. “I cannot say it is.”
The ruling has potentially serious implications for patients across the taxpayer-financed National Health Service.
Despite health officials’ contention that decisions about treatment are based solely on clinical effectiveness, critics contend that with drugs growing ever more expensive, cost has become an increasingly important factor. They also say patients are at the mercy of the so-called postcode lottery, in which treatments are available in some postal zones but not others.

Is it the free market, or big government, that is most likely to treat individual human beings as expendible “dots”?

One of the best conspiracy movies ever made is the perfect British classic, “The Third Man.” In the most haunting scene, the villain, played adroitly by Orson Welles, takes Joseph Cotten, the good guy, up in a Ferris wheel. The villain, named Harry Lime, has been selling adulterated penicillin in postwar Vienna, making a fortune and causing children to become paralyzed and die.
Mr. Cotten’s character, a pulp fiction writer named Holly Martins, asks him how he could do such an evil thing for money. The two men are at the top of the Ferris wheel, and the people below them look like tiny dots. Mr. Welles’s villain looks down and says, “Tell me, would you really feel any pity if one of those dots stopped moving forever? If I offered you £20,000 for every dot that stopped, would you really, old man, tell me to keep my money, or would you calculate how many dots you could afford to spare?” 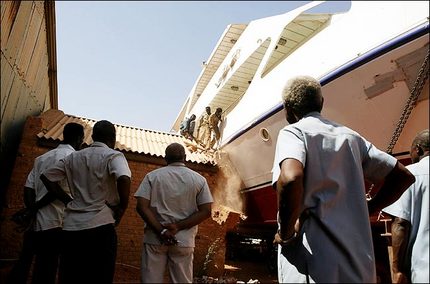 Source of photo: online version of the NYT article cited below.

KHARTOUM, Sudan, Jan. 30 — Sudan’s government pulled out all the stops for the heads of state who swept into town for the African Union summit conference last week. Streets were scrubbed and welcome signs erected. Elegant new villas, outfitted with fancy linen and china, were put up along the Nile.

And then there was the fancy presidential yacht that was supposed to ferry the dignitaries up and down the river for evening soirees. Much like Sudan’s hopes of assuming the chairmanship of the African Union at the conference, though, the boat never materialized.
Even after the presidents had come and gone, the yacht was nowhere to be found. It was not on the White Nile, which flows northward from Lake Victoria. Nor was it on the Blue Nile, which swoops into Khartoum from Ethiopia.
But Ibrahim Khalfalla never lost sight of the hulking craft, which has two decks and is 118 feet long and 32 feet wide. He was the man charged with getting the boat from Slovenia, where it was built for an estimated $4.5 million, to Sudan, where President Omar Hassan al-Bashir planned to inaugurate it. And although he missed his deadline, Mr. Khalfalla said he did the best he could under the circumstances.
“This is difficult, so difficult,” he said, as the huge tractor-trailer that had been carrying the boat from Port Sudan to Khartoum by road inched close to its destination the other day. “You don’t know how difficult.”
It was actually rather easy to see how challenging a job this was. Even with the boat a mere 200 feet from the water’s edge, serious obstacles remained, like the building that the precious cargo struck while Mr. Khalfalla motioned wildly at the man behind the wheel of the truck.
As the yacht scraped against a brick wall, onlookers let out a groan. Soon workers were atop the boat, prying away bricks.
. . .
But even before the craft hit the water, it was taking on criticism from those who viewed it as an extravagant symbol of just how far removed the government is from the people.
Disparaged in newspapers as “Bashir’s boat” and a “million-dollar toy,” the craft, with its sophisticated satellite technology, elaborate presidential suite and dining facilities for 76 guests, left critics unimpressed.
The Juba Post, saying the government had “missed the boat,” called on officials to donate it to the Red Cross as a floating hospital ship. “Children scrounge for food in Khartoum North,” the paper said, not far from “the president’s expensive shipwreck.”
Another newspaper, The Khartoum Monitor, lamented that the government was using barges to take people displaced from the long war in the south back to their homes while the government imported a luxurious vessel for partying. 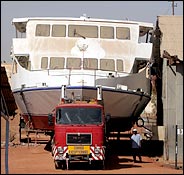 Source of photo: online version of the NYT article cited above.

(p. 195) As Robert Solow wrote acidly in 1994, commenting on a series of papes on growth and imperfect competition, “Schumpeter is a sort of patron saint in this field. I may be alone in thinking that he should be treated like a patron saint: paraded around one day each year and more or less ignored the rest of the time.”
Schumpeter was a most unwelcome guest at the neoclassical table. Yet it was hard for the mainstream to reject him out of hand, since Schumpeter was such a celebrant of capitalism and entrepreneurship. He thought it a superb, energetic, turbulent system, one that led to material betterment over time. He hoped it would triumph over socialism. He just didn’t believe it functioned in anything close to the way the Marshallians did, and he was appalled that economists could apply an essentially static model to something as profoundly dynamic as capitalism. Schumpeter wrote presciently, “Whereas a stationary feudal economy would still be a feudal economy, and a stationary socialist economy would still be a socialist economy, stationary capitalism is a contradiction in terms.” Its very essence, as the economic historian Nathan Rosenberg wrote, (p. 196) echoing Schumpeter, “lies not in equilibrating forces, but in the inevitable tendency to depart from equilibrium” every time an innovation occurs.

Source:
Kuttner, Robert. Everything for Sale: The Virtues and Limits of Markets. Chicago: University of Chicago Press, 1999.

Mark Pendergrast, in his opus on coffee, tells us about Bill Fishbein, a coffee retailer from Rhode Island, who wanted to help small, poor, coffee farmers in Guatemala:

(p. 419) . . . , Fishbein wanted to do something to help.  At first, he worked with established nongovernment organizations (NGOs) but soon became disillusioned. Too often, the NGOs simply threw money at communities, then declared projects successful even without long-term improvements.  "It amounts to a network to move money around, to pull the heartstrings of donors," he complains. 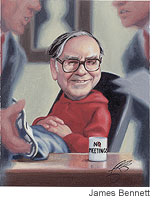 Warren Buffett. Source of image: online version of WSJ article cited below.
A couple of years ago, I think, in the mid-afternoon we went into a nearly deserted Dairy Queen near Dodge and 115th and walked by an old guy eating ice cream with a couple of others (I’m guessing his daughter and grandchild). I said to Jeanette and Jenny something like: if that guy wasn’t dressed so weirdly, I’d say he might be Warren Buffett. He was wearing some kind of overalls with the word WOODS printed in capitals on the back. Suddenly I remembered that I had seen in the paper that Buffett had caddied for Tiger Woods in some sort of celebrity tournament a few weeks earlier. We were tempted to ask for his autograph, but we let him eat his ice cream in peace.

(p. A1) He spends most of his day alone in an office with no computer. He makes swift investment decisions, steers clear of meetings and advisers, eschews set procedures and doesn’t require frequent reports from managers.
. . .
(p. A5A (sic)) Mr. Buffett tends to stick to investments for the long haul, even when the going gets bumpy. Mr. Sokol recalls bracing for an August 2004 meeting at which he planned to break the news to Mr. Buffett that the Iowa utility needed to write off about $360 million for a soured zinc project. Mr. Sokol says he was stunned by Mr. Buffett’s response: “David, we all make mistakes.” Their meeting lasted only 10 minutes.
“I would have fired me if I was him,” Mr. Sokol says.
“If you don’t make mistakes, you can’t make decisions,” Mr. Buffett says. “You can’t dwell on them.” Mr. Buffett notes that he has made “a lot bigger mistakes” himself than Mr. Sokol did.

For the full article, see:
SUSAN PULLIAM and KAREN RICHARDSON. “Warren Buffett, Unplugged; The hands-off billionaire shuns computers, leaves his managers alone, yet has notched huge returns. He just turned 75. Can anyone fill his shoes?” THE WALL STREET JOURNAL (Sat., November 12, 2005): A1 & A5A.

Source of graph: online version of WSJ article cited above.