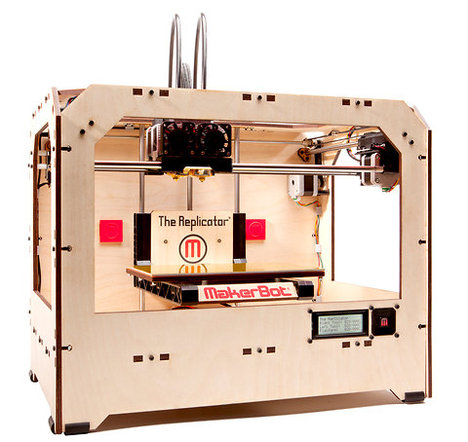 The Replicator 3-D printer. Source of photo: online version of the NYT article quoted and cited below.

Back in 2005 technology “visionary” Neil Gershenfeld predicted the soon to be seen day when personal fabricators would follow the path of computers which progressed from mainframes costing millions to mini-computers costing hundreds of thousands to personal computers costing a couple of thousand. Well apparently that day is here.
Now we will see if the implications are as far-reaching as Gershenfeld predicted.

Q. What does a 3-D printer use?
A: Spools of coiled A.B.S. (acrylonitrile butadiene styrene) plastic that costs about $45 each per kilogram. This is the same materials that is used to make Lego blocks. It is strong, safe and comes in many colors. One spool can make about 176 chess pieces.

For the full story, see:
WARREN BUCKLEITNER. “Gadgetwise; A 3-D Printer for Under $2,000: What Can It Do?” The New York Times (Thurs., January 26, 2012): B7.
(Note: bold in original.)
(Note: the online version of the article was dated January 23, 2012, and had the title “3-D Printing for the Masses: MakerBot’s Replicator.” The online version differs in several places from the print version. Where they differ, I quote the print version.)

(p. 113) It was Joseph Schumpeter who pointed out that the competition which keeps a businessman awake at night is not that from his rivals cutting prices, but that of entrepreneurs making (p. 114) his product obsolete. As Kodak and Fuji slugged it out for dominance in the 35mm film industry in the 1990s, digital photography began to extinguish the entire market for analogue film – as analogue records and analogue video cassettes had gone before. Creative destruction, Schumpeter called it. His point was that there is just as much creation going on as destruction – that the growth of digital photography would create as many jobs in the long run as were lost in analogue, or that the savings pocketed by a Wal-Mart customer are soon spent on other things, leading to the opening of new stores to service those new demands. In America, roughly 15 per cent of jobs are destroyed every year; and roughly 15 per cent created. 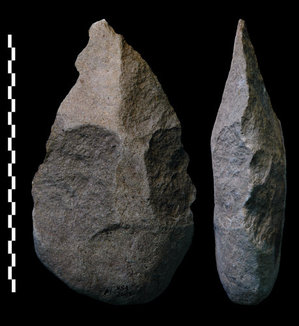 “A study dates human tools like this ax to 1.76 million years ago.”

(p. A8) A new geological study, being reported Thursday in the journal Nature, showed that tools from a site near Lake Turkana in Kenya were made about 1.76 million years ago, the earliest of their ilk found so far. Previous dates were estimates ranging from 1.4 million to 1.6 million years ago.

Although no erectus fossils were found with the Turkana tools, a skull of that species was excavated last year in the same sediment level across the lake. This suggests that Homo erectus was responsible for these particular tools, which were made with what scientists refer to as Acheulean technology. The term connotes the type of oval and pear-shaped hand axes and other implements that were a specialty of early humans.

(p. C4) Much of the research on decision-making focuses on the “choice paralysis” commonly thought to result from having too many options. But new research suggests that instead of being a debilitating factor, having many options actually sharpens our focus on quality. 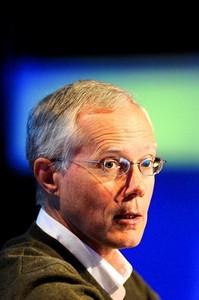 “Scott Cook.” Source of caption and photo: online version of the WSJ article quoted and cited below.

(p. B4) WSJ: Before building Intuit, you worked at large firms like Procter & Gamble Co. and Bain & Co. What prompted you to leave Corporate America and start your own business?

Mr. Cook: My wife complained about doing the bills. It was a hassle. I had been trained at P&G to find a problem that everybody has and that you could solve with technology. And this struck me as a classic entrepreneurial opportunity. Nobody likes to pay bills. There were about 20-plus personal-finance software products already on the market.
. . .
WSJ: How much start-up capital did have to work with?
Mr. Cook: We raised between $500,000 and $600,000. It came from my savings and my retirement plan that I cashed out. I also borrowed money from my parents. Lines of credit were another big source of capital. The banks were lending to me and my wife as a couple, not the business. We tried venture capital and that failed. We talked to about two dozen venture-capital firms and they all shut us down. We did get two angels to invest, but they put in only $151,000, total.

(p. 71) At Mezherich, in what is now Ukraine, 18,000 years ago, jewellery made of shells from the Black Sea and amber from the Baltic implied trade over hundreds of miles.
This is in striking contrast to the Neanderthals, whose stone tools were virtually always made from raw material available within an hour’s walk of where the tool was used. 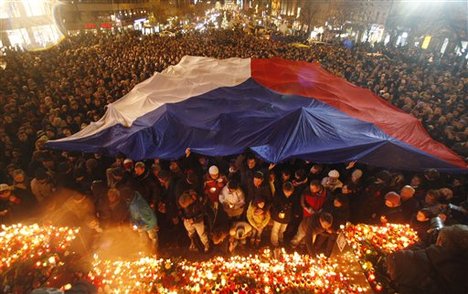 “Mourning; Thousands gathered on Sunday in Wenceslas Square in Prague, some under a Czech national flag, to marke the death of Vaclav Havel.” Source of caption: print version of the NYT obituary quoted and cited below. Source of photo: http://4.bp.blogspot.com/-PGUPpCvWzRQ/Tu9C59lXdJI/AAAAAAAAAEQ/0lcI7EfO8P4/s1600/Vaclav%2BHavel%2B3.jpg [The photo appeared on p. A10 of the print version of the obituary, but was not included with the online version.]

(p. A1) Vaclav Havel, the Czech writer and dissident whose eloquent dissections of Communist rule helped to destroy it in revolutions that brought down the Berlin Wall and swept Mr. Havel himself into power, died on Sunday. He was 75.
. . .
A shy yet resilient, unfailingly polite but dogged man who articulated the power of the powerless, Mr. Havel spent five years in and out of Communist prisons, lived for two decades under close secret-police surveillance and endured the suppression of his plays and essays. He served 14 years as president, wrote 19 plays, inspired a film and a rap song and remained one of his generation’s most seductively nonconformist writers.
All the while, Mr. Havel came to personify the soul of the Czech nation.
His moral authority and his moving use of the Czech language cast him as the dominant figure during Prague street demonstrations in 1989 and as the chief behind-the-scenes negotiator who brought about the end of more than 40 years of Communist rule and the peaceful transfer of power known as the Velvet Revolution, a revolt so smooth that it took just weeks to complete, (p. A10) without a single shot fired.
. . .
He never stopped preaching that the fight for political freedom needed to outlive the end of the cold war. He praised the American invasion of Iraq for deposing a dictator, Saddam Hussein.
He continued to worry about what he called “the old European disease” — “the tendency to make compromises with evil, to close one’s eyes to dictatorship, to practice a politics of appeasement.”