(p. B1) PRAGUE — When Zbynek Frolik needed new employees to handle surging orders at his cavernous factories in central Bohemia, he fanned advertisements across the Czech Republic. But in a prosperous economy where nearly everyone had work, there were few takers.
Raising wages didn’t help. Nor did offers to subsidize housing.
So he turned to the robots.
“We can’t find enough humans,” said Mr. Frolik, whose company, Linet, makes state-of-the art hospital beds sold in over 100 countries. “We’re trying to replace people with machines wherever we can.”
Such talk usually conjures visions of a future where employees are no longer needed. In many major economies, companies are experimenting with replacing factory workers, truck drivers and even lawyers with artificial intelligence, raising the specter of a mass displacement of jobs.
But in Eastern Europe, robots are being enlisted as the solution for a shortage of workers. Often they are helping to create new types of jobs as businesses in the Czech Republic, Hungary, Slovakia and Poland try to stay agile and competitive. Growth in these countries, which became low-cost manufacturing hubs for Europe after the fall of Communism, has averaged 5 percent in recent years, buoyed by the global recovery.. 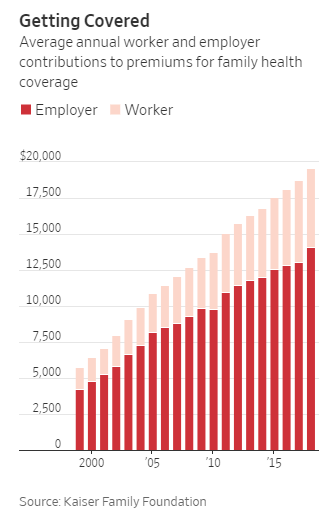 (p. A1) The average cost of employer health coverage offered to workers rose to nearly $20,000 for a family plan this year, according to a new survey, capping years of increases that experts said are chiefly tied to rising prices paid for health services.

(p. A6) Counties along the U.S. shoreline that endured hurricane-strength winds from Florence in September experienced a surge in population from 1980 to 2017, with an increase of 95 people per square mile–more than double the density. Overall, Gulf and East Coast shoreline counties, those vulnerable to hurricane strikes, increased by 160 people per square mile, compared with 26 people per square mile in the rest of the mainland, over the same period.
“Coastal population and exposure growth is certainly the predominant driver of increased damage costs associated with hurricanes,” says Steve Bowen, director and meteorologist at consulting firm Aon ‘s Risk Solutions division.

For the full story, see:
Kara Dapena. “‘When Videogames Can Help.” The Wall Street Journal (Thursday, Oct. 4, 2018): A6.
(Note: the online version of the story has the date Sept. 29, 2018, and has the title “The Rising Costs of Hurricanes.” Unlike the print version, the online version was much longer, sometimes had different wording, and listed an author. Where wording differed in the passages quoted above, the online version was used.)

My book Openness to Creative Destruction: Sustaining Innovative Dynamism, is forthcoming from Oxford University Press in June 2019.
The book shows how life has improved through innovation, how innovation has occurred through the efforts of inventors and innovative entrepreneurs, how workers on balance benefit from a system of innovative dynamism, and how policies can be crafted to encourage the innovative entrepreneur to bring us more innovations.
A PDF of a handout that includes the current draft of the Table of Contents of my book can be found on the first page of artdiamond.com.
Several scholars have graciously looked at an advance copy of my book, and offered me early praise for it. During the next several weeks I occasionally will present some of their comments. (These will be presented roughly in the order in which I received them.)

(p. A9) It isn’t often that children are encouraged to play videogames.
But a group of Boston Children’s Hospital researchers have developed videogames for children with conditions such as attention deficit hyperactivity disorder (ADHD) and anxiety, or those who just need to learn how to control their emotions better.
The videogames track a child’s heart rate, displayed on the screen. The games get increasingly difficult as the player’s heart rate increases. To be able to resume playing without extra obstacles the child has to calm themselves down and reduce their heart rate.
“What we’re trying to do is build emotional strength for kids,” said Jason Kahn, co-founder and chief scientific officer of Mighteor, a Boston-based company and spinoff of Boston Children’s Hospital. BCH runs an accelerator and funded some of the research and development of the products. They retain a small piece of ownership of Mighteor. Dr. Kahn worked as a developmental psychologist at Boston Children’s for seven years and maintains an affiliation there but launched the company in November [2016].
The games help children “build muscle memory,” he said. So once they are able to reduce their heart rate over and over again the response of physiologically calming themselves down becomes more automatic.

For the full story, see:
Sumathi Reddy. “‘When Videogames Can Help.” The Wall Street Journal (Tuesday, July 18, 2017): A9.
(Note: bracketed year added.)
(Note: the online version of the story has the date July 17, 2017, and has the title “YOUR HEALTH; When Children Can Benefit From Playing Videogames.”)

As I explain to my micro principles students each semester, if New York wants to save elephants, they would keep ivory on the market, increasing its supply and reducing its price, thereby reducing the incentive for poachers to kill elephants. [I first saw this argument made in the Baumol and Blinder text that I used many of years ago in my micro principles classes.]

(p. A19) A loud rumble and giant billows of dust interrupted an otherwise serene day in Central Park on Thursday as hundreds of cream-colored carvings of dragons, Buddhas and horses awaited their public execution.

Onlookers waved paper fans reading “Protect their home.” They cheered as sculptures and jewelry made from elephant tusks were carried on a conveyor belt and dropped in a pulverizer.
Brian Hackett, an animal-welfare activist from New Jersey, patiently awaited his turn to choose a carving from a table to be destroyed. For him, the mood was solemn.
“Every piece, no matter how polished, represents a beautiful animal that was slaughtered,” Mr. Hackett said.
The carvings were confiscated in recent ivory busts in New York. They once belonged on the faces of a least 100 slaughtered elephants. Nearly two tons of ivory worth about $8 million was destroyed at the “Ivory Crush” event, which was timed to precede World Elephant Day on Aug. 12 [2017].
. . .
Rachel Karr, 48, the owner of Hyde Park Antiques on the Lower East Side, who specializes in 18th-century antiques, said the ivory-crushing events upset her and other antique collectors because some of the ivory found in bona fide antiques could be 300 to 400 years old and could have religious and historic value. For example, in teapots from the 18th century, the handles were carved from ivory to protect hands from burns, because ivory does not conduct heat.
“Even with my love of nature, I simply cannot understand what good it does to destroy things that were worked on 300, 400 years ago before conservation was part of daily language,” Ms. Karr said.
“Face it, we’re the original recyclers, antique dealers,” she said. “We have no interest in using new ivory at all. We are willing to say we aren’t willing to use it to repair old ivory.”
Sam Wasser, a professor at the University of Washington who has performed forensic analysis on seized ivory for the last 13 years and analyzed the ivory that was crushed, said it was unlikely the destroyed carvings were more than 100 years old. The results are pending.
Iris Ho, who is the wildlife campaigns manager at Humane Society International, said the existing law does enough to protect antiques. The law provides exceptions for antiques that are determined to be at least 100 years old with only a small amount of ivory.

For the full story, see:
Hannah Alani. “Ivory Is Destroyed to Save Elephants.” The New York Times (Friday, Aug. 4, 2017): A19.
(Note: ellipses, and bracketed year, added.)
(Note: the online version of the story has the date Aug. 3, 2017, and has the title “About $8 Million of Elephant Ivory Destroyed in Central Park.” The online version says that the article appeared on p. A21 of the New York edition. It appeared on p. A19 of my copy of the National Edition.)

(p. D5) “Global greening” sounds lovely, doesn’t it?
Plants need carbon dioxide to grow, and we are now emitting 40 billion tons of it into the atmosphere each year. A number of small studies have suggested that humans actually are contributing to an increase in photosynthesis across the globe.
Elliott Campbell, an environmental scientist at the University of California, Santa Cruz, and his colleagues last year published a study that put a number to it. Their conclusion: plants are now converting 31 percent more carbon dioxide into organic matter than they were before the Industrial Revolution.
. . .
It’s not just strawberries and other crops that are taking in extra carbon dioxide. So are the forests, grasslands and other wild ecosystems of the world.
When scientists take into account both extra photosynthesis and respiration, they estimate that plants remove a quarter of the carbon dioxide we put in the atmosphere.
“That’s on par with what China emits,” said Dr. Campbell. “And China is the biggest global polluter.”
Even more remarkably, the plants have been scrubbing the same fraction of carbon dioxide out of the air even as our emissions explode.
“Every year we build more power plants, and every year the plants take out more CO2,” Dr. Campbell said.