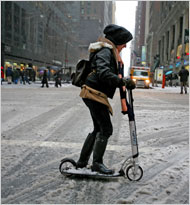 Environmentalist Michele Conlin scooters around New York during the winter.  Source of photo:  online version of the NYT article cited below.

(p. D7)  Ms. Conlin, . . . , said she saw “An Inconvenient Truth” in an air-conditioned movie theater last summer. “It was like, ‘J’accuse!’ ” she said. “I just felt like everything I did in my life was contributing to a system that was really problematic.” Borrowing a phrase from her husband, she continued, “If I was a student, I would march against myself.”

Source of graphs:  online version of the WSJ article cited below.

The graph on the left would not surprise Chris Anderson of The Long Tail.  Selling books online supplies greater variety, so that when online sales grow, overall book sales grow too.

(p. B1)  For six years, Borders Group Inc. has pursued a distinctly unfashionable strategy: betting big on bricks and mortar while paying little attention to the online world. But with online sales capturing an ever-increasing share of the book business, the No. 2 book retailer is reversing course.

Today, Borders announced its intention to reopen its own branded e-commerce Web site in early 2008, ending an alliance with Amazon.com Inc. that had been the core of its online strategy.

Photo on left is a Borders store; image on right is of Borders CEO George Jones.  Source of photo and image:  online version of the WSJ article cited above.

Cultural history background for the young:  at the beginning of every installment of the "Rowan and Martin Laugh-In" TV comedy review (circa 1968-1973), someone would sarcastically intone that the show was being broadcast from "beautiful downtown Burbank."

Excerpted below is Daniel Pink’s incredible conversation with a Burbank city clerk:

(p. 199)  What led me to this 100,000-person city in California’s San Fernando Valley—past the fish fountains, to the steps of City Hall—was a rumor I’d heard that Burbank puts free agents in jail.

(p. 200)  After fifteen minutes of probing, here’s the gist of what he tells me:  If I want to write from a home office in Burbank, I first must apply for a home occupation license.  The city would examine my application, and then come to my house to inspect the office from which I intended to work.  Once the inspector deemed my home office safe for writing and unthreatening to my neighbors, I could begin earning a living, my workplace now officially blessed by the city.

But that was only the beginning.  I’d have to pay a special tax.  And I’d have to abide by the strictures of Burbank Municipal Code Section 31-672—which, among other things, said:  My office couldn’t be larger than four hundred square feet or 20 percent of my home’s square footage.  I couldn’t put my home office in a "garage, carport, or any other area required or designated for the parking of vehicles."  The only "materials, equipment, and/or tools" I could use to do my work were things used by "a normal household."  I couldn’t use my home office to repair cars, sell guns, or operate a kennel.  And the only folks who could ever work with me in the office were people who lived with me.

That last provision alarmed me.

"Let me get this straight," I say.  "Let’s say I’m a writer collaborating on a screenplay.  If my collaborator comes over and we work on the screenplay together, that’s against the law?  It’s a misdemeanor to have a meeting at your house?"

"Isn’t California a ‘three strikes and you’re out’ state?"

Burbank, we we have a problem.  I hope it’s unlikely that a free agent who has three meetings at her house, and gets caught, prosecuted, and convicted each time, goes to jail for the rest of her life.  But the mere possibility reflects a wider problem with America’s legal, policy, and tax regimes.  They were built for a (p. 201) work world that has largely disappeared, and are ill equipped for the new world that has arrived.

(p. 244)  Whenever I walk into a public school, I stagger a bit at the entrance.  The moment I step across the threshold, I’m nearly toppled by a wave of nostalgia.  Most schools I’ve visited in the twenty-first century look and feel exactly like the central Ohio, public schools I attended in the 1970s.  The classrooms are the same size.  The desks stand in those same rows.  Bulletin boards preview the next national holiday.  The hallways even smell the same.  Sure, some classrooms might have a computer or two.  But in most respects, the schools American children attend today seem indistinguishable from the ones their parents and grandparents attended generations earlier.

At first such deja vu warmed my soul.  But then I thought about it.  How many other places look and feel exactly as they did twenty, thirty, or forty years ago?  Banks don’t.  Hospitals don’t.  Grocery stores don’t.  Maybe the sweet nostalgia I sniffed on those classroom visits was really the odor of stagnation. 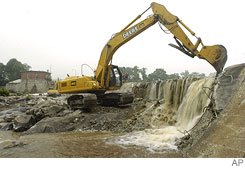 In response to environmental concerns, the Sandy River Dam is destroyed.  Source of photo:  online version of the WSJ article cited below.

The WSJ summarizes an article from the March Scientific American:

Environmental concerns have led the U.S. to pull down an increasing number of aging dams in the last decade, returning water to dry streams, birds to wetlands, and migratory fish to rivers. But environmentalists are also learning a torn-down dam can leave a host of challenges, writes Jane C. Marks, an ecologist at Northern Arizona University.

Sediment that has accumulated behind the dam can muddy the waters of a river, choking insects and algae that fish need to survive. Seeds buried in the sediment might unleash alien crops that kill local species and contaminated sediment might make fish poisonous.  . . .

Exotic fish can also become a problem. A dam in Arizona had been blocking exotic fish such as bass and sunfish from getting into a creek. Biologists were concerned that, without the dam, local fish in the creek would be wiped out as the exotic fish arrived.

Dams can cause dilemmas beyond the environment. Ms. Marks mentions how a father and son bitterly disagreed over the Loire dams’ removal. The father wanted the salmon and wild waters of his youth to return, whereas the son wanted to preserve the swims and boating trips of his youth.

Steven Johnson has a great passage on the contribution of the amateur in The Ghost Map story (see below).

This is a theme that resonates.  In The Long Tail, Chris Anderson makes the case for amateurs in astronomy.  (Is it he, who points out that the root of the word "amateur" is to love?)

Stigler had an important early paper in which he discusses the professionalization of the economics profession.  He praises the results, but what he presents provides some grist for the mill of criticism too.  For example, the exit of the amateurs, reduced the applicability of the work, and turned research more toward internal puzzle-solving, and model-building.

The web is a leveler in science, as suggested in an NBER paper.  Maybe the result will be a resurgence of amateurism, and maybe that won’t be all bad.

(p. 202)  But Broad Street should be understood not just as the triumph of rogue science, but also, and just as important, as the triumph of a certain mode of engaged amateurism.  Snow himself was a kind of amateur.  He had no institutional role where cholera was concerned; his interest in the disease was closer to a hobby than a true vocation.  But Whitehead was an amateur par excellence.  He had no medical training, no background in public health.  His only credentials for solving the mystery behind London’s most devastating outbreak of disease were his open and probing mind and his intimate knowledge of the community.

Johnson, Steven. The Ghost Map: The Story of London’s Most Terrifying Epidemic – and How It Changed Science, Cities, and the Modern World. New York: Riverhead Books, 2006.

(Note:  A probably relevant, much praised book, that I have never gotten around to reading, is Martin J.S. Rudwick’s The Great Devonian Controversy:  The Shaping of Scientific Knowledge among Gentlemanly Specialists.)

The WSJ summarizes a Feb. 18, 2007 article from the Boston Globe.  Here is an excerpt from the summary:

(p. B12) Among the many changes global warming might bring, the melting ice in the Arctic could eventually give access to the oil and gas under the ice, estimated by the U.S. Geological Survey to amount to a quarter of the world’s reserves. Fifty-five million years ago the region was a warm land of crocodiles and palm trees whose remains have since become fossil fuel, reports Drake Bennett. The Arctic ice has made the fuel practically inaccessible by making drilling hard and blocking ships.