(p. 5A) PORT-AU-PRINCE, Haiti (AP) — Scientists have presented the strongest evidence yet that U.N. peacekeepers imported the chol­era strain that has killed more than 5,500 people in Haiti.
A report published in the July issue of the Emerging Infectious Diseases journal says research findings “strongly suggest” that the U.N. contingent from Nepal contaminated a Haitian river because of poor sanitation at a base. Author Renaud Piarroux had previously blamed peace­keepers. This study is more com­plete and its methodology was reviewed by other scientists. 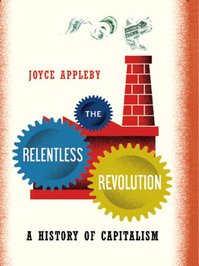 (p. 15) What is the nature of capitalism? For Joseph Schumpeter, the Austrian-born economist whose writings have acquired a special relevance in the past year or two, this most modern of economic systems “incessantly revolutionizes the economic structure from within, incessantly destroying the old one, incessantly creating a new one.” Capitalism, Schumpeter proclaimed, cannot stand still; it is a system driven by waves of entrepreneurial innovation, or what he memorably described as a “perennial gale of creative destruction.”

Schumpeter died in 1950, but his ghost looms large over Joyce Appleby’s splendid new account of the “relentless revolution” unleashed by capitalism from the 16th century onward. Appleby, a distinguished historian who has dedicated her career to studying the origins of capitalism in the Anglo-American world, here broadens her scope to take in the global history of capitalism in all its creative — and destructive — glory.
She begins “The Relentless Revolution” by noting that the rise of the economic system we call capitalism was in many ways improbable. It was, she rightly observes, “a startling departure from the norms that had prevailed for 4,000 years,” signaling the arrival of a new mentality, one that permitted private investors to pursue profits at the expense of older values and customs.
In viewing capitalism as an extension of a culture unique to a particular time and place, Appleby is understandably contemptuous of those who posit, in the spirit of Adam Smith, that capitalism was a natural outgrowth of human nature. She is equally scornful of those who believe that its emergence was in any way inevitable or inexorable.
. . .
. . . , she captures how a new generation of now forgotten economic writers active long before Adam Smith built a case “that the elements in any economy were negotiable and fluid, the exact opposite of the stasis so long desired.” This was a revolution of the mind, not machines, and it ushered in profound changes in how people viewed everything from usury to joint stock companies. As she bluntly concludes, “there can be no capitalism . . . without a culture of capitalism.”
. . .
The individual entrepreneur is at the center of her analysis, and her book offers thumbnail sketches of British innovators from James Watt to Josiah Wedgwood. She continues on to the United States and Germany, giving readers a whirlwind tour of the lives and achievements of a host of men whom she calls “industrial leviathans” — Vanderbilt, Rockefeller and Carnegie in the United States; Thyssen, Siemens and Zeiss in Germany. All created new industries while destroying old ones.

(p. 59) . . . , not everyone was happy with the loss of open hearths. Many people missed the drifting smoke and were convinced they had been healthier when kept “well kippered in wood smoke,” as one observer put it. As late as 1577, a William Harrison insisted that in the days of open fires our heads did never ake.” Smoke in the roof space discouraged nesting birds and was believed to strengthen timbers. Above all, people complained that they weren’t nearly as warm as before, which was true. Because fireplaces were so inefficient, they were constantly enlarged. Some became so enormous that they were built with benches in them, letting people sit inside the fireplace, almost the only place in the house where they could be really warm. 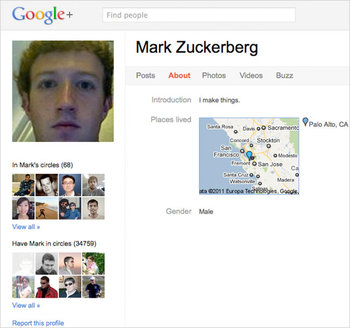 “The profile page of Mark Zuckerberg on Google+, a service created to compete with Facebook.” Source of caption and image: online version of the NYT article quoted and cited below.

(p. B1) Any guesses as to who is the most popular person on Google+, the company’s new social networking service? Ashton Kutcher, perhaps? Or Lady Gaga?

Actually, that title is currently held by Mark Zuckerberg, the founder and chief executive of Facebook — the very service that Google+ was meant to challenge.
As of Tuesday evening, Mr. Zuckerberg had nearly 35,000 people following his updates on the service, more than anyone else in a broad survey of Google+ profiles by Social Statistics, an outside service. His fan base exceeds that of Larry Page, one of the founders of Google and its recently appointed chief executive, who had only 24,000 people following him.
Google+ is less than a week old and is still not yet widely available to the public. But access to the service, which lets people share photos, links, status updates and video chats with groups of friends, is already in high demand among early adopters who are eager to play with its (p. B8) features. That includes Mr. Zuckerberg, who apparently signed up to keep tabs on his new adversary.

(p. 6A) LOS ANGELES — Scientists have isolated a bacterium from the gut of Australian Tam­mar wallabies that allows the animals to consume and digest grasses, leaves and other plant material without producing co­pious amounts of methane, as cattle do.
The microbe was discovered through a process described in a report published online recently by the journal Science.
Ultimately, the microbe might be put to use to reduce the car­bon footprint of cows and other ruminants, said report co-author Mark Morrison, a microbial bi­ologist in St. Lucia, Queensland.
. . .
The methane-rich burps and flatulence of cattle have been blamed for 28 percent of that greenhouse gas’s global emis­sions due to human activity. Like other cud-chewing mammals, they produce methane as their systems work to break down and ferment the plant matter they eat. 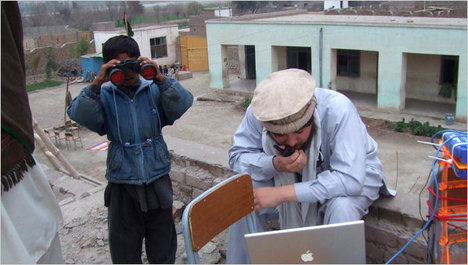 “Volunteers have built a wireless Internet around Jalalabad, Afghanistan, from off-the-shelf electronics and ordinary materials.” Source of caption and photo: online version of the NYT article quoted and cited below.

The main point of the passages quoted below is to illustrate how, with the right technology, we can dance around tyrants in order to enable human freedom.
(But as a minor aside, note in the large, top-of-front-page photo above, that Apple once again is visibly the instrument of human betterment—somewhere, before turning to his next challenge, one imagines a fleeting smile on the face of entrepreneur Steve Jobs.)

(p. 1) The Obama administration is leading a global effort to deploy “shadow” Internet and mobile phone systems that dissidents can use to undermine repressive governments that seek to silence them by censoring or shutting down telecommunications networks.

The effort includes secretive projects to create independent cellphone networks inside foreign countries, as well as one operation out of a spy novel in a fifth-floor shop on L Street in Washington, where a group of young entrepreneurs who look as if they could be in a garage band are fitting deceptively innocent-looking hardware into a prototype “Internet in a suitcase.”
Financed with a $2 million State Department grant, the suitcase could be secreted across a border and quickly set up to allow wireless communication over a wide area with a link to the global Internet. 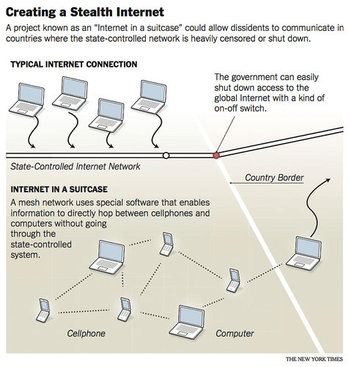 (p. 58) One thing that did not escape notice in medieval times was that nearly all the space above head height was unusable because it was so generally filled with smoke. An open hearth had certain clear advantages–it radiated heat in all directions and allowed people to sit around it on all four sides–but it was also like having a permanent bonfire in the middle of one’s living room. Smoke went wherever passing drafts directed it–and with many people coming and going, and all the windows glassless, every passing gust must have brought somebody a faceful of smoke–or otherwise rose up to the ceiling and hung thickly until it leaked out a hole in the roof.