(p. D6) Public spaces are hard to safely navigate, or totally off-limits and, as a result, I haven’t felt this strongly about my car since I was 16 — not just grateful, but deeply attached. Not just attached, but somehow amalgamated.

Every car is a getaway, even when it’s parked.

In my neighborhood, where so many people live in multigenerational homes, parked cars now double as quiet meeting spaces, meditation rooms, listening stations, nap pods, whatever extra spaces we need.

We sip coffee, fight loudly and make out in our cars. We eat snacks and take important phone calls and watch TikTok videos and put the seats way back and just breathe.

I haven’t seen my brother, who lives 15 minutes away from me, in weeks. He uses his tiny car as an office. Never mind that the floor is covered in Cheerios, and the windows are dotted with peeling stickers.

Week Three of lockdown, and it’s a privilege if you can work safely, in isolation, if you can escape momentarily into your car. Even if — especially if — you have nowhere else to go but home.

(Note: the online version of the commentary has the date March 31, 2020, and has the title “Dining and Driving on the Empty Freeways of Los Angeles.”)

(p. B5) “If you look, there are a heck of a lot of successful manufacturing parts of the country right now,” Kevin Hassett, the departing chairman of the White House Council of Economic Advisers, said in an interview. “But look at where they’re being created.”

(Note: the online version of the story has the date June 13, 2019, and has the title “In the Race for Factory Jobs Under Trump, the Midwest Isn’t Winning.”)

(p. A6) Japan has 512,000 fewer people this year than last, according to an estimate released on Tuesday by the country’s welfare ministry. That’s a drop of more than the entire population of the city of Atlanta.

The numbers are the latest sign of Japan’s increasing demographic challenges.

Births in the country — which are expected to drop below 900,000 this year — are at their lowest figure since 1874, when the population was about 70 percent smaller than its current 124 million.

The total number of deaths, on the other hand, is increasing. This year, the figure is expected to reach almost 1.4 million, the highest level since the end of World War II, a rise driven by the country’s increasingly elderly population.

(p. B1) NORMAL, Ill. — By definition, the time of the world’s richest man is pretty valuable. But early last fall, Jeff Bezos sought out a 36-year old entrepreneur named R.J. Scaringe and spent the better part of a day in Plymouth, Mich., at the company he founded, Rivian.

Mr. Bezos got a preview of Rivian’s electric pickup truck and sport utility vehicle and liked what he saw. Not long after his visit, Amazon led a $700 million investment in Rivian. Two months later, in April, Ford Motor invested $500 million. All told, Rivian has raised $1.7 billion without selling a single truck or S.U.V.

(p. B6) Rivian is promising to do for trucks what Tesla did for luxury cars.

That’s where the similarities between the two electric automobile makers end. Even as Tesla and its brash chief executive, Elon Musk, made headlines by setting and falling short of some audacious goals, Mr. Scaringe and Rivian have spent a decade fine-tuning their designs.

Mr. Scaringe founded Mainstream Motors, the business that would later become Rivian, in 2009 after completing a doctorate in mechanical engineering at the Massachusetts Institute of Technology.

His timing was odd to say the least — the financial crisis had made investors skittish, and the bankruptcies of General Motors and Chrysler did not bode well for an automotive start-up.

Family and friends provided the initial funding, and Mr. Scaringe and his father both took out second mortgages to raise money. END_OF_DOCUMENT_TOKEN_TO_BE_REPLACED

(p. A25) Curtis and S. Prestley Blake opened Friendly (the chain became Friendly’s in 1989) with a $547 loan from their parents in their hometown, Springfield, Mass., in the summer of 1935. With the Depression gripping the country, the brothers enticed customers by selling two scoops of ice cream for a nickel, about half the price their competitors charged (and the equivalent of about 95 cents today).

“Our customers didn’t have any money, and neither did we,” Mr. Blake told The Republican, a Springfield newspaper, in 2017.

Their shop was an instant success, with a line out the door on opening night. But it required constant labor.

Mr. Blake and his brother sold Friendly to the Hershey Foods Corporation in 1979 for about $164 million (nearly $580 million in today’s dollars).

(Note: the online version of the obituary has the date May 30, 2019, and has the title “Hong Kong Protesters Descend on Airport, With Plans to Stay for Days.”)

(p. 14) For scholars and popular writers alike, the Great Depression has long been a kind of economic Rorschach test. Free marketers look at the economic disaster and blame the Smoot-Hawley tariff, which inaugurated a global trade war; monetarists attack the Federal Reserve for its tight-money policies; Keynesians berate Herbert Hoover for his attempts to balance the budget as the crisis worsened.

Generally, . . . , Morris is remarkably evenhanded, giving both sides of scholarly debates in deep detail. This is particularly the case in his coverage of the New Deal, where he weighs the practical effects of the dizzying array of policies begun by Roosevelt, from his devaluation of the dollar to the creation of the Civilian Conservation Corps. And Morris explains in accessible prose how economists have used modeling to study the New Deal (he wryly notes that this “is still a work in progress — if only because results are often suspiciously consistent with the political dispositions of the modeler”).

END_OF_DOCUMENT_TOKEN_TO_BE_REPLACED 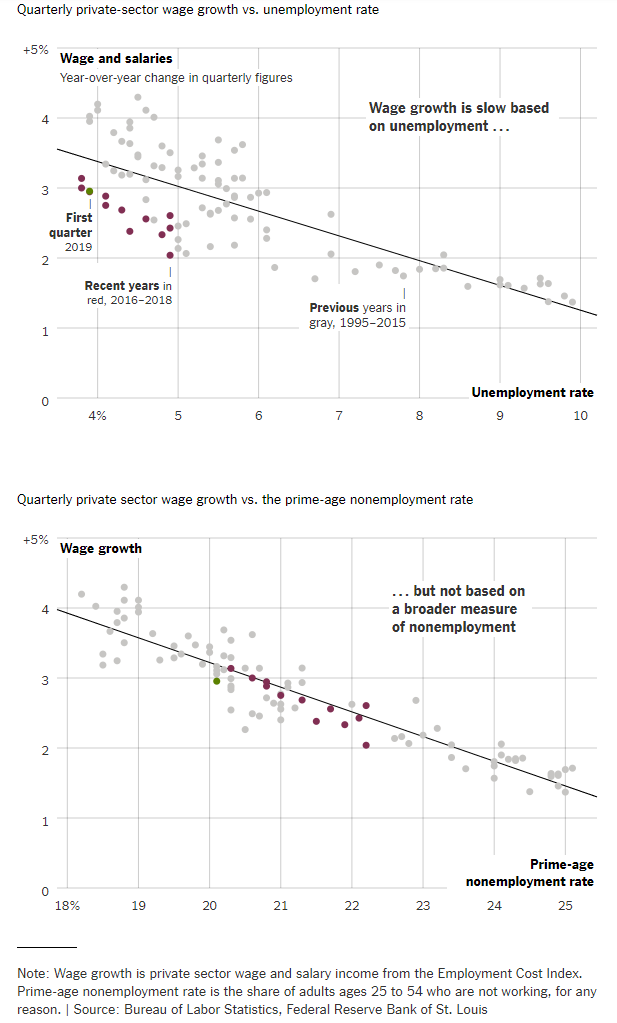 (p. B5) Many economists were puzzled by the slow pace of pay increases because it looked as if a fundamental relationship had broken down.

Economists proposed all sorts of theories to explain the mystery: Globalization and automation meant that Americans were competing against lower-paid workers overseas and against robots at home. The rising power of the biggest corporations, paired with falling rates of unionization, made it harder for workers to negotiate for higher pay. Sluggish productivity growth meant that companies couldn’t raise pay without eating into profits.

The recent uptick in wage growth suggests a simpler explanation: Perhaps the job market wasn’t as good as the unemployment rate made it look.

The government’s official definition of unemployment is relatively narrow. It counts only people actively looking for work, which means it leaves out many students, stay-at-home parents or others who might like jobs if they were available. If employers have been tapping into that broader pool of potential labor, it could help explain why they haven’t been forced to raise wages faster.

It appears as if that is exactly what is happening. In recent months, more than 70 percent of people getting jobs had not been counted as unemployed the previous month. That is well above historical levels, and a sign that the strong labor market is drawing people off the sidelines.

Ben Casselman. “Why American Wages Are Finally Rising, a Full Decade After the Great Recession.” The New York Times (Friday, May 3, 2019): B1 & B5.

(Note: the online version of the story has the date May 2, 2019, and has the title “Why Wages Are Finally Rising, 10 Years After the Recession.”)