(p. B16) Steve Dunleavy, a hell-raising Australian who transfused his adrenaline into tabloid newspapers and television as a party crasher to American journalism, died on Monday [June 24, 2019] at his home in Island Park, N.Y.

He was said to have been the model for Wayne Gale, the manic Australian reporter played by Robert Downey Jr. in Oliver Stone’s 1994 film “Natural Born Killers.” But he gravitated closer to the Runyonesque characters in Ben Hecht and Charles MacArthur’s play “The Front Page” from 1928.

(p. B1) As the use of artificial intelli-(p. B3)gence has become a part of the industry’s toolbox, journalism executives say it is not a threat to human employees. Rather, the idea is to allow journalists to spend more time on substantive work.

“The work of journalism is creative, it’s about curiosity, it’s about storytelling, it’s about digging and holding governments accountable, it’s critical thinking, it’s judgment — and that is where we want our journalists spending their energy,” said Lisa Gibbs, the director of news partnerships for The A.P.

In addition to leaning on the software to generate minor league and college game stories, The A.P., like Bloomberg, has used it to beef up its coverage of company earnings reports. Since joining forces with Automated Insights, The A.P. has gone from producing 300 articles on earnings reports per quarter to 3,700.

The A.P., The Post and Bloomberg have also set up internal alerts to signal anomalous bits of data. Reporters who see the alert can then determine if there is a bigger story to be written by a human being. During the Olympics, for instance, The Post set up alerts on Slack, the workplace messaging system, to inform editors if a result was 10 percent above or below an Olympic world record. 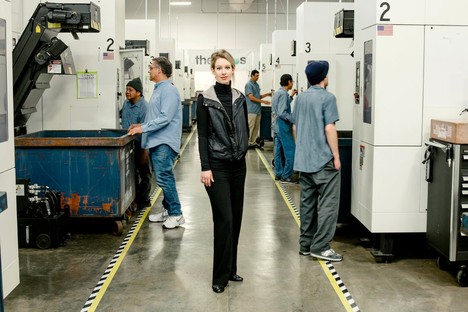 Elizabeth Holmes, former CEO of Theranos. (Apparently it takes more than a black turtleneck to be Steve Jobs.) Source of photo: online version of the NYT article quoted and cited below.

The lab was a fake. The devices Biden saw weren’t close to being workable; they had been staged for the visit.
Biden was not the only one conned. In Theranos’s brief, Icarus-like existence as a Silicon Valley darling, marquee investors including Robert Kraft, Betsy DeVos and Carlos Slim shelled out $900 million. The company was the subject of adoring media profiles; it attracted a who’s who of retired politicos to its board, among them George Shultz and Henry Kissinger. It wowed an associate dean at Stanford; it persuaded Safeway and Walgreens to spend millions of dollars to set up clinics to showcase Theranos’s vaunted revolutionary technology.
. . .
Even for a private company like Theranos, disclosure is the bedrock of American capitalism — the “disinfectant” that allows investors to gauge a company’s prospects. Based on Carreyrou’s dogged reporting, not even Enron lied so freely.
. . .
Holmes . . . pleaded with Rupert Murdoch — the power behind The Wall Street Journal and, as it happened, her biggest investor — to kill the story. It’s a good moment in American journalism when Murdoch says he’ll leave it to the editors.
. . .
Some of the directors displayed a fawning devotion to Holmes — in effect becoming cheerleaders rather than overseers. Shultz helped his grandson land a job; when the kid reported back that the place was rotten, Grandpa didn’t believe him. There is a larger moral here: The people in the trenches know best. The V.I.P. directors were nectar for investor bees, but they had no relevant expertise.

The book under review, is:
Carreyrou, John. Bad Blood: Secrets and Lies in a Silicon Valley Startup. New York: Alfred A. Knopf, 2018.

(p. A1) What are the chances that readers will make it to the end of this article? About 40%.
If you do make it, that prediction will look smart. If you don’t, well, we said the odds were against it.
Such is the nature of the 40% rule, a favorite forecasting tactic of Wall Street analysts and other prognosticators trying to make a bold call without being too bold.
Former British Prime Minister Tony Blair said last month there’s a 40% chance that Brexit will be reversed; Citigroup Inc. analyst Jim Suva wrote that there’s a 40% chance Apple Inc. buys Netflix Inc.; and Nomura Holdings Inc. economist Lewis Alexander said there’s a 40% chance Nafta gets ripped up.
The nice thing about 40% is that you never have to say you were wrong, says Peter Tchir, a market strategist at Academy Securities. Say you predict the Dow Jones Industrial Average has a 40% chance of hitting 30000 before year-end.
“Get it right and you can say ‘See, I was telling everyone it could happen,’ ” he says. “Get it wrong and you can weasel your way out: ‘I didn’t say it was likely, I just said it was a strong possibility.’ “

(p. A23) A week ago, reporters and editors in the combined newsroom of DNAinfo and Gothamist, two of New York City’s leading digital purveyors of local news, celebrated victory in their vote to join a union.
On Thursday [November 2, 2018], they lost their jobs, as Joe Ricketts, the billionaire founder of TD Ameritrade who owned the sites, shut them down.

For the full story, see:
ANDY NEWMAN and JOHN LELAND. “DNAinfo and Gothamist Shut Down After Workers Join a Union.” The New York Times (Tuesday, November 3, 2017): A23.
(Note: bracketed date added.)
(Note: the online version of the story has the date NOV. 2, 2017, and has the title “DNAinfo and Gothamist Are Shut Down After Vote to Unionize.” The online version says that the page number of the New York edition was A21. The page number of my edition, probably midwest, was A23.)

Not just any leprechauns, mind you. This particular one–hat cocked, chin out, dukes up–happens to be the mascot for the Fighting Irish of the University of Notre Dame. The little, green-suited man is now in the same politically correct crosshairs that recently locked onto the Cleveland Indians’ Chief Wahoo. And ESPN’s Max Kellerman has called on Notre Dame to follow the Indians’ lead and send this leprechaun back to the end of the rainbow where he belongs.
“Many Irish-Americans are not offended, but many are,” Mr. Kellerman said.
. . .
. . . , Mr. Kellerman understands the zeitgeist well. His argument that the 34 million Irish-Americans who are mostly untroubled by the Fighting Irish leprechaun must be forced to yield to the demands of one outraged Irish-American friend is as current as they come.
But in the case of Notre Dame, the more interesting question may be the one the ESPN analyst never asks. Each week on national TV, especially during football season, the Fighting Irish offer their own lesson in diversity. Instead of condemning a cartoon leprechaun, perhaps America ought to be applauding the healthy cultural appropriation that happens every time African-American, Asian-American and Latino athletes compete together wearing jerseys or helmets proudly proclaiming themselves “Irish.”