Ben Rogge would have turned 100 in 2020. He believed that we flourish through innovation and that truth emerges through…

I enjoyed my recent lively conversation with James Pethokoukis, the DeWitt Wallace Fellow at the American Enterprise…

The alumni magazine of my alma mater, Wabash College, ran a nice notice of my Openness book on p. 56 of their “Class Notes” section: 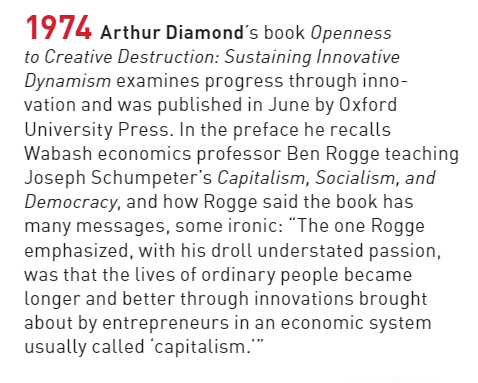 (p. 11) Less a conventional history than an extended polemic, “Capitalism in America: A History,” by Greenspan and Adrian Wooldridge, a columnist and editor for The Economist, explores and ultimately celebrates the Austrian economist Joseph Schumpeter’s concept of “creative destruction,” which the authors describe as a “perennial gale” that “uproots businesses — and lives — but that, in the process, creates a more productive economy.”

. . . , Greenspan’s admiration for the rugged individualists who populate the novels of Ayn Rand (who merits a nod in this history) and the frontier spirit that animated America’s early development shows no sign of weakening as Greenspan has aged. He and Wooldridge lament that Americans are “losing the rugged pioneering spirit” that once defined them and mock the “trigger warnings” and “safe spaces” that now obsess academia.

Their prescription for American renewal — reining in entitlements, instituting fiscal responsibility and limited government, deregulating, focusing on education and opportunity, and above all fostering a fierceness in the face of creative destruction — was Republican orthodoxy not so long ago. Before the Great Recession it was embraced by most Democrats as well, and more recently by President Bill Clinton, the recipient of glowing praise in these pages.

No longer. “Capitalism in America,” in both its interpretation of economic history and its recipe for revival, is likely to offend the dominant Trump wing of the Republican Party and the resurgent left among Democrats. It’s not clear who, if anyone, will pick up the Greenspan torch.

(Note: the online version of the review has the date Nov. 2, 2018, and has the title “Alan Greenspan’s Ode to Creative Destruction.”)

The book under review, is:

(p. A17) As the economist Joseph Schumpeter observed: “The capitalist process, not by coincidence but by virtue of its mechanism, progressively raises the standard of life of the masses.”

For Schumpeter, entrepreneurs and the companies they found are the engines of wealth creation. This is what distinguishes capitalism from all previous forms of economic society and turned Marxism on its head, the parasitic capitalist becoming the innovative and beneficent entrepreneur. Since the 2008 crash, Schumpeter’s lessons have been overshadowed by Keynesian macroeconomics, in which the entrepreneurial function is reduced to a ghostly presence. As Schumpeter commented on John Maynard Keynes’s “General Theory” (1936), change–the outstanding feature of capitalism–was, in Keynes’s analysis, “assumed away.”

Progressive, ameliorative change is what poor people in poor countries need most of all. In “The Prosperity Paradox: How Innovation Can Lift Nations Out of Poverty,” Harvard Business School’s Clayton Christensen and co-authors Efosa Ojomo and Karen Dillon return the entrepreneur and innovation to the center stage of economic development and prosperity. The authors overturn the current foreign-aid development paradigm of externally imposed, predominantly government funded capital- and institution-building programs and replace it with a model of entrepreneur-led innovation. “It may sound counterintuitive,” the authors write, but “enduring prosperity for many countries will not come from fixing poverty. It will come from investing in innovations that create new markets within these countries.” This is the paradox of the book’s title.

END_OF_DOCUMENT_TOKEN_TO_BE_REPLACED

In writing Openness to Creative Destruction, Art Diamond has penned a timely and compelling discussion of innovative dynamism, words he chooses to describe the vital wealth-creating features of the US economy. As the book’s title suggests, Diamond, like Joseph Schumpeter before him, using lots of data and strong anecdotes, explains how innovation–the discovery and implementation of new products, services, and processes for providing them–drives prosperity. Dynamism, though not automatic but sometimes constrained by government regulation, relates to how growth, change and search for future equilibriums are features of US markets. A strongly written and deeply documented book, Openness deserves to be read by all who want a better understanding of how the US economy is performing now and how future performance can be improved.

(p. A7) PARIS–Speaking at the annual gathering of the business and political elite in Davos earlier this year, French President Emmanuel Macron invoked the spirit of one of his favorite early-20th-century thinkers, Joseph Schumpeter.
The economist is the father of “creative destruction,” the theory that innovation sustains growth by destroying old business models. The embrace of such thinking has made Mr. Macron, an investment banker turned head-of-state, a darling of the globalist set. But this time, Mr. Macron warned that disruption was descending into a battle for the survival of the fittest.
“Schumpeter is very soon going to look like Darwin. And living in a completely Darwinian world is not good,” Mr. Macron said.
France’s president is on a mission to save globalism from itself and, lately, that has become a lonely road.

For the full story, see:
Stacy Meichtry and William Horobin. “Macron Walks a Line on Globalism.” The Wall Street Journal (Saturday, April 21, 2018): A7.
(Note: the online version of the story has the date April 20, 2018, and has the title “Macron’s Lonely Road: Saving Globalism From Itself.” In the last couple of sentences quoted, the wording follows the online version rather than the slightly different print version.)

(p. A13) The Wythe Hotel sits in the heart of Williamsburg, a Brooklyn neighborhood directly across the river from Manhattan. Opened to rave reviews in 2012, the hotel offers luxury dining at Reynard restaurant and spectacular city views from the rooftop bar. (Beers: $11.) Not long ago, the Williamsburg waterfront was a postindustrial wilderness, abandoned but for squatting artists; today it’s lined with glass towers and strolling millennials. The Wythe, set in a 1901 factory that once produced barrels for local breweries, features rooms with exposed-brick walls, spare concrete floors and beds made from salvaged wood. The streetscape retains a gritty feel–except at 3 a.m. on a Saturday, when party kids pour out of the nearby nightclubs and limos jostle for curb space with Ubers.
It’s easy to mock such scenes. But the borough’s boom deserves to be taken seriously, argues Kay S. Hymowitz in her engaging book, “The New Brooklyn: What It Takes to Bring a City Back.” Ms. Hymowitz, a fellow at the Manhattan Institute, recounts how “a left-for-dead city”–“a cultural and economic peasant enviously eyeing the seigneur just across the East River”–has reinvented itself in recent decades and emerged as “just about the coolest place on earth.” What, she asks, turned Brooklyn into a global brand?
The history of the borough, according to Ms. Hymowitz, embodies what economist Joseph Schumpeter dubbed the “creative destruction” of capitalism–the continual obliteration of old modes of production by rising industries and new technologies. In colonial times, Dutch and English farmers tamed the lush hills of Long Island’s southwestern tip. Slavery flourished; the indigenous Canarsee people disappeared. In the 19th century, industrial growth annihilated the bucolic past, while immigration reshaped the city’s culture. Factories closed and capital fled in the postwar decades, shattering communities and leaving the built landscape to decay. That destruction, though, cleared the decks for another burst of creative energy–one that has made Brooklyn a model, and a cautionary tale, for the cities of tomorrow.

The book under review, is:
Hymowitz, Kay S. The New Brooklyn: What It Takes to Bring a City Back. Lanham, Maryland: Rowman & Littlefield Publishers, 2017.

(p. A9) As a boy, David Rockefeller idolized his big brother Nelson, a self-assured bon vivant who didn’t let the family name stand in the way of a good time–and sometimes furtively shot rubber bands at his siblings during the morning prayer periods imposed by their austere father.
David, by contrast, was shy, insecure and often lonely, retreating into his hobby of collecting beetles and reliant on tutors for companionship.
. . .
A family friend advised him that studying economics would dispel the idea that any job he obtained was due to his family’s influence. He took graduate courses at Harvard, including an introduction to economics from Joseph Schumpeter.
He furthered his studies at the London School of Economics, where his tutor was Friedrich von Hayek, a future Nobel laureate. He won a doctorate in economics from the University of Chicago in 1940 after writing a dissertation on overcapacity in industrial plants.