(p. A23) . . . Ronald Reagan believed in the possibilities of a country that was forever reinventing itself. He knew, too, that the nation had grown stronger the more widely it had opened its arms and the more generously it had interpreted Thomas Jefferson’s assertion of equality in the Declaration of Independence.

He was about hope, not fear. And that is another reason his farewell address should be more widely appreciated: It’s a kind of final testament of an American president who had a genuine faith in the future. Mr. Reagan was a practical man, and he knew, as he put it, that “because we’re a great nation, our challenges seem complex. It will always be this way. But as long as we remember our first principles and believe in ourselves, the future will be ours.”

Or so we can hope. His last words on that long-ago Wednesday bear hearing, and pondering. “And how stands the city on this winter night?” Mr. Reagan asked. “More prosperous, more secure and happier than it was eight years ago. She’s still a beacon, still a magnet for all who must have freedom, for all the pilgrims from all the lost places who are hurtling through the darkness, toward home.”

They hurtle through that darkness even now. Mr. Reagan would have us light the lamp and open our arms — for that’s what cities on a hill do.

(Note: the online version of the commentary has the date Jan. 10, 2019, and has the title “Warren Buffett’s Case for Capitalism.”)

(p. A17) . . . Ronald Reagan, in the last year of his presidency, delivered one of his most magnificent speeches . . . before a packed auditorium of students at Moscow State University.
. . .
Reagan’s ultimate aim was to plant the seed of freedom in the newly receptive furrows of a cracking totalitarianism.
. . .
Reagan delivered his Moscow speech standing before a gigantic scowling bust of Lenin and a mural of the Russian Revolution. He incorporated them as props in his address. “Standing here before a mural of your revolution,” he said, “I want to talk about a very different revolution,” a technological and “information revolution” that was transforming the world. How much progress had already been realized! But progress was not foreordained. “The key,” Reagan said, “is freedom–freedom of thought, freedom of information, freedom of communication.”

(p. R3) Starting in 1983, when Ronald Reagan was in the middle of his first presidential term, the American economy reeled off three straight years of 4% growth. The economy went on to hit that politically important target in nine of the next 17 years. In fact, even as Mr. Bush ran for re-election, the economy actually was revving up after a two-year lull, though the surge came too late for voters to realize it.
Then, at the turn into a new millennium, that streak stopped. In the last 15 years, the American economy hasn’t grown at a 4% annual rate even once.
But it isn’t just the U.S. In the last 15 years, according to International Monetary Fund data, exactly one of the traditional seven major industrialized nations achieved annual economic growth of 4%, one time: Japan in 2010.
In sum, the kind of economic growth that used to be relatively routine in the industrialized world has become virtually extinct.
This low-growth era leaves political leaders facing two unsavory tasks. The first is to explain to unhappy voters why growth is so anemic, and the second is to convince them that they know what to do about it.

(p. A9) Baldrige also knew how to use humor to deflate tense moments, as when the U.S. toy balloon industry petitioned for protection against cheap Mexican imports. Baldrige was opposed, but after debate the entire cabinet favored sanctions. Sensing this was not where the president wanted to go, Baldrige pulled from his pocket a dozen toy balloons and tossed them on the cabinet table. As the room filled with laughter, he said, “This is what we are talking about.” Reagan denied the sanctions.

The book under review, is:
Black, Chris, and B. Jay Cooper. Mac Baldrige: The Cowboy in Ronald Reagan’s Cabinet. Lanham, MD: Lyons Press, 2015.

(p. 9) Failure is in fashion these days. We read about failing fast and failing well, about grit incubated by repeated failure in school and innovation by repeated failure in business. So it may be a good time to consider the hidden virtues of failure in foreign policy. And who better to demonstrate those virtues than one of modern America’s great optimists?
On a Sunday evening in October 1986, Ronald Reagan returned to the White House after what he called “one of the longest, most disappointing — and ultimately angriest — days of my presidency.” He had spent more than 10 hours in discussions with Mikhail Gorbachev, in Reykjavik, Iceland, coming gut-­wrenchingly close to a breakthrough in United States-Soviet nuclear talks before everything fell apart. He was, in his personal assistant’s judgment, “borderline distraught.” Network news pronounced “the magic of the Reagan persona gone,” Gorbachev called him a “feebleminded cave man,” and even his own generals told him that his ideas “pose high risks to the security of the nation.” Soon, the Democrats would retake Congress, and the revelations of Iran-contra would spur talk of impeachment.
. . .
. . . foreign policy “failure” turned out to be the foundation of future accomplishment. 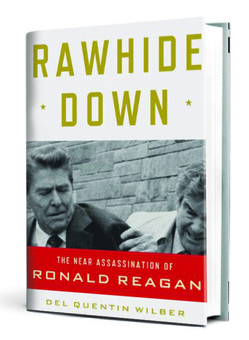 (p. C7) It has been nearly 30 years since President Ronald Reagan was shot outside the Washington Hilton Hotel on March 30, 1981. The attack is well remembered, but the details are not. One reason for the memory lapse, according to Del Quentin Wilber, the author of “Rawhide Down,” a newly revealing account of this potentially deadly attack, is that Reagan survived it so smoothly. Twelve days after being fired upon, he was back at the White House looking sensational. He ultimately enhanced his popularity by rebounding with such courage, resilience and even good cheer.
. . .
“Rawhide Down” is a fast-paced book that captures many points of view. Nurses and medical technicians have especially candid memories of the pressure they faced, the uncertainty about how to deal with such an important patient and the ad-hoc solutions they devised. They decided to call him Mr. Reagan rather than Mr. President; the situation would be less frightening that way. They were amazed by his joking, his courtesy and his general lack of V.I.P. attitude.
They were also impressed by his bravery. Throughout the incident the president had no clear idea of what had happened to him or what to expect. He struggled to breathe, brightened at any mention of the first lady and was canny enough to take his cues from technicians, who would be candid with him about what the doctors really meant. As he got ready to undergo chest surgery, one worker assured him that being taken from the E.R. to the operating room was a good thing. If he were really in peril, she said, doctors would never allow him to be moved.

The book under review is:
Wilber, Del Quentin. Rawhide Down: The Near Assassination of Ronald Reagan. New York: Henry Holt & Company, 2011. 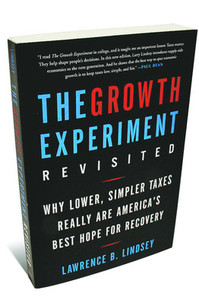 (p. 15) The 1980s boom was launched on the simple insight that, by lowering tax rates and regulatory hurdles and juicing the incentives to produce, innovate and take risks, the animal spirits of the American free-enterprise system would revive. Two seminal books hatched the supply-side revolution. The first was Jude Wanniski’s “The Way the World Works” (1978); the second, George Gilder’s “Wealth and Poverty” (1981).

Almost as influential, coming a few years later, was Lawrence Lindsey’s “The Growth Experiment” (1990). Slightly academic in nature, it was the first book to quantify the economic and revenue windfall of the 1981 Reagan across-the-board tax cuts. Mr. Lindsey’s conclusion was that Reagan’s 1981 tax act quickened the pace of production, which reduced the predicted revenue loss. His research found that although the Reagan tax cuts didn’t “pay for themselves,” the ones at the highest end of the income spectrum “did produce a revenue gain” because of “changes in taxpayer behavior.” He concluded that “the core supply-side tenet–that tax rates powerfully affect the willingness of taxpayers to work, save and invest, and thereby also affect the health of the economy–won as stunning a vindication as has been seen in at least a half-century of economics.”
He has now updated his book, taking us through the booms and busts of the past 20 years. It is a valuable project in part because Mr. Lindsey was a front-seat economic adviser to George W. Bush, serving as director of the National Economic Council and as one of the architects of the often-maligned 2001 and 2003 Bush tax cuts.
Mr. Lindsey’s central claim is that those tax changes saved the economy from the undertow of the financial meltdown at the end of the Clinton presidency.