Vicente Fox. Source of photo: online version of the NYT article quoted and cited below.

(p. 14) Is there anything to be done about the drug wars that are terrorizing Mexicans today and that have reportedly caused 25,000 deaths in the past three years?
That has to be dealt with together by the United States and Mexico. It’s a joint problem and a joint challenge. The U.S. provides the markets and guns that come back to Mexico and allow the cartels to be active.

(p. A19) You can’t read models, but you do talk to entrepreneurs in Racine and Yakima. Higher deficits will make them more insecure and more risk-averse, not less. They’re afraid of a fiscal crisis. They’re afraid of future tax increases. They don’t believe government-stimulated growth is real and lasting. Maybe they are wrong to feel this way, but they do. And they are the ones who invest and hire, not the theorists.

The Demand Siders are brilliant, but they write as if changing fiscal policy were as easy as adjusting the knob on your stove. In fact, it’s very hard to get money out the door and impossible to do it quickly. It’s hard to find worthwhile programs to pour money into. Once programs exist, it’s nearly impossible to kill them. Spending now creates debt forever and ever.
Moreover, public spending seems to have odd knock-off effects. Professors Lauren Cohen, Joshua Coval and Christopher Malloy of Harvard surveyed 42 years of government spending increases in certain Congressional districts. They found that federal spending increases dampened corporate hiring and investment in those districts. 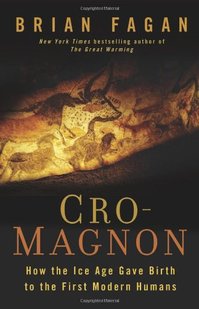 Biologically modern humans have inhabited the world for at least 50,000 years, and maybe for 100,000 years or more.
Only in the last 200 years, and especially the last 100 years, has humanity made substantial progress in the quality and quantity of life.
Usually the most recent 200 years are compared with the previous few thousand, because conditions in the previous few thousand years are much better known than those in the tens of thousands of years further in the past.
But comparisons further back are of interest, and Brian Fagan’s book Cro-Magnon is a source of some information that allows us to do so to some extent.
In the next few weeks, I will occasionally be quoting a few passages from Fagan that I believe are suggestive.

The reference for the Fagan book is:
Fagan, Brian. Cro-Magnon: How the Ice Age Gave Birth to the First Modern Humans. New York: Bloomsbury Press, 2010.

(p. A17) . . . it’s a good time to check in on the state of the Cuban health-care system. That’s just what Laurie Garrett, a senior fellow at the Council on Foreign Relations, does in the current issue of Foreign Affairs magazine.
. . .
Slightly more than half of all Cuban physicians work overseas; taxed by the Cuban state at a 66% rate, many of them wind up defecting. Doctors who remain in the country earn about $25 a month. As a result, Ms. Garrett writes, they often take “jobs as taxi drivers or in hotels,” where they can make better money. As for the quality of the doctors, she notes that very few of those who manage to reach the U.S. can gain accreditation here, partly because of the language barrier, partly because of the “stark differences” in medical training. Typically, they wind up working as nurses.
As for the quality of medical treatment in Cuba, Ms. Garrett reports that hospital patients must arrive with their own syringes, towels and bed sheets. Women avoid gynecological exams “because they fear infection from unhygienic equipment and practices.” Rates of cervical cancer have doubled in the past 25 years as the use of Pap tests has fallen by 30%.
And while Cuba’s admirers love to advertise the country’s low infant mortality rate (at least according to the Castro regime’s dubious self-reporting) the flip-side has been a high rate of maternal mortality. “Most deaths,” Ms. Garrett writes, “occur during delivery or within the next 48 hours and are caused by uterine hemorrhage or postpartum sepsis.”

Reference to the Garrett article:
Garrett, Laurie A. “Castrocare in Crisis; Will Lifting the Embargo Make Things Worse?” Foreign Affairs 89, no. 4 (July/August 2010): 61-73. 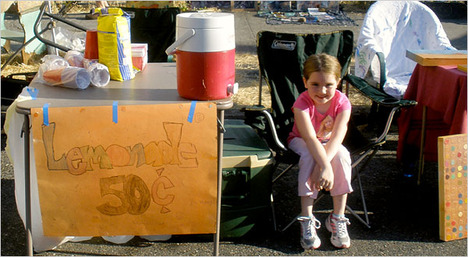 Julie Murphy and her lemonade stand. Source of photo: online version of the NYT article quoted and cited below.

(p. A8) When life gives you lemons, make lemonade.

When health inspectors cite you for it, get famous.
Julie Murphy, a 7-year-old Oregonian, set up a lemonade stand on July 29 at an art fair in northeast Portland. County health inspectors shut her down, however, telling Julie and her mother, Maria Fife, that they needed a temporary restaurant license, which costs $120. The penalty for selling food without a permit, they warned, was $500. At 50 cents a cup, that’s a lot of lemonade.
Others at the fair urged the family to give away the lemonade, and they wrote “free” and “suggested donation” on Julie’s sign with a marker. But the inspectors were unmoved.
Julie left the fair in tears.

(p. W9) A few years ago, Italian journalist Beppe Severgnini recounted his adventures in the U.S. in the book “Ciao, America!” in which he offered up humorous musings on many of the standard European complaints about the American way of living. Mr. Severgnini allows that he rather admires the Yankee “urge to control the outside world,” whether that means sending planes off an aircraft carrier or sending out technicians from Carrier.

He notes that the refusal to suffer the sweaty indignity of equatorial heat is “the antithesis of passive resignation,” and thus a perfect expression of the can-do American character. “In America, air-conditioning is not simply a way of cooling down a room,” Mr. Severgnini writes. “It is an affirmation of supremacy.” 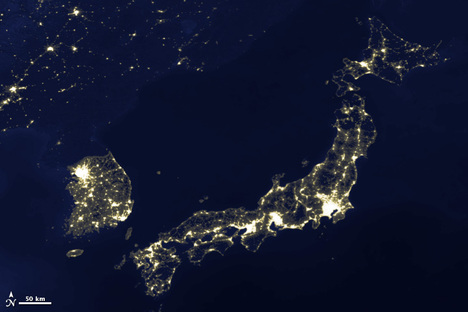 Credits:
I first saw a version of the above photo, and heard a version of the above interpretation, in a wonderful presentation by Tony Woodlief at the MBM University at Wichita in July 2010.
The photo is a satellite composite from NASA.
“Lux et Veritas” is the motto of Yale University and is Latin for “Light and Truth.” (Three years of high school Latin pay off again—thank you Miss Noble and Miss Rohrer!)