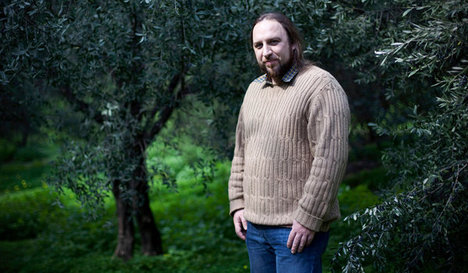 “Fotis Antonopoulos’s struggles to start OliveShop.com have made him a reluctant emblem of thwarted Greek entrepreneurship.” Source of caption and photo: online version of the NYT article quoted and cited below.

Vassilis Korkidis, who is quoted below, is (p. A3) “the president of the National Confederation of Hellenic Commerce, a trade association in Athens.”

(p. A1) ATHENS — It was about a year ago that Fotis I. Antonopoulos, a successful Web program designer here, decided he wanted to open an e-business selling olive products.

Luckily, he already had a day job.
It took him 10 months — crisscrossing the city to collect dozens of forms and stamps of approval, including proof that he was up to date on his pension contributions — before he could get started. But even that was not enough. In perhaps the strangest twist of all, his board members were required by the Health Department to submit lung X-rays — and stool samples — since this was a food company.
. . .
With Greece’s economy entering its fourth year of recession, its entrepreneurs are eager to reverse a frightening tide. Last year, at least 68,000 small and medium-size businesses closed in Greece; nearly 135,000 jobs associated with them vanished. Predictions for 2012 are also bleak.
But despite the government’s repeated promises to improve things, the climate for doing business here remains abysmal. In a recent report titled “Greece 10 Years Ahead,” McKinsey & Company described Greece’s economy as “chronically suffering from unfavorable conditions for business.” Start-ups faced immense amounts of red tape, complex administrative and tax systems and procedural disincentives, it said.
. . .
(p. A3) Part of Mr. Antonopoulos’s problem, Mr. Korkidis ventured, was his unwillingness to pay what is routinely referred to here as the “speed tax” — bribes to move things along.
Nor is Mr. Korkidis much of a fan of recent government efforts to improve things. He pointed to a pamphlet produced by the Ministry of Development, which explained a new “one-stop shop” program for new businesses.
“This doesn’t work,” he said. “You have to collect 10 papers first — and then it is one-stop shopping. Ridiculous.”
At 36, Mr. Antonopoulos is an aging computer whiz kid with long hair and an easy smile.
. . .
The worst moment, he said, was when representatives from two agencies came to inspect the shop and disagreed about the legality of a circular staircase. They walked out telling him that he “would have to figure it out.”
“At that point, we actually thought about just going to the U.K. with this,” he said. “One of the inspectors knew about new legislation. The other didn’t. And they just refused to come up with a solution.”
At one point, the company got a huge order from Denmark, he said. But the paperwork for what amounted to a wholesale transaction was so onerous that they decided not to even try to fill the order.

(p. 565) . . . I think . . . [Jobs] actually could have controlled himself, if he had wanted. When he hurt people, it was not because he was lacking in emotional awareness. Quite the contrary: He could size people up, understand their inner thoughts, and know how to relate to them, cajole them, or hurt them at will.
The nasty edge to his personality was not necessary. It hindered him more than it helped him. But it did, at times, serve a purpose. Polite and velvety leaders, who take care to avoid bruising others, are generally not as effective at forcing change. Dozens of the colleagues whom Jobs most abused ended their litany of horror stories by saying that he got them to do things they never dreamed possible. And he created a corporation crammed with A players. 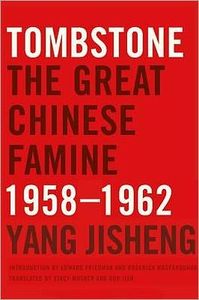 (p. C12) Yang Jisheng’s “Tombstone: The Great Chinese Famine, 1958-1962” exemplifies E.H. Carr’s famous dictum: “Study the historian before you study the facts.” Mr. Yang is not the first historian to exhume the darkest crime of the political party that still rules China but the first Chinese journalist and longtime Party member to do so. He uses the Party’s own historical records and the perpetrators’ own words to craft his devastatingly detailed indictment.

For the full review essay, see:
Sylvia Nasar (author of passage quoted above, one of 50 contributors to whole article). “Twelve Months of Reading; We asked 50 of our friends to tell us what books they enjoyed in 2012–from Judd Apatow’s big plans to Bruce Wagner’s addictions. See pages C10 and C11 for the Journal’s own Top Ten lists.” The Wall Street Journal (Sat., December 15, 2012): passim (Nasar’s contribution is on p. C12).
(Note: the online version of the review essay has the date December 14, 2012.)

(Wang, p. 1146) The last chapter of the book advances the supply-side analysis and presents the “Green Paradox,” that “(t)he mere announcement of intentions to fight global warming made the world warm even faster” ([Sinn, p. ] 189). The key insight is that demand-reduction measures affect carbon supply through pressure on future prices. Since the existing “green” policies almost always involve increasing stringency and widening coverage over time, the increasing downward price pressure therefore induces resource owners to expedite extraction and thereby exacerbates the climate problem.

The book under review is:
Sinn, Hans-Werner. The Green Paradox: A Supply-Side Approach to Global Warming. Cambridge and London: MIT Press, 2012.

“John Mackey.” Source of caption and photo: online version of the NYT article quoted and cited below.

(p. 16) In your new book, “Conscious Capitalism,” you write that Whole Foods sees its customers as its “most important stakeholders” and that the company is obsessed with their happiness. The biggest complaint I hear about Whole Foods is how expensive it is. Why not drop prices to make your customers happier?
People always complain about prices being too high. Whole Foods prices have dropped every year as we get to be larger and we have economies of scale. Also, people are not historically well informed about food prices. We’re only spending about 7 percent of our disposable personal income on food. Fifty years ago, it was nearly 16 percent.
. . .
In 2009, some Whole Foods customers organized boycotts after you wrote an op-ed in The Wall Street Journal expressing opposition to Obama’s health care proposals. Do you wish you hadn’t written it?
No, I don’t. I regret that a lot of people didn’t actually read it and it got taken out of context. President Obama asked for ideas about health care reform, and I put my ideas out there. Whole Foods has a good health care plan. It’s not a solution to America’s health care problems, but it’s part of the solution.
So did you vote for Romney?
I did.
I imagine a certain percentage of Whole Foods customers will also boycott because of this.
I don’t know what to say except that I’m a capitalist, first. There are many things I don’t like about Romney, but more things I don’t like about Obama. This is America, and people disagree on things.

(p. 553) Bill Gates had never lost his fascination with Jobs. In the spring of 2011 I was at a dinner with him in Washington, where he had come to discuss his foundation’s global health endeavors. He expressed amazement at the success of the iPad and how Jobs, even while sick, was focusing on ways to improve it. “Here I am, merely saving the world from malaria and that sort of thing, and Steve is still coming up with amazing new products,” he said wistfully. “Maybe I should have stayed in that game.” He smiled to make sure that I knew he was joking, or at least half joking. 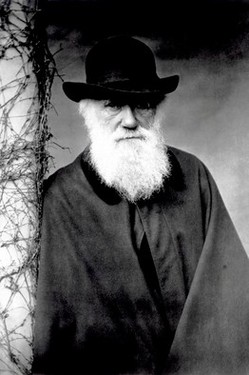 “SAGE OF AGES; Portrait of Charles Darwin in 1881, by Julia Margaret Cameron.” Source of caption and photo: online version of the WSJ article quoted and cited below.

No scientific innovator has ever taken more trouble to smooth the way for lay readers without descending into vulgarity. What is almost miraculous about the book is Darwin’s generosity in sharing his thought processes, his lack of condescension. There is no talking down, but no hauteur, either. It is a gentlemanly book.

In both style and substance, this passage is classic Paul Johnson.
. . .
What makes Darwin good, in the biographer’s estimation, is the scientist’s democratic dissemination of knowledge. Darwin triumphed with “The Origin of Species,” Mr. Johnson contends, not only because of his ability to portray the theory of evolution as the inescapable outcome of his decades of study and the work of fellow scientists, whom he was careful to praise, but because he was acutely aware that he had to present his notions of natural selection and survival of the fittest so as not to stir up public controversy. To an extraordinary degree, Darwin deflected attacks by couching his discoveries in terms of the plants he liked to examine and cultivate. He had relatively little to say about human evolution.