(p. B1) While film still is central in big Hollywood features, it’s unclear how long it will be before even the biggest feature movies go all- digital. The buzz in technical movie-making circles these days involves the two-month-old, ultra-high-resolution digital Red camera. Boosters say it looks nearly as good as 35mm film — and costs around $30,000, or about the same as renting a 35mm camera for 10 days.
Thanks to cheap computers, a similar sort of creative destruction is happening everywhere in the industry. Color adjustment used to require expensive oscilloscope-like monitors. It first moved to specialized — and expensive — software, but lately it’s done with relatively low- cost (say, $200) “plug-ins” by companies like Red Giant Software. 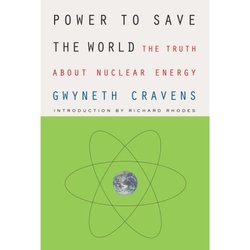 (p. D8) Start with a novelist and former New Yorker magazine fiction editor living on the East End of Long Island, a sometime antinuclear activist (remember Shoreham?) and a determined organic vegetable gardener who spent her childhood in 1950s New Mexico having atom-bomb nightmares. Team her with another lifelong greenie, a man with a doctorate in organic chemistry who grew up on an Idaho ranch without electricity and whose day job, over the course of a long career, has included pioneering something called probabilistic risk assessment (the underpinnings of climate-change analysis, but that’s another story). Send the pair off on a grand tour of the nuclear-power world, from dust-blown uranium mines to the depths of a pilot facility for Uncle Sam’s waste deposit at Nevada’s Yucca Mountain. And then wait for them to come back with the predictable diatribe against nuclear power.
Happily, you’ll wait in vain. “Power to Save the World” is a picaresque, flat-out love song to the bad boy of the great American energy debate — as good a book as we’re likely to get on a subject mired in political incorrectness, general unfathomability and essentially limitless gut fears. It’s also the latest plot point for one of the few unassailably positive byproducts of global-warming mania: the quiet emergence of pro-nuke greens, led by such impeccable apostates as Whole Earth founder Stewart Brand and James Lovelock, the British chemist best known for his Earth-is-a-living-organism “Gaia ypothesis.”

The passages below are from a WSJ summary of an October 12, 2007 article in The Chronicle of Higher Education:

(p. A7) After feeling increasingly alienated by college celebrations of black heritage, English Prof. Jerald Walker opted to redefine his role on campus.
. . .
Prof. Walker decided he had had enough during a commencement ceremony for black students. He had misgivings over the concept itself: “After so recently celebrating our country’s staunchest promoter of integration, I was being asked to celebrate segregation.”
Afterward, he made the decision that he would no longer participate in events simply because of the color of his skin. “I intend to be visible,” he says, “but only in ways I wish to be seen.” 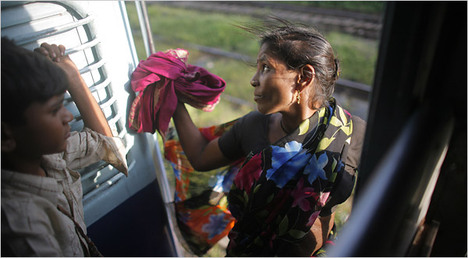 “Sarla Deepak Ire sells guavas on the Pushpak Express, from Lucknow to Mumbai, earning less than $3 a day.” Source of caption and photo: online version of the NYT article quoted and cited below.

(p. 3) ABOARD THE PUSHPAK EXPRESS, India — The man with neatly parted hair stood in the doorway of the hurtling train. And then, at the perfect moment, he jumped.
This was not about suicide, however. It was about tea.
Having popped out of the door, he clung to the knobs and rods of the train’s exterior with one hand. His other hand gripped a vat of scalding tea tied to his belt.
He glided like a rock climber across the train’s epidermis, from one foothold to the next. He reached the steel beam that connected the cars and walked it like a tightrope. Then, arriving at the next car, he hopped onto more footholds and, at last, ducked inside to utter his sales pitch: “Tea! Tea! Get your hot tea!”
Such acrobatics are not required on most of the world’s trains, nor in this train’s first- and second-class cars, which are connected with inside passageways. But this was third class on the Pushpak Express, a $6, 24-hour ride ferrying migrants from India’s bleak heartland to the thriving coastal megalopolis of Mumbai, formerly Bombay. And in an echo of the ancient caste system, these passengers are physically sealed off from the compartments of the luckier born.
These passengers are also part of a great migration that is changing the world. Goldman Sachs, which has published projections about the Indian economy, predicts that 31 villagers will continue to show up in an Indian city every minute over the next 43 years — 700 million people in all. This exodus, with a similar one in China, helped push the world over a historic threshold this year: the planet, for the first time, is more urban than rural.
. . .
Sonu Gupta, 15, was one of what the veterans call “new men.” With his wiry frame, he looked more like 10. He was traveling with a friend from his village. If he can find work in Mumbai, Mr. Gupta will become his family’s breadwinner. “I’m happy,” he said, “and I’m scared.”

The passages below are from a WSJ summary of an October 2007 article in Wired:

(p. B7) Scientists shouldn’t be so quick to squelch the results of failed experiments, Wired Deputy Editor Thomas Goetz says.
Even if data don’t deliver hoped-for results, they still have uses. This is especially the case today, when some compelling discoveries have come from meta-studies, in which statisticians sift the data of several papers to reach conclusions. “Your dead end may be another scientist’s missing link, the elusive chunk of data they needed,” Mr. Goetz says. Making such data available might one day fuel advances in genetics, neuroscience and biotechnology, he contends. 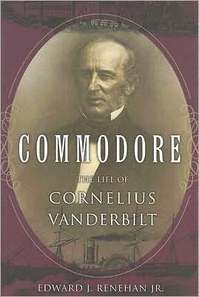 Source of book image:
http://a1055.g.akamai.net/f/1055/1401/5h/images.barnesandnoble.com/images/24530000/24539427.jpg
In an ideal world, a famous railroad mogul like Cornelius Vanderbilt, would be a consistent defender of technological progress. But moguls can differ in their motives and are not always consistent. Consider the following from a new biography of Vanderbilt:

(p. D9) The arrival a few years earlier of the first steamships, clanking loudly and belching flames and smoke, provoked scorn from sailors, who waved their hats in condescension and “sometimes also turned their backs, bent down, and revealed their bare ends to the dignified ladies and gentleman who had paid lofty prices to flirt with the future. Cornelius sometimes made such a salute.”

The quotes below from a WSJ summary of a Nov. 16, 2007 The Chronicle of Higher Education article, suggests that we do not need to worry about the sometimes-alleged “shortage” of scientists and engineers:

(p. B14) The federal dollars pumped into university science departments has created more scientists and engineers than the market wants, said Michael S. Teitelbaum, vice president of Alfred P. Sloan Foundation, which sponsors research, at a hearing in Congress last week. Mr. Teitelbaum said the federal government should find a way to adjust how it funds university research so that university departments don’t end up using the extra money to add graduate students and postdoctoral fellows