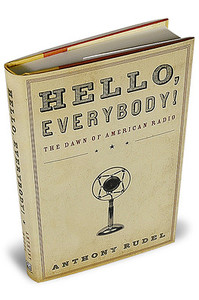 (p. A15) “Hello Everybody!” is at its most valuable when it chronicles the early regulatory fights over the new medium. In the days after World War I, the Navy pushed hard for control of all “wireless” facilities, which were then used primarily used for point-to-point messaging. If the admirals had succeeded in that grab, which was blocked by Congress, the advent of broadcast radio would no doubt have been delayed and the industry might have developed more along the lines of European radio, with a great deal of government control.

The reference to the book under review, is:
Rudel, Anthony. Hello, Everybody! Orlando, FL: Houghton Mifflin Harcourt Publishing Company, 2008.

“President Vaclav Klaus of the Czech Republic is known for his economic liberalism.” Source of caption and photo: online version of the NYT article quoted and cited below.

(p. A6) To supporters, Mr. Klaus is a brave, lone crusader, a defender of liberty, the only European leader in the mold of the formidable Margaret Thatcher. (Aides say Mr. Klaus has a photo of the former British prime minister in his office near his desk.)
. . .
As a former finance minister and prime minister, he is credited with presiding over the peaceful 1993 split of Czechoslovakia into two states and helping to transform the Czech Republic into one of the former Soviet bloc’s most successful economies.
But his ideas about governance are out of step with many of the European Union nations that his country will lead starting Jan. 1.
While even many of the world’s most ardent free marketeers acknowledged the need for the recent coordinated bailout of European banks, Mr. Klaus lambasted it as irresponsible protectionism. He blamed too much — rather than too little — regulation for the crisis.
A fervent critic of the environmental movement, he has called global warming a dangerous “myth,” arguing that the fight against climate change threatens economic growth.
. . .
Those who know Mr. Klaus say his economic liberalism is an outgrowth of his upbringing. Born in 1941, he obtained an economics degree in 1963 and was deeply influenced by free market economists like Milton Friedman.
Mr. Klaus’s son and namesake, Vaclav, recalled in an interview that when he was 13, his father told him to read Aleksandr Solzhenitsyn to better understand Communism’s oppressiveness.
“If you lived under communism, then you are very sensitive to forces that try to control or limit human liberty,” he said in an interview.

The comments of Maart Laar, former prime minister of Estonia, are worth considering:

World leaders have forgotten how the collapse of Wall Street in 1929 developed into a world-wide depression. It happened not thanks to market failures but as a result of mistakes made by governments which tried to protect their national economies and markets. The market was not allowed to make its corrections. Government interventions only prolonged the crisis.
We may hope that, even as we see several bad signs of neo-interventionist attitude, all the mistakes of the 1930s will not be repeated. But it is clear that the tide has turned again. Capitalism has been declared dead, Marx is honored, and the invisible hand of the market is blamed for all failures. This is not fair. Actually it is not markets that have failed but governments, which did not fulfill their role of the “visible hand” — creating and guaranteeing market rules. Weak regulation of the banking sector and extensive lending, encouraged by governments, are examples of this failure. 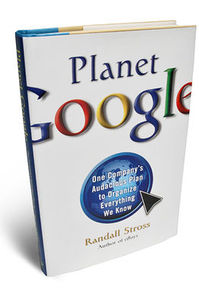 (p. A25) But Messrs. Page and Brin, when they launched Google, had no idea how to make money from it. Two years into their venture, they developed a service that delivered small text ads based on the search terms that a user submitted. As Randall Stross notes in “Planet Google,” his even-handed and highly readable history of the company, the service proved to be a turning point in the history of advertising, offering ads tailored for “an audience of one at the one best moment, when a relevant topic was on the user’s mind.” It also proved to be a goldmine for Google. The company started serving up ads in 2000. In 2002, it had revenues of $400 million; in 2005, $6.1 billion; in 2007, $16.5 billion. Roughly 99% of its income stills springs from those modest text ads that appear at the top of Google’s results page.
. . .
Is Google an unstoppable juggernaut fated not only to “organize all information” — as the company has itself put its goal — but to control it as well? Mr. Stross poses the question but does not answer it. He notes that one of Google’s ambitions is to usher in an age of “cloud computing,” in which all the work we do on our personal computers would actually take place on servers that Google owns. The servers would hold the programs we use and store our data. That image — Google as Skynet from the “Terminator” movies — is a mite unsettling.

Yet the evidence in “Planet Google” suggests that this eventuality is less likely than Googlers might hope. Outside its core search and advertising business, Google has had few successes. Its home-grown products, such as Orkut, Knols and Google Checkout (knockoffs of Facebook, Wikipedia and PayPal, respectively), have largely been failures. Google’s biggest successes have come from acquisitions. Google bought YouTube only after its own attempt at video on the Web, Google Video, crashed and burned. And even the “successful” acquisitions that Google has made — Google Earth, Google Maps, Google Docs and Blogger were all purchases, too — have taken up resources without creating significant revenue.
. . .
Remember, people thought that Microsoft was fated to rule the world, too. Today, the once-feared operating-system giant is fighting to stay relevant. And the evolutionary parallels between Google and Microsoft are strikingly similar: Both hit upon a Big Idea at the perfect moment; both parlayed it into a mountain of cash; and both used the money to embark on a string of expansions that paid few dividends. The years have brought Microsoft back to Earth. They’ll probably do the same to Planet Google.

he book under review is:
Stross, Randall E. Planet Google: One Company’s Audacious Plan to Organize Everything We Know. New York: Free Press, 2008.

(p. 127) High progressive and unnegotiable gouges like those in Sweden and England drive people altogether out of the country into offshore tax havens, out of income-generating activities into perks and leisure pursuits, out of money and savings into collectibles and gold, and, most important, out of small business ventures into the cosseting arms of large established corporations and government bureaucracies. The result is the demoralization of entrepreneurs and the stultification of capital. The experimental knowledge that informs and refines the process of economic growth is stifled, and the metaphysical capital in the system collapses, even while all the indices of capital formation rise. 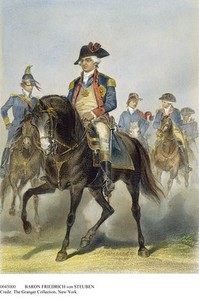 “German soldier of fortune and American ally Baron von Steuben (1730-94)” Source of caption and photo: online version of the WSJ review quoted and cited below.

(p. W9) The essence of Steuben’s achievement was his modification of the brutal, robotic precision of the Prussian system to fit American conditions. He was able to do this because he was one of the first foreign observers, military or civilian, to grasp an essential strain of the American character. “The genius of this nation,” he wrote a European friend, “is not in the least to be compared with that of the Prussians, Austrians or French. You say to your soldier, ‘Do this,’ and he doeth it. I am obliged to say, ‘This is the reason why you ought to do that,’ and then he does it.”
. . .
While Mr. Lockhart tends to soft-pedal some of Steuben’s more dubious deeds — ignoring, for instance, his attempt to interest Prince Henry of Prussia, Frederick the Great’s younger brother, in becoming king of the independent colonies before the adoption of the Constitution — the author generally treats his subject with balance, understanding and great good humor, aptly concluding that, “although he blurred a few details of the past in order to seek preferment in the United States, somewhere between his arrival and the achievement of American independence, the Baron became something very much like the man he had pretended to be.” 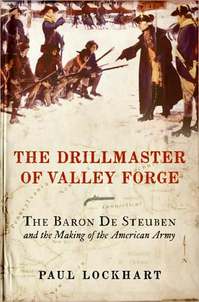