No surprise that the economist fellow-Austrian (at least by birth) Joseph Schumpeter was Mr. Drucker’s hero. In 1983, at the centennial of both Schumpeter and the then-legendary John Maynard Keynes, Mr. Drucker wrote in Forbes that Schumpeter’s centenary birthday would hardly be noticed. Yet “Schumpeter it is who will shape the thinking and inform the questions on economic theory and economy policy for the rest of this century, if not for the next 30 or 50 years.” Today Schumpeter’s emphasis on the crucial importance of entrepreneurship and “creative destruction” are now commonplaces.
As Mr. Drucker wrote over two decades ago, “The economy is forever going to change and is biological rather than mechanistic in nature. The innovator is the true subject of economics. Entrepreneurs that move resources from old and obsolescent to new and more productive employments are the very essence of economics and certainly of a modern economy. Innovation makes obsolete yesterday’s capital earnings and capital investment. The more an economy progresses the more capital formation — profits — will it therefore need.” These two men saw profits as a moral imperative, a genuine “cost” in the cost of staying in business because “Nothing is predictable except that today’s profitable business will become tomorrow’s white elephant.”

Source of image: Warner Brothers photo posted at: http://www.newsday.com/features/booksmags/sns-potter-movie-jpg,0,7776280.photogallery?coll=ny-homepage-bigpix2005
You can’t make a long and complex novel into a movie, even a long movie, without cutting and simplifying. Harry Potter and the Goblet of Fire is a good movie, but not as good as the book. Much has been said of the movie’s dark side. The book had a dark side too, but what is missing from the movie is a key element of the book’s light side: Dobby, the rascally, loyal, house-elf with the mismatched socks. For those who have seen the movie, without having read the book, here is one of my favorite (albeit serious) Dobby passages:

“Dobby has traveled the country for two whole years, sir, trying to find work!” Dobby squeaked. “But Dobby hasn’t found work, sir, because Dobby wants paying now!”
The house-elves all around the kitchen, who had been listening and watching with interest, all looked away at these words, as though Dobby had said something rude and embarrassing. Hermione, however, said, “Good for you, Dobby!”
“Thank you, miss!” said Dobby, grinning toothily at her. “But most wizards doesn’t want a house-elf who wants paying, miss. ‘That’s not the point of a house-elf,’ they says, and they slammed the door in Dobby’s face! Dobby likes work, but he wants to wear clothes and he wants to be paid, Harry Potter. . . . Dobby likes being free!” (p. 378; ellipsis in original)

China’s plans to vaccinate billions of chickens against avian flu could backfire and end up spreading the disease, poultry and vaccine experts warned last week.
Vaccination teams can easily carry the virus from farm to farm on their shoes, clothes and equipment unless they change or sterilize them each time, the experts said. That could be particularly difficult in a country like China, where the veterinary care system is underfinanced and millions of birds are kept in small flocks by families.
Also, experts said, the task is likely to be overwhelming, because the Chinese eat about 14 billion chickens a year, so mass vaccinations would have to be repeated again and again, while the risk of the disease being reintroduced by migratory birds, in which it is now endemic, would be constant.
Bird vaccination campaigns involve a huge amount of labor because the animals must be injected one by one. China’s Agriculture Ministry said last Tuesday that it would inject all of the nation’s 5.2 billion chickens, geese and ducks with a vaccine.
Vaccinators were partly to blame for an outbreak of exotic Newcastle disease in California that lasted from 1971 to 1973, Dr. Carol Cardona, a poultry expert at the University of California at Davis, said last week.
In that case, the disease arrived with South American parrots imported for pet stores and spread to commercial poultry farms, but the state tried to vaccinate all “backyard birds,” like home-raised poultry.
“It became very clear that the vaccination crews themselves actually spread the virus,” Dr. Cardona said. “It’s very likely that this may happen in China as well.”

After the film “A Beautiful MInd” on economist John Nash, The Economist suggests that there might be a market for movies about Keynes and Schumpeter. Here are there comments on the Schumpeter project:

Joseph Schumpeter. He said he wanted to be the world’s “greatest horseman, greatest lover and greatest economist”, and later claimed two of three—he and horses just didn’t get along. A perfect role, surely, for Tom Cruise, who was first choice to play Mr Nash. Schumpeter’s best-known theory even sounds like a Hollywood thriller: “Creative Destruction”. Now how would they merchandise that? 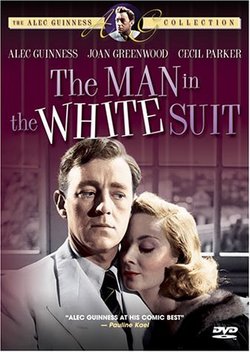 Source: Amason.com
From David Thomson’s Amazon.com review of the movie “The Man in the White Suit”:

The Man in the White Suit focusses on the destructive aspects of all new inventions. Although Joseph Schumpeter’s name is never mentioned, his creative destruction concept pervades the story line. Sidney Stratton (Alec Guinness ) a non-credentialled and eccentric scientist who creates a new cloth that apparently will not wear out nor get dirty. The overall human community will enormously benefit—but what about those people who earn a living in the impacted industry?

Apparently the evidence is mixed on the importance of patents as an incentive to innovation, though it always seemed intuitive to me that patents should matter. Petra Moser has just published research from his dissertation, that seems to add evidence on the side of patents mattering: