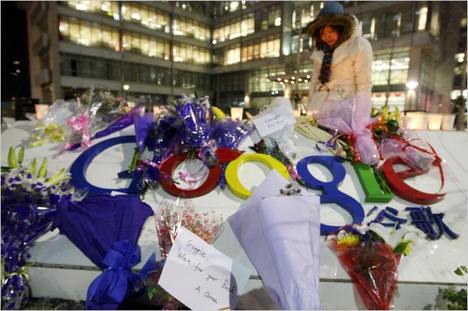 “A woman examined bouquets and messages left by Google users on Wednesday outside the Internet search company’s headquarters in Beijing.” Source of caption and photo: online version of the NYT article cited way below (after the citation to the quoted article, which is a different article).

David Smick in The World as Curved, has suggested that restrictions on the internet in China, limit entrepreneurship, and ultimately economic growth.

(p. 5) BEIJING — At the elite Tsinghua University here, some students were joking Friday that they had better download all the Internet information they wanted now in case Google left the country.

But to many of the young, well-educated Chinese who are Google’s loyal users here, the company’s threat to leave is in fact no laughing matter. Interviews in Beijing’s downtown and university district indicated that many viewed the possible loss of Google’s maps, translation service, sketching software, access to scholarly papers and search function with real distress.
“How am I going to live without Google?” asked Wang Yuanyuan, a 29-year-old businessman, as he left a convenience store in Beijing’s business district.
. . .
Li An, a Tsinghua University senior, said she used to download episodes of “Desperate Housewives” and “Grey’s Anatomy” from sites run by BT China that are now closed. “I love American television series,” she said with frustration during a pause from studying Japanese at a university fast-food restaurant on Friday.
The loss of Google would hit her much harder, she said, because she relies on Google Scholar to download academic papers for her classes in polymer science. “For me, this is terrible,” Ms. Li said.
Some students contend that even after Google pulls out, Internet space will continue to shrink. Until now, Google has shielded Baidu by manning the front line in the censorship battle, said a 20-year-old computer science major at Tsinghua.
“Without Google, Baidu will be very easy to manipulate,” he said. “I don’t want to see this trend.”
A 21-year old civil engineering student predicted a strong reaction against the government. “If Google really leaves, people will feel the government has gone too far,” he insisted over lunch in the university cafe.
But asked whether that reaction would influence the government to soften its policies, he concentrated on his French fries. “I really don’t know,” he said.

The reference to the Smick book is:
Smick, David M. The World Is Curved: Hidden Dangers to the Global Economy. New York: Portfolio Hardcover, 2008.