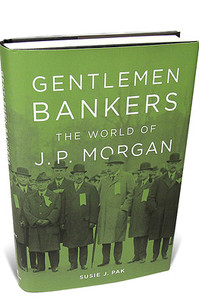 (p. A11) J.P. Morgan may well have been the most powerful banker who ever lived. Certainly he was the most powerful American banker. But the banking world that he and his firm dominated was a short-lived one, lasting only from the 1890s to the Depression of the 1930s. Susie J. Pak explores Morgan’s world, especially its social aspects, in “Gentlemen Bankers,” and the exploration is very interesting indeed.
. . .
In Wall Street at the time, there were two groups of private banking firms; those with Jewish partners and those with gentile ones. And while they did business together, often forming syndicates to handle large underwritings, they led separate social lives. They belonged to different clubs, stayed at different hotels and resorts. They didn’t attend the weddings of one another’s children. The reason, of course, was anti-Semitism. But as Ms. Pak notes, it had nothing to do with the ancient, religiously motivated anti-Semitism typical in Europe. This latter-day anti-Semitism was essentially social in character: To be blunt, it was fashionable to be anti-Semitic.
In earlier decades of the 19th century, affluent Jews had mingled socially with their gentile neighbors. They had been among the founding members of such old-line clubs as the Union Club (est. 1836) and the Union League Club (1863). Jesse Seligman, a partner in the well-regarded Jewish banking firm of J. & W. Seligman, was vice president of the Union League Club in 1893. But when he put his son up for membership that year, he was rejected. “Those who voted against him,” a biographer of the Seligman family wrote, “said they had nothing against him personally; they objected to his race.” His stunned father resigned from the club. He died the next year, aged 66; some said the incident contributed to his death.