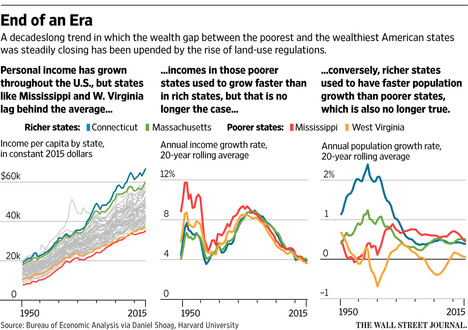 (p. A3) In this year’s election, candidates have focused blame for rising income inequality on broad economic forces, from globalization to the decline of the American manufacturing base. But a growing body of research suggests a more ordinary factor: the price of the average single-family home for sale, from Fairfield, Conn., to Portland, Ore.

According to research by Daniel Shoag, an associate professor of public policy at Harvard University, and Peter Ganong, a postdoctoral fellow at the National Bureau of Economic Research, a decadeslong trend in which the income gap between the poorest and richest states steadily closed has been upended by growth in land-use regulations.
Moving to a wealthier area in search of job opportunities has historically been a way to promote economic equality, allowing workers to pursue higher-paying jobs elsewhere. But those wage gains lose their appeal if they are eaten up by higher housing costs. The result: More people stay put and lose out on potential higher incomes.
. . .
Messrs. Shoag and Ganong looked at mentions of “land-use” in appeals-court cases and found the number of references began rising sharply around 1970, with some states seeing a much larger increase than others. For example, the share of cases mentioning land use for New York rose 265% between 1950 and 2010 and 644% in California during the same period. By contrast, it increased by only 80% in Alabama.

For the full story, see:
LAURA KUSISTO. “Land Use Rules Under Fire.” The Wall Street Journal (Weds., Oct. 19, 2016): A3.
(Note: ellipsis added.)
(Note: the online version of the story has the date Oct. 18, 2016, and has the title “As Land-Use Rules Rise, Economic Mobility Slows, Research Says.” A few extra words appear in the online version quoted above, that were left out of the print version.)

The research by Ganong and Shoag, mentioned above, is: