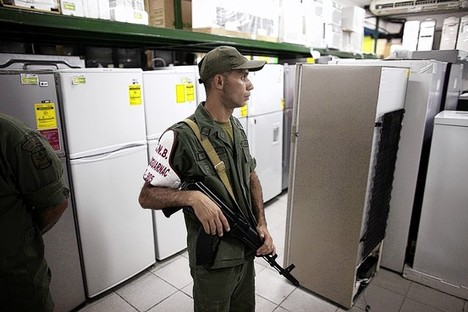 “A member of the National Guard stands guard during a inspection of prices at a store in La Guaira outside Caracas Jan. 12.” Source of caption and photo: online version of the WSJ article quoted and cited below.

(p. A8) CARACAS — President Hugo Chávez’s decision to devalue Venezuela’s currency in order to shore up government finances could backfire on the populist leader if the move leads to substantially higher prices and extends an economic downturn.

Just days after Mr. Chávez cut the value of the “strong bolivar” currency, some businesses were marking up prices. Shoppers jammed stores to stock up on goods before the increases took hold.
Amelia Soto, a 52-year-old housewife waited in line at a Caracas drugstore to buy 23 tubes of toothpaste. “Everywhere I hear that prices are going to skyrocket so I want to buy as much as I can now,” she said.
Airlines have doubled fares; government officials said they were looking into reports that large retail chains were also increasing prices.
. . .
The price increases are setting the stage for confrontations with authorities following Mr. Chávez’s orders to shut down retailers that raise prices.
. . .
The higher prices for consumer goods represent a huge liability for a country facing 27% inflation, one of the highest levels in the world.

For the full story, see:
DARCY CROWE and DAN MOLINSKI. “Prices in Venezuela Surge After Devaluation.” The Wall Street Journal (Weds., JANUARY 13, 2010): A8.
(Note: the online version of the article has the title “Venezuelans Rush to Shop as Stores Increase Prices.”)
(Note: ellipses added.)