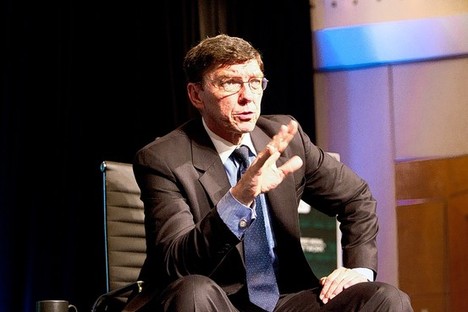 “‘God never said that finance and strategy are fundamentally different functions.’ –Clayton Christensen” Source of caption and photo: online version of the WSJ interview quoted and cited below.

MR. MURRAY: We’ve talked about the innovator’s dilemma, but what’s the solution?
MR. CHRISTENSEN: The financial function stands in the way of much of this. God never said that finance and strategy are fundamentally different functions, yet the business schools decided to teach strategy and teach finance. This gets implemented in companies where strategy is the responsibility of this group, and finance this group. And a lot of the things that make sense financially make no sense strategically.
. . .
MR. MURRAY: The United States has led the world in various types of innovation for much of the past century. Is that something that will continue?
MR. CHRISTENSEN: I am very worried about America. I was thinking about this hard over the past year. It turns out that the majority of the entrepreneurs that made Silicon Valley happen weren’t Americans. They were from Israel, China and India. We were a magnet to bring to our shores the best technologists in the world. Now our message to the rest of the world is, “You guys, we don’t want you.” The minute we say that and push those to Singapore and to Britain and elsewhere, I worry.