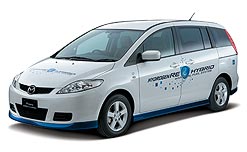 One of the difficulties in major changes in technology is how to handle the transition. Technologies that reduce the cost of the transition (I call them “bridge technologies”) can be important. Here is a potential example.

(p. D5) . . . with the Premacy concept, Mazda is attempting to combine this electric-motor engine with a combustion engine that is itself a kind of hybrid engine — one that can burn either gasoline or hydrogen, whichever the driver chooses. The company already has spent years developing such dual-fuel combustion engines and says they are now ready for the mass market. Mazda is expected to announce at the Tokyo Motor Show, which opens Oct. 22, that it will begin leasing a version of the RX-8 sports car in Japan with a combustion engine that burns hydrogen as well as gasoline.

Hydrogen is normally seen as an alternative energy source for use in cars powered by fuel cells, in which the chemical reaction between hydrogen and oxygen is used to generate electricity. Fuel-cell technology is attractive because it releases no harmful emissions, and Japan has roughly 15 government-run hydrogen stations to encourage the use of alternative fuels. More are expected.
But fuel-cell technology is also extremely expensive. Because of this, most industry experts think commercial use of fuel-cell cars is years, if not decades, away. That is why Mazda has been developing engines that burn hydrogen much like gasoline. Burning hydrogen, according to Mazda, is much more practical.