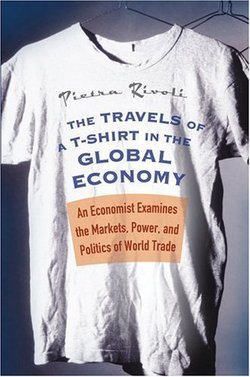 The protests occurred on ”a cold day in February 1999.” Ms. Rivoli was watching as students gathered at the gothic centerpiece of Georgetown to demonstrate against the International Monetary Fund, the World Trade Organization, and other putative villains of international trade. The crowd, Ms. Rivoli noticed with characteristic acuity, had ”a moral certainty, a unity of purpose” that permitted it to distinguish black from white and good from evil ”with perfect clarity.” One woman seized the microphone and asked: ”Who made your T-shirt? Was it a child in Vietnam? Or a young girl from India earning 18 cents per hour? Did you know that she lives 12 to a room? That she shares her bed and has only gruel to eat?”
Ms. Rivoli did not know these things, and she wondered how the woman at the microphone knew. But she decided to find out. In the rest of her narrative, the author tells the story of ”her” T-shirt, which she purchased for $5.99 by the exit of a Walgreen’s in Fort Lauderdale, Fla. ”It was white and printed with a flamboyantly colored parrot, with the word ‘Florida’ scripted beneath.” A company in Miami had engraved the front, after buying the shirt from a factory in China. The Chinese manufacturer had purchased the cotton used to make the shirt from Texas. Eventually it will end up as part of a large but little-known market for used clothing destined for resale in East African ports.
. . .
By looking across history to the shifting center of textile manufacturing from Manchester, England, to Lowell, Mass., to South Carolina to Japan and, finally, the developing nations of Asia, Ms. Rivoli discovers a universal truth. Without making light of the horrors experienced by workers, she asserts that their jobs were a little better than other available options (usually farm work) and, what’s more, that textile factories led to advances in industrialization and, just as dependably, in living standards. It is not too much to say that she uses the T-shirt to tell the story of progress.