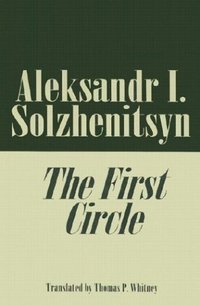 I remember Ben Rogge recommending The First Circle, decades ago when it first appeared in English. It is a powerful, courageous, wise work, bearing many lessons. As you read the book, you keep hoping you can find someone to blame for the evil that is happening. But as Solzhenitsyn works his way up the bureaucracy, each bureaucrat has a plausible motive for his part in evil; one motive, for example, is the protection of the bureaucrat’s family. Only when you reach Stalin, do you find someone who you can really despise. But he seems borderline crazy, so even he is not a totally satisfying villian.

The book can be seen as illustrating a point that Rogge often made: socialism is not bad because it is run by bad people; it is bad because it provides ordinary people incentives to do bad things. (These are not his words, but I believe they capture his point.)

Alexandr Solzhenitsyn. Source of image: online version of the NYT article quoted and cited below.

(p. A1) MOSCOW, Feb. 8 — A grandfatherly figure, his bearded face wrinkled into a smile, peers down from billboards around town.

It is surprise enough that the man is Aleksandr I. Solzhenitsyn, the once-exiled writer, Nobel Prize winner and, of late, octogenarian scold. It is even more so that the billboards advertise his adaptation — broadcast on state television, no less — of one of his fiercely anti-Soviet novels, “The First Circle.”

Solzhenitsyn has been called the conscience of the nation, but his reputation has risen and fallen as tumultuously as Russia itself since the collapse of the Soviet Union. “First Circle” has once again placed him on the national stage, reaching an audience that would have been inconceivable to him four decades ago, when he smuggled the book out of the Soviet Union.

A scene from the Russian mini-series version of The First Circle. Source of image: online version of the NYT article quoted and cited above.