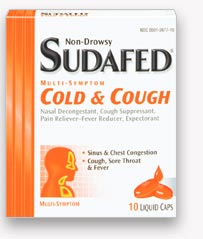 When I get a cold, nothing keeps me functioning as well as Sudafed Cold and Cough. Unfortunately, the pills contain pseudoephedrine, which apparently is an ingredient that can be used in the process of making meth. So in their zeal to protect people from their own bad choices, governments across the country, including my own Nebraska, have put increasingly severe restrictions on the sale and purchase of medicines like Sudafed Cold and Cough. Many stores that used to carry the medicine, have dropped it, and those that still carry it, have significantly increased the price.
So the government has made life harder for me. But at least they’ve benefitted the meth addicts, right? Read on:

(p. 1A) Restrictions on the sale of cold medicine appear to be reducing seizures of homemade methamphetamine labs in Nebraska and Iowa.
Both states passed laws last year restricting over-the-counter purchases of cold medicines used to make meth – and both report fewer lab discoveries.
But officials in the two states – and others with similar restrictions – now have a new problem: The drop in home-cooked methamphetamine has been met by a flood of crystal methamphetamine coming largely from Mexico.
Sometimes called ice, crystal meth is far purer, and therefore even more highly addictive, than powdered home-cooked meth.
And because crystal meth costs more, the police say thefts are increasing, as people who once cooked at home now have to buy it.
The University of Iowa Burn Center, which in 2004 spent $2.8 million treating people whose skin had been scorched off by the toxic chemicals used to make meth at home, says it now sees hardly any cases of that sort. Drug treatment cen- (p. 3A) ters, on the other hand, say they are treating just as many or more meth addicts.
And although Iowa child welfare officials say they are removing fewer children from homes where parents are cooking the drug, the number of children being removed from homes where parents are using it has more than made up the difference.

Apparently the only current substitute for pseudoephedrine in cold medicines is phenylephrine. But it has several drawbacks. Consider:

. . . pharmacologists, who specialize in the properties of medications, say oral phenylephrine has several disadvantages. First, the effects of the current formulations wear off faster than pseudoephedrine — meaning users will need to take a pill after four hours instead of up to six for the shorter-acting pseudoephedrine. Pseudoephedrine also comes in long-acting 12- and 24-hour pills, an option not currently available for over-the-counter phenylephrine.
Another question is whether oral phenylephrine is as effective as pseudoephedrine. There have been no major published head-to-head trials comparing the two, and neither Pfizer nor Germany’s Boehringer Ingelheim GmbH, a major supplier of powder phenylephrine for pills, has studied the matter. In 2003, Pfizer conducted a consumer survey in which 400 mall-goers with stuffy noses were given either standard Sudafed or Sudafed PE. In a telephone survey a week later, about 70% of each group reported “good” or “excellent” results, the company says.
But pharmacologists say there are reasons for caution. For one, oral phenylephrine is heavily absorbed by the intestine and broken down in the liver — so only 6% to 40% of the actual medicine makes it into the blood stream, compared with nearly all of pseudoephedrine, scientists say. Moreover, its use as a decongestant has been far less heavily studied than pseudoephedrine’s. The FDA review cited more than six studies, primarily unpublished work from a single laboratory, which found it effective. The review also cited a nearly equal number of studies from a variety of laboratories that found phenylephrine no better than a placebo — but the agency concluded overall that it does work. Little has been published since then.
The American Heart Association warns that both drugs can raise blood pressure, so people with high blood pressure or heart disease should consult their doctor before taking them. It isn’t known whether phenylephrine poses more or less of a risk than pseudoephedrine, though some experts say phenylephrine has been less tested so may merit more caution.
If a stuffy nose is making you miserable and only the most proven remedy will do, you may want to take the time to look for pseudoephedrine — even if it means you have to wait at the counter.