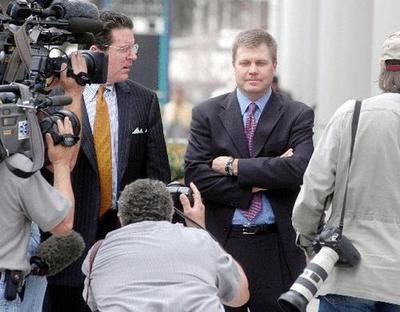 Kenneth Rice exiting a Houston federal courthouse on Thursday, Feb. 16, 2006. Source of image: the online version of the Omaha World-Herald article cited below.
A lot of people remember what they were doing when the first jet crashed into the twin towers on 9/11/01. I was listening to a presentation on the potential of broadband given by Kenneth Rice, at a forum sponsored by Creighton University. A day or two earlier, Creighton had presented Rice with a distinguished alumnus award. I don’t remember much detail about Rice’s presentation, but remember thinking that he gave a clear and informative analysis of the potential and risks of the broadband business.

(p. 1D) HOUSTON (AP) – Kenneth Rice, former chief of Enron Corp.’s struggling broadband unit, testified Thursday that his boss, Jeffrey Skilling, directed him to paint a rosy, misleading picture for the Enron board of directors that was in line with false statements Rice said he already made to financial analysts in 2001.
But Rice, the former CEO of Enron Broadband Services, said in his third day on the stand at the fraud and conspiracy trial of Skilling and founder Kenneth Lay that he had no documents and “only my recollection” to back up a conversation he had with Skilling, Enron’s chief executive, as he prepared for a May 2001 meeting of the company’s board.
“What I took from meeting with Mr. Skilling was he wanted me to put a presentation together that was more consistent with the analyst conference and less direct on some of the challenges we were facing at EBS,” Rice said.
In January 2001, Rice told Wall Street analysts who influenced the company’s stock price that the business was well positioned for strong long-term financial performance. In reality, however, Enron’s broadband unit was spending $100 million per quarter and generating little revenue and business, he said.