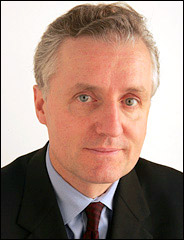 The Journal Sentinel, which endorsed John Kerry in 2004, has parted company with the Democratic Party on the voucher issue. It backed Republican efforts this year to expand the program, which has led to the creation of dozens of new private schools in Milwaukee.
“We’ve seen what school choice can do,” said Gregory Stanford, an editorial writer and a columnist at the paper. “It’s impressive to go around to the voucher schools and see kids learning. Their parents are much more satisfied with these schools. And the fears that the public schools would be hurt have turned out to be wrong.”
In fact, the students in public schools have benefited from the competition. Two studies by Harvard researchers, one by Caroline Hoxby and another by Rajashri Chakrabarti, have shown that as the voucher program expanded in Milwaukee, there was a marked improvement in test scores at the public schools most threatened by the program (the ones with large numbers of low-income students eligible for the vouchers).
The competition spurred the public system to shift power from the central administration to individual schools, allowing councils of parents and teachers to decide who should teach there, instead of forcing the schools to accept incompetent teachers just because they had seniority.
“Poor teachers used to shuffle from one school on to another in what we called the dance of the lemons,” says Ken Johnson, the head of the school board. “But we couldn’t let that continue once our students had the option to go somewhere else. We had to react to students’ needs. We had to start seeing them as customers, not just seat-fillers.”
Some of the new voucher schools have flopped — but the advantage of a voucher program is that a bad private school can be shut down a lot faster than a bad public school. And while critics complain that there still isn’t definitive evidence that voucher students are doing better over all in their new schools, the results so far in Milwaukee and other cities are more than enough to declare vouchers a success.
“All the good research, including the voucher opponents’ work, shows that kids who accept vouchers are doing at least as well as their public school peers,” says Joseph Viteritti of Hunter College. “That’s remarkable, considering how much less money is being spent on the voucher students.”
In Milwaukee, where the public system spends more than $10,000 per student, private schools get less than $6,400 for each voucher student. But when you see what can be done for that money, you realize what’s wrong with Democrats’ favorite solution for education: more money for the public-school monopoly.
. . .
The school principal, Denise Pitchford, worked in the public schools, but she took a pay cut in exchange for less red tape. “I wanted the flexibility to give immediate personal attention to every student,” she said. “To me, it represented less money but a better opportunity.” Just like the whole voucher program.