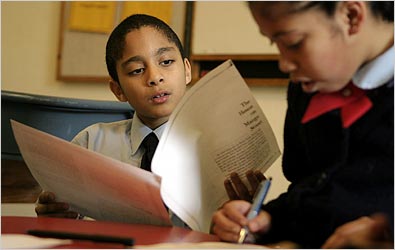 (p. A1) WASHINGTON, April 5 – As a student at Shaw Junior High School here, Amie Fuwa strained to shut out the distractions of friends cutting up. She struggled through math, and used photocopies or the library when textbooks were scarce.
Now Amie, 14, a child of immigrants from Nigeria and the Dominican Republic, attends Archbishop Carroll High School, a Catholic school near a verdant hill of churches nicknamed the Little Vatican. When algebra confounds Amie, her teacher stays with her after school to help, and a mentor keeps her on course.
”It’s a lot of people behind my back now,” Amie said.
Before, she said, she ”felt like it didn’t really matter to different people I know, like my teachers, if I failed.”
Amie is one of about 1,700 low-income, mostly minority students in Washington who at taxpayer expense are attending 58 private and parochial schools through the nation’s first federal voucher program, now in its second year.
Last year, parents appeared lukewarm toward the program, which was put in place by Congressional Republicans as a five-year pilot program, But this year, it is attracting more participation, illustrating how school-choice programs are winning over minority parents, traditionally a Democratic constituency.
Washington’s African-American mayor, Anthony A. Williams, joined Republicans in supporting the program, prompted in part by a concession from Congress that pumped more money into public and charter schools. In doing so, Mr. Williams ig- (p. A16) nored the ire of fellow Democrats, labor unions and advocates of public schools.
. . .
Like many other voucher students, Breanna Walton, 8, rises before dawn for the long bus ride from Northeast Washington, ”amongst the crime and drugs and all that,” in the words of her mother, April Cole Walton, to Rock Creek International, near Georgetown University. There, she learns Spanish with the children of lawyers and diplomats.
Ms. Walton said that her neighborhood school ”has broken down,” and that she would have done just about anything to keep Breanna from going there. ”Every child here should be able to say I’m going to set my sights high,” she said. ”I refuse to let my child be cheated.”
Patricia William, a single mother, said that at first she liked her son Fransoir’s public school, John Quincy Adams Elementary School, a tall sprawling building in the Adams Morgan neighborhood. Teachers seemed good, but overwhelmed. It was other parents, not teachers, Ms. William said, who told her that Fransoir was hyperactive. ”I was not getting quality information from them on time,” she said. ”For some reason, it was not working.”
Fransoir is one of 62 students with vouchers attending Sacred Heart Elementary, a Catholic school of 210 students, where he learns prayers along with five-digit multiplication and long division. He takes medication for his hyperactivity. Last year, he teamed up with another child to research the sinking of the Titanic. This year, he is interested in reptiles. Ms. William said her son today has nothing in common with the boy who once lay on the floor, turning in circles like a clock wound too tight. Now she is learning from him, about more than just math or reading or a sinking ship.
”All the effort he’s making every night makes me want to sit with him and study,” said Ms. William, a high-school dropout. ”I’m learning academically, but also about making an effort.”
. . .
. . . the pressure of competition is inescapable. In one sixth-grade classroom, two of six students said they would probably go to charter schools next year, unless Adams could get its seventh grade started.
”I’ll probably go to Washington Latin,” said Jhontelle Johnson, setting her sights on a new charter school opening in August. If not, she said, ”I’d probably be home-schooled.”
A teacher’s aide, Sheonna Griffin, looked askance. ”You don’t like public schools?” she asked the child.
Jhontelle turned back, her young eyes flashing. ”You can’t make me go,” she said. 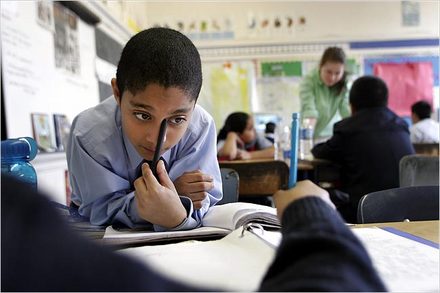