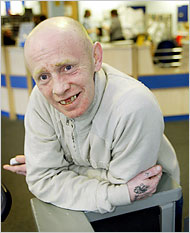 "William Kelly, 43, extracted part of his own tooth, leaving a black stump. He plans to pull one more."  Source of caption and image:  online version of NYT article cited below.

ROCHDALE, England, May 2 — "I snapped it out myself," said William Kelly, 43, describing his most recent dental procedure, the autoextraction of one of his upper teeth.

Now it is a jagged black stump, and the pain gnawing at Mr. Kelly’s mouth has transferred itself to a different tooth, mottled and rickety, on the other side of his mouth.  "I’m in the middle of pulling that one out, too," he said.

But the problem is serious.  Mr. Kelly’s predicament is not just a result of cigarettes and possibly indifferent oral hygiene; he is careful to brush once a day, he said.  Instead, it is due in large part to the deficiencies in Britain’s state-financed dental service, which, stretched beyond its limit, no longer serves everyone and no longer even pretends to try.

Every time he has tried to sign up, lining up with hundreds of others from the ranks of the desperate and the hurting — "I’ve seen people with bleeding gums where they’ve ripped their teeth out," he said grimly — he has arrived too late and missed the cutoff.

"You could argue that Britain has not seen lines like this since World War II," said Mark Pritchard, a member of Parliament who represents part of Shropshire, where the situation is just as grim.  "Churchill once said that the British are great queuers, but I don’t think he meant that in connection to dental care."

And now, discouraged by what they say is the assembly-line nature of the job and by a new contract that pays them to perform a set number of "units of dental activity" per year, even more dentists are abandoning the health service and going into private practice — some 2,000 in April alone, the British Dental Association says.

The system, critics say, encourages state dentists to see too many patients in too short a time and to cut corners by, for instance, extracting teeth rather than performing root canals.

Claire Dacey, a nurse for a private dentist, said that when she worked in the National Health Service one dentist in the practice performed cleanings in five minutes flat.

Moreover, she said, by the time patients got in to see a dentist, many were in terrible shape.

"I had a lady who was in so much pain and had to wait so long that she got herself drunk and had her friend take out her tooth with a pair of pliers," Ms. Dacey said.