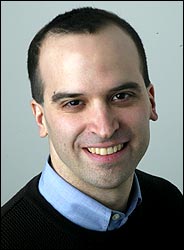 A few years ago, stories about a scary new kind of outsourcing began making the rounds.  Apparently, hospitals were starting to send their radiology work to India, where doctors who make far less than American radiologists do were reading X-rays, M.R.I.’s and CT scans.

It quickly became a signature example of how globalization was moving up the food chain, threatening not just factory and call center workers but the so-called knowledge workers who were supposed to be immune.  If radiologists and their $350,000 average salaries weren’t safe from the jobs exodus, who was?

On ABC, George Will said the outsourcing of radiology could make health care affordable again, to which Senator Charles E. Schumer of New York retorted that thousands of American radiologists would lose their jobs.  On NPR, an economist said the pay of radiologists was already suffering. At the White House, an adviser to President Bush suggested that fewer medical students would enter the field in the future.

"We’re losing radiologists," Representative Sherrod Brown, an Ohio Democrat, said on CNN while Lou Dobbs listened approvingly.  "We’re losing all kinds of white-collar jobs, all kinds of jobs in addition to manufacturing jobs, which we’re losing by the droves in my state."

But up in Boston, Frank Levy, an economist at the Massachusetts Institute of Technology, realized that he still had not heard or read much about actual Indian radiologists.  Like the once elusive Snuffleupagus of Sesame Street, they were much discussed but rarely seen.  So Mr. Levy began looking.  He teamed up with two other M.I.T. researchers, Ari Goelman and Kyoung-Hee Yu, and they dug into the global radiology business.

In the end, they were able to find exactly one company in India that was reading images from American patients.  It employs three radiologists.  There may be other such radiologists scattered around India, but Mr. Levy says, "I think 20 is an overestimate."

2 thoughts on “Radiologist Outsourcing Is Mainly a Myth”